The bold and beautiful Bollywood actress and the former beauty queen Urvashi Rautela shared her view about women in her latest Instagram video. Urvashi took to Instagram , where she shared a video of herself with caption “you can’t knock a girl off a pedestal she built for herself‘. She is seen dressed in swimming costume (bottle green) with black sunglass.

Urvashi Rautela is keeping her fans entertained with fun and interesting videos on social media during lockdown period. She took to Instagram and posted a video where she said ‘she built for herself‘

In her last Instagram post, Urvashi Rautela shared a video of herself dancing on a song titled “Party in the house’ . She captioned the video ‘ I want to get quarantined and house party with you – flirting in 2020 Directed by yours truly U.R”

Meanwhile, the actress is looking forward to release of her film “Virgin Bhanupriya” on the OTT platform. She has assured fans that the experience of watching the movie on a digital platform will be no less than watching it in big screens.

The hot and beautiful Urvashi Rautela made her Bollywood debut with 2013 release ‘Singh Saab the Great’ . She has played vital roles in a number of movies such as Sanam Re, Great Grand Masti , Hate Story 4 and Pagalpanti. 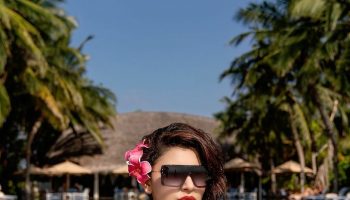