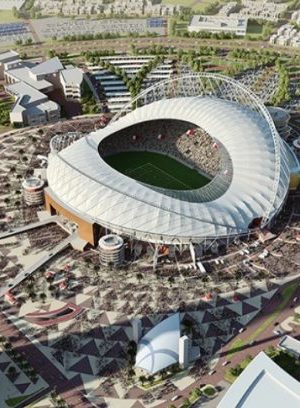 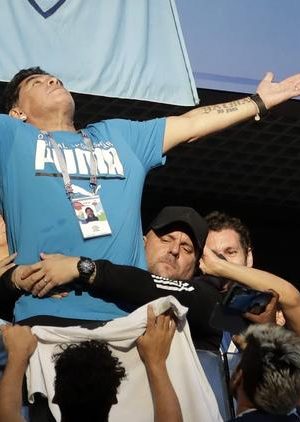 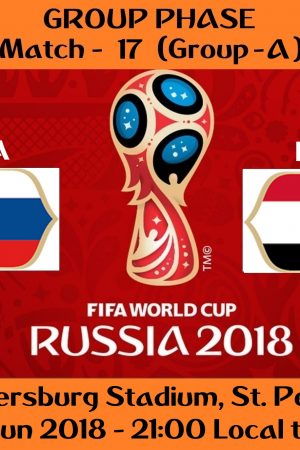 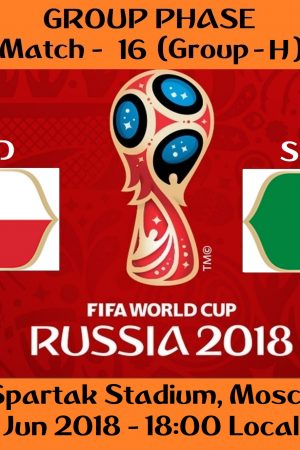 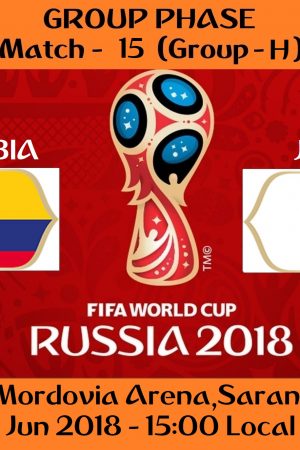 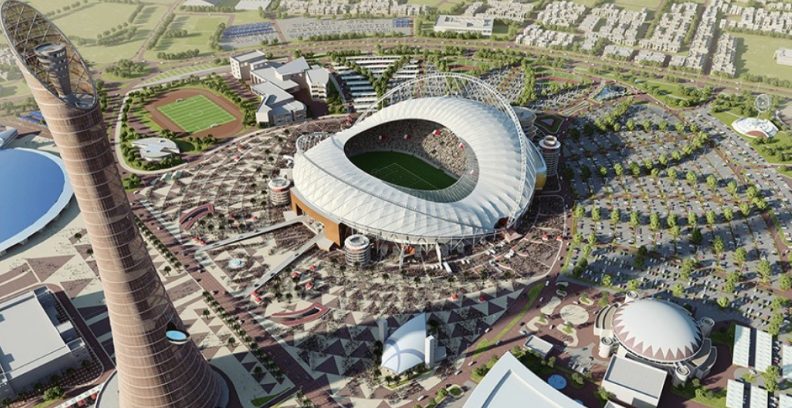 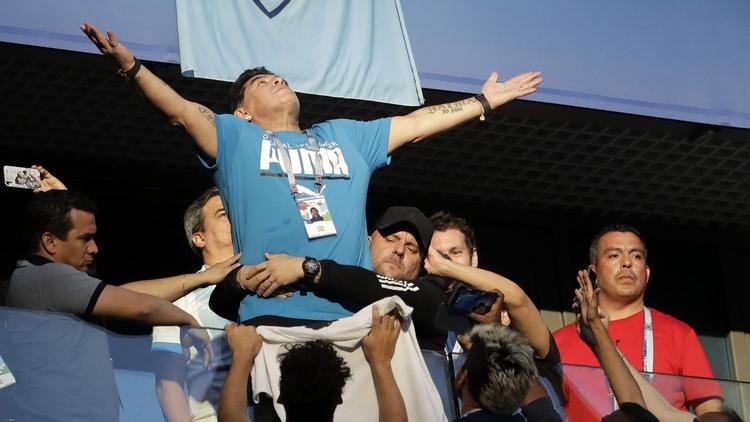 Football legend Diego Maradona has reassured fans that he is fine after he was treated by doctors during Argentina’s dramatic World Cup win over Nigeria on Tuesday.

Maradona was an animated presence during Argentina’s 2-1 victory in St Petersburg, with pictures showing the 57-year-old celebrating wildly and directing a middle-finger salute at hecklers below following Marcos Rojo’s 86th-minute winner. The win ensured Argentina progressed to the knockout stages of the competition.
“I want to tell everyone that I am fine, that I am not, neither was I interned,” Maradona posted on Instagram along with a picture of him being assisted by what appears to be a medic.
“In the halftime of the game against Nigeria, my neck hurt a lot and I suffered a decompensation.”

Maradona’s performance in the stands was as eye-catching as the one produced on the field by Lionel Messi in Argentina’s 2-1 win over Nigeria, which spared the South American nation an early elimination from the World Cup.

And that’s the problem.

Maradona might be Argentina’s No. 1 fan at the World Cup, but he’s also proving to be an unwanted — and sometimes embarrassing — distraction, increasingly casting a shadow over a team trying to win soccer’s biggest prize.

The good news is that, according to Maradona himself, he is OK after his wild night inside St. Petersburg Stadium, during which he required medical treatment and was pictured with his eyes closed for parts of the game. Before kickoff, footage showed him dancing with a Nigeria fan in the area in front of his executive box.

“I want to tell everyone that I am fine, that I am not, neither was I interned,” the 57-year-old Maradona wrote on Instagram alongside a picture of himself with medical staff.

“In the halftime of the game against Nigeria, my neck hurt a lot,” he added. “I was checked by a doctor and he recommended me to go home before the second half.”

But he didn’t. He stayed on to see Argentina score an 86th-minute winner by Marcos Rojo, and celebrated by aggressively giving a middle-finger salute with both hands toward spectators below him.

“I wanted to stay because we were risking it all,” Maradona wrote. “How could I leave?”

Soon after the final whistle, he needed help getting out of the stands and into an adjoining luxury box. Hours later, he was photographed smiling at an airport. Another photo posted on Twitter by a Colombian television journalist showed him sitting on a plane reportedly heading for Moscow.

“I send a kiss to everyone,” Maradona said at the end of his Instagram message, “thanks for the support!”

Maradona’s antics raised more concerns over the health of one of the sport’s most iconic players, who led Argentina to the World Cup title in 1986 — scoring the famous “Hand of God” goal along the way — and later coached the national side at the 2010 World Cup. He is worshipped in his home country, where is known as the “Pibe de Oro” (“Golden Boy”), and by soccer fans throughout the world.

https://instagram.com/p/Bkgtn_ahCQo/?utm_source=ig_embed
“I was checked by a doctor and he recommended me to go home before the second half, but I wanted to stay because we were risking it all. How could I leave? I send a kiss to everyone, thanks for the support!”
Maradona captained Argentina to World Cup triumph in 1986, scoring one of the greatest goals of all time in a quarterfinal victory over England as well as the infamous “Hand of God” goal.

But he has battled cocaine use and obesity, which affected him at the end of an illustrious playing career that finished in 1997. Hospitalized in 2000 and again in ’04 for heart problems blamed on cocaine, Maradona was treated at a hospital again in 2007 for acute hepatitis that his doctor blamed on excessive drinking and eating.

At this World Cup, it seems there are as many cameras trained on Maradona during matches as there are on Argentina’s players. He stood with his arms outstretched and looked to the sky at one point during the game against Argentina. Below him were spectators with their smartphones out, eager to catch a glimpse of a soccer great who, to some, is damaging his reputation.

“The people in Argentina laugh at him at the moment. We feel sad,” said Oscar Cicchilli, a 68-year-old Argentina fan from Buenos Aires who was in St. Petersburg for the Argentina-Nigeria game.

“He has a difficult personality. He has problems.”

No other figure or former player is overshadowing their national team like Maradona is with Argentina at the World Cup. Then again, few have the emotional mood swings, box-office temperament and backstory that Maradona has.

Cicchilli doesn’t think Maradona’s antics are affecting the team in Russia. He isn’t currently linked to the Argentine FA, so no members of the federation were willing to comment about him following Tuesday’s game.

The world now awaits the next installment of the Maradona story, at Argentina’s round-of-16 match against France in Kazan on Saturday. 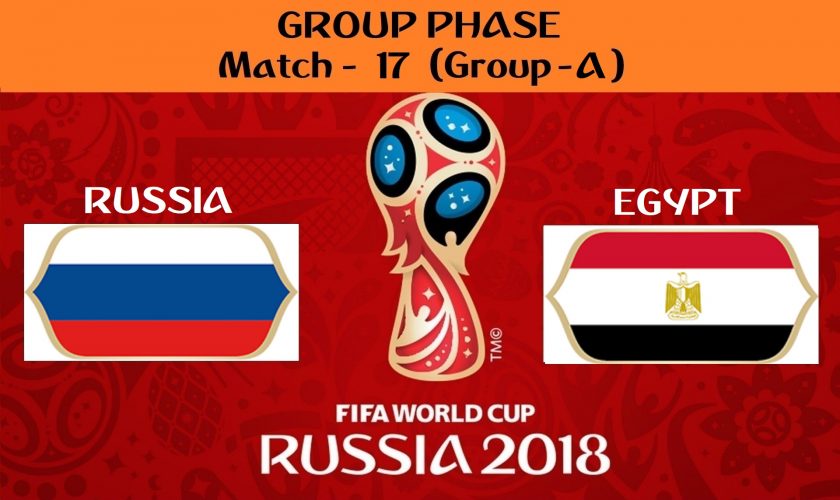 Denis CHERYSHEV
RUSSIA
Has been elected Budweiser Man of the Match 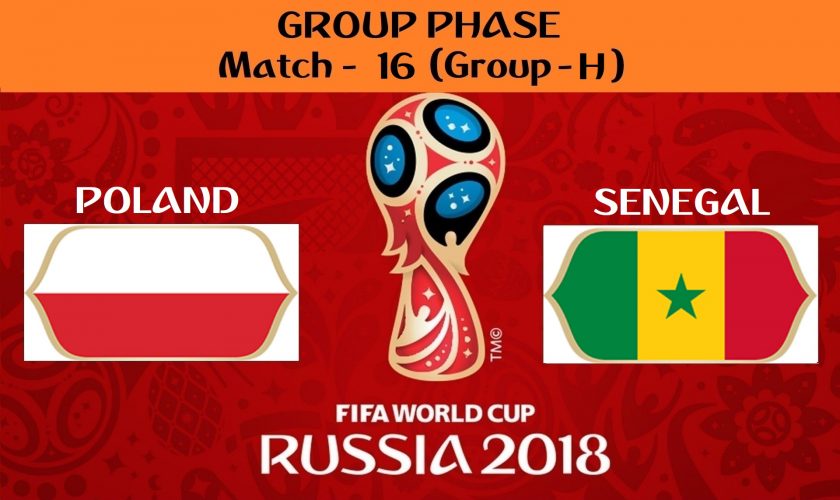 Mbaye NIANG
SENEGAL
Has been elected Budweiser Man of the Match 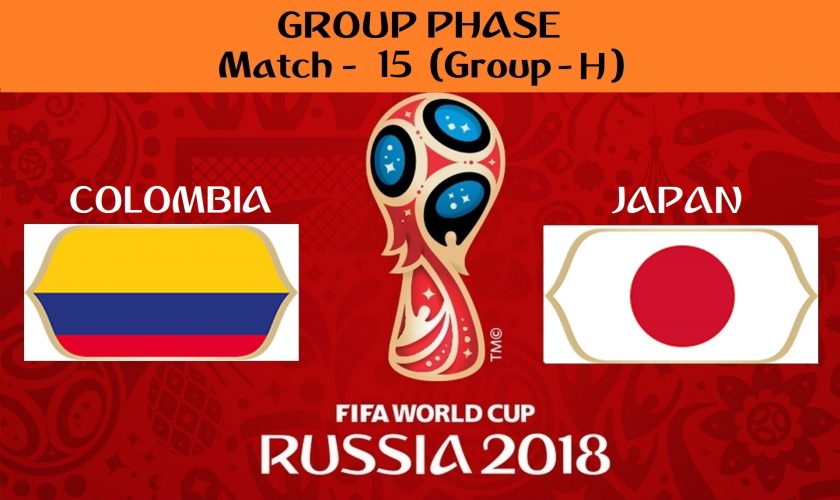 Yuya OSAKO
JAPAN
Has been elected Budweiser Man of the Match

Following an absence of 12 long years, Sweden marked their return to the FIFA World Cup™ in style in the opening match of Group F. The desire of Janne Andersson’s charges was there for all to see as they emerged victorious over a disappointing Korea Republic

Sweden starts with Marcus Berg and Ola Toivonen in the attack in its opening game at the World Cup against South Korea. Berg and Toivonen lead Sweden’s forward line in the country’s first World Cup appearance since 2006. Sweden is now without striker Zlatan Ibrahimovic, who retired after the 2016 European Championship and ultimately failed in a bid to make a comeback to the squad for Russia.

Sweden marked their first appearance in the World Cup for 12 years by beating South Korea thanks to a penalty from captain Andreas Granqvist that was awarded after a video assistant referee (VAR) review. There was a short delay for Kim Min-woo’s foul on Viktor Claesson to be analysed on video and for the referee to point to the spot but it did not affect Granqvist, who sent goalkeeper Cho Hyun-woo the wrong way.

Sweden, who join Mexico at the top of Group F on three points, created the better chances in Nizhny Novgorod.

Marcus Berg should have scored midway through the first half but his close range shot was beaten away by Cho, while South Korea did not manage a single shot on target.

Turning the clock back 60 years – the stats

This was Sweden’s first win in their opening match at a World Cup since beating Mexico 3-0 as hosts in 1958, drawing five and losing two since then.

South Korea, competing in their ninth successive World Cup, were disappointing and the closest they came to scoring was when Hwang Hee-chan headed wastefully wide in the closing moments. The result means Mexico, 1-0 winners over world champions Germany on Sunday, and Sweden have a three-point lead at the top of Group F after the first round of matches.

Sweden reached Russia by beating France in a group game on the way to finishing above the Netherlands in the table and reach the play-offs, when they overcame Italy.

Sweden is led by captain and central defender Andreas Granqvist and also has attacking midfielder Emil Forsberg in the starting lineup on Monday. But, in a surprise, defender Victor Lindelof missed out on a starting spot and Pontus Jansson takes his place.

South Korea has pinned its hopes on an attacking trio of Son Heung-min of Tottenham, Kim Shin-wook and Hwang Hee-chan, who all start the Group F match in Nizhny Novgorod. Captain Ki Sung-yueng is in midfield for South Korea, which has won just two games at the World Cup since its run to the semifinals at home in 2002.

However, they arrived in Russia without a goal in their previous three matches and without Zlatan Ibrahimovic after his retirement from international football.

Indeed, Janne Andersson’s team looked to be heading for a goalless draw until the second-half penalty – the seventh spot kick to be awarded at the tournament. There was little doubt about the validity of the penalty as replays showed Claesson, who plays his club football in Russia, was clearly caught.

Granqvist, 33, kept his nerve to become the oldest player to score on his World Cup debut since Martin Palermo, who was 36 when he netted for Argentina in 2010.

Budweiser Man of the Match
Captain Andreas Granqvist marshalled the Swedish backline throughout the game, initiated countless attacks and took charge of scoring the penalty that gave his side victory.

In doing so it meant the proportion of the 26 goals scored so far at this World Cup from the penalty spot rose to 19%.

It was however a gritty rather than spectacular performance from the Swedes, who lost Manchester United centre-back Victor Lindelof on the morning of the game due to illness.

His place was taken by Pontus Jansson but the Leeds United defender had little to do against lacklustre opponents.

Jansson wasted a chance to make an impression at the other end of the pitch when he rose unmarked at a corner but headed straight at the keeper.

With world champions Germany – smarting from their opening-game defeat – up next, this was a vital win for Sweden. South Korea did not win a game at the 2014 World Cup and they now face a battle to qualify from a tough group after this lacklustre performance.

Having qualified by finishing second behind Iran in a six-team group, they were hoping to at least match their efforts of 2010 when they reached the last 16 in South Africa.

But this was a lethargic display and their failure to test keeper Robin Olsen will be a big concern for boss Shin Tae-yong.

After an impressive season with Tottenham, Son Heung-min would expect to make a mark in Russia but he was largely anonymous other than one impressive run in the first half.

Only when they fell behind did South Korea add some much needed urgency into their play.

However, their day to forget was summed up when the unmarked Hwang headed wide from eight yards.

They join #MEX on three points in Group F after today's result against #KOR#WorldCup pic.twitter.com/K4EQFaRY7F

Who will be the first to find the net in Nizhny Novgorod? #SWEKOR pic.twitter.com/XrjcIQYa1I