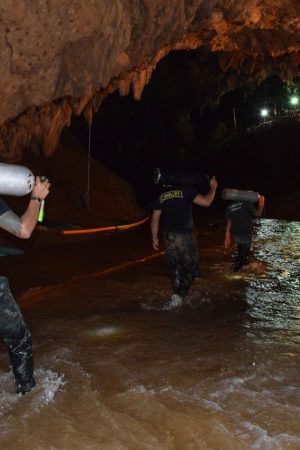 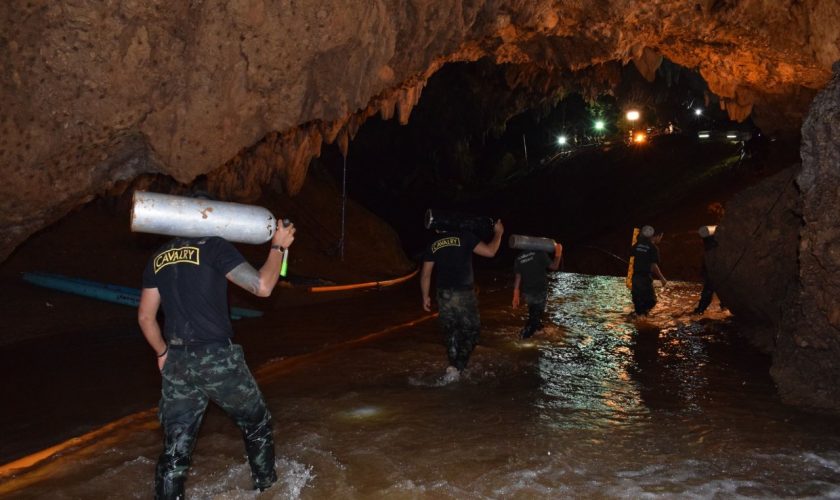 The second phase is underway of the rescue of the boys and their coach trapped in a cave in Thailand, officials said. The rescue operation started around 11 a.m. local time (midnight ET) and will take several hours.

Multiple sources tell CBS News correspondent Ben Tracy rescue workers have carried the first person from this phase on a stretcher to an ambulance, and a sixth may be nearing the surface. The boys, ages 11-16, and their 25-year-old coach became stranded when they went exploring in the cave after a practice game. Monsoon flooding blocked off their escape and prevented rescuers from finding them for almost 10 days.

The four who were rescued were taken to a hospital in Chiang Rai for evaluation. Two divers were assigned to each child to help them navigate the dangerous, narrow passageways. It could take two to four days complete the mission, officials said.

On Friday, the death of a former Thai navy SEAL underscored the risks. The diver, the first fatality of the rescue effort, was working in a volunteer capacity and died on a mission to place oxygen canisters along the route.

Heavy rain started falling as soon as the four were removed from the cave. Narongsak said experts told him the new rain could shrink the unflooded space where the boys are sheltering to 108 square feet. After more than a week of searching the flooded cave complex, and then days of planning a daring and increasingly desperate rescue, divers safely evacuated four of 13 members of a youth soccer team on Sunday.

Nine remained behind, waiting their turn to escape, as of early Monday morning. The boys on the team range in age from 11 to 16, and the coach with them is 25.

One by one, the first four to be rescued emerged after a treacherous, hourslong journey through the tight, underwater passageways of Tham Luang Cave. Skilled cave divers, part of a team assembled from around the world, hugged the four to their bodies as they swam through the dark.

The rescue was far from over — but it was a remarkable turn in the 16-day drama that has captivated Thailand and the world.

“Today, everything was very smooth,” Mr. Narongsak told a throng of reporters at a news conference. “Today is the best day, with the best situation of the weather, the health of the boys and the water level.” Interior Minister Anupong Paojinda had said early Monday that the same divers who took part in Sunday’s rescue would return to extricate the others as they know the cave conditions and what to do. He had said fresh air tanks needed to be laid along the underwater route.

Officials say rescued boys are hungry but in good health

Thai authorities said the four boys rescued from the cave are hungry but in good health.

The chief the rescue mission said they are being kept apart from relatives because of infection concerns, Reuters reports. The rescued boys are in quarantine, BBC News reports.

The divers are expected to go back into the cave Monday, said Washington Post reporter Shibani Mahtani, who is in Mae Sai. She said the supplies need to be restocked, mainly the oxygen tanks since the government said they had depleted their oxygen tanks.

The rescuers need to also check on the boys who are still there and make sure they are strong enough to be rescued.

The boys and the coach are coming out through a buddy system, and she said she has heard some “pretty dramatic scenes of the rescue.”

For the boys in the region, soccer is “really a way of life.” As for the coach who has been trapped with the boys, Mahtani said she has learned he has a “tragic” story. He was orphaned after a disease spread through his town, killing his parents and his younger brother. He moved to a monastery, but has moved back to the region to care for an ailing grandmother.

“It does seem he has dedicated a lot of himself to the team,” Mahtani said.

Mahtani said the community where boys are from is “definitely a small town … not a rich town.” She said a lot of people in the region are refugees, and move back and forth between Thailand and Myanmar.

“It’s an extremely close-knit community,” she said. “For sure, this is the biggest thing that has happened here, maybe in forever.”

Australia’s foreign minister says 19 Australian personnel are involved in the Thailand cave rescue operation including a doctor who’s played an essential part in assessing which boys can leave and in what order.

Foreign Minister Julie Bishop told reporters in Australia that anesthetist and experienced cave diver Richard Harris is working with the Thai medical team inside the cave “to make the decisions about the order in which the boys were to be extracted.”

Crews will have to replenish air tanks along the route before rescuing the others.

Thailand’s interior minister says the same divers who took part in Sunday’s rescue of four boys trapped in a flooded cave will also conduct the next operation as they know the cave conditions and what to do. In comments released by the government, Interior Minister Anupong Paojinda said officials were meeting Monday morning about the next stage of the operation and how to extract the remaining nine people from the cave in the country’s north.

Anupong said divers need to place more air canisters along the underwater route to where the boys and their coach have been trapped since June 23. He said that process can take several hours. He said the boys rescued Sunday are strong and safe but need to undergo detailed medical checks.

Ex-U.S. Navy SEAL explains why so many divers are involved

Dave Sear, a former U.S. Navy SEAL, joined CBSN to explain why there are 90 divers involved in the rescue mission and what kind of assistance the U.S. can offer Thailand officials. Fifty of the rescuers are from Thailand and 40 others are from across the world. Sear said some of the divers are likely staging oxygen tanks and fixing lines of rope along the cave.

“A rope will go along the entire cave to guide them so they can find their way out of the cave. They will make sure it is in place. Then you are going to stage oxygen bottles or air bottles, depending on what they are using, along that route so that they can switch out as they go. They will have bottles there so they can refresh them, and put new bottles on. The other divers will get them out and replace them,” Sear said.

Sear said the U.S. will likely offer planning and logistic experience in terms of coordinating equipment needed for the mission.”We have some of the best divers in the world and, we can hook them up with internet, Skype, mobile stations and power sources,” he said.