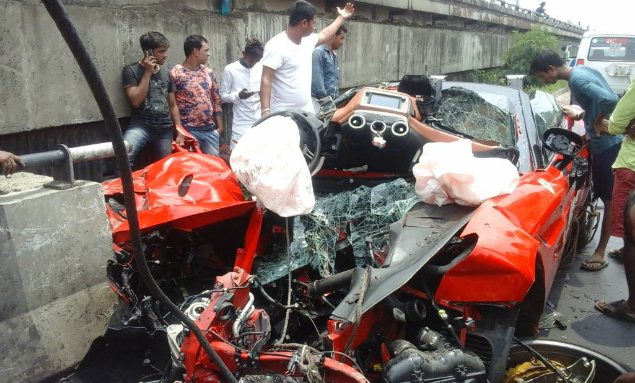 The accident took place around 9.30 am. Ferrari Convertible Crashed in Kolkata. The spot on NH 6. Pakuria area of Domjur – is about an hour’s drive from Kolkata.

One person was killed and a young woman critically injured when the Ferrari car they were traveling in crashed into a road divider on National Highway 6 around 30 km on Kolkata’s outskirts.

Police sources said the driver of the Ferrari, which was on way to Kolkata, seems to have lost control of the vehicle while apparently travelling at a high speed. The police said the exact details will be revealed only after forensic tests.

Pictures from the site indicate the huge impact. The car had hit the wall of an adjoining flyover, smashing the driver’s door, the entire front was reduced to a mass of mangled metal. A metal pipe, about 6 inches thick, can be seen piercing what is barely recognizable as the bonnet.

The injured woman has been admitted in a hospital in Kolkata. The police are yet to reveal the identity of the two.

According to hospital sources, the male occupant of the car was already dead when he was brought in. The woman, believed to be around 19 years old, is in a critical condition, with multiple fractures.

The Ferrari California T is a two-door, hard top convertible with over 500 BHP. To put those numbers into perspective, a Maruti Swift makes 86 bhp. The on-road price of the car is around 4.4 crore in Delhi.

In July 2017, a man in his 20s died in an accident near Noida Sector 135, involving a speeding Lamborghini. The driver of the Swift Dzire tried to overtake the speeding high-end vehicle, which abruptly swerved to its left hitting a Maruti Eeco car.

The Ferrari rammed the guardrails of the Pakuria flyover, and crashed into an iron rail of the bridge that pierced the engine and hit Shibaji on his chest even as the air bag was deployed. He died on the spot after an hour, waiting to be brought out of the car. He was pronounced dead at Calcutta Medical Research Institute in the afternoon.

Shibaji was part of a seven-car motorcade that had started from Kolkata on Sunday morning for a long drive along NH-6 and were returning home — after having coffee at a popular outlet at Gurap, off the highway — when the accident happened around 9.30am.

Seventeen-year-old Aashna Surana, daughter of Shibaji’s friend and another owner-driver of the motorcade, who was in the same car, was admitted to CMRI with serious injuries. Shibaji’s son, 17-year-old Shreyan, had a lucky escape; he was beside his dad till he decided to get out so that his friend, Aashna, could get a ride in the Ferrari.

Shibaji, his friends said, was alive for about an hour and kept on crying out for help. “Once, I heard him saying: ‘I can’t breathe’,” Parveen Agarwal, part of the group of friends, said. Cops, friends and locals finally had to prise the car open with the help of a crane to get Shibaji out in the absence of proper equipment to cut through the vehicle.

Police officials said they were working on leads to determine the sequence of events that led to the accident. “But no one remembers the truck’s licence plate number and we may have a problem tracing it in the absence of CCTVs in the vicinity,” said an officer of Domjur police station.

The group of seven motorists — part of the “Club GT” — left the city with their family members in seven cars; a Mercedes Benz S Class (SLC 43 AMG), a Lamborghini Gallardo, a Ferrari 488 Spider, a BMW i8, a Porsche Boxster, a Volkswagen Polo GTI and the Ferrari California T Shibaji was driving.

The impact was such that the Eeco car rolled over into the forested area killing the driver instantly.

The scion of a prominent sanitary ware chain in the city died an excruciatingly painful death inside a luxury car worth Rs 3.13 crore near Domjur in Howrah on NH-6, around 22km from the city, on Sunday morning while returning from a weekend ritual that involved taking friends and family on long drives in their high-end sports cars.

Forty-three-year-old Shibaji Roy, director of M. L. Roy & Co. Sanitations Pvt Ltd (one the oldest sanitation and drainage solutions company in Bengal), who was driving a Ferrari California T (WB 02 AL 0808) — belonging to a friend — allegedly took a sharp right after a truck in front suddenly slowed down, witnesses said.

“The Bear Woman”: The Brief, Sad Life Of Julia Pastrana