In a press meet, the CSIR-CMERI Durgapur director Prof. (Dr.) Harish Hirani, on July 17, said “Apart from the healthcare workers, the front-line security guards of any organisations are also very vulnerable to COVID through infected individuals any contaminated objects.”

Dr. Hirani further stated “CSIR-CMERI, Durgapur, aims to support and align the Starts-Ups and Entrepreneurs while developing its technologies to give boost to their aspirations and five them a platform to showcase their innovative potential. CSIR-CMERI is also focused upon developing products Made in India, which will consequently boost the Atma-Nirbhar-Bharat flagship initiative of the Government of India”

The CSIR-CMERI COPS is a conglomeration of the following technologies :

The Solar based IntelliMAST is an intelligent surveillance kiosk which identifies the body temperature and whether an individual is wearing Face Mask or not through customized Software Solution.

The IntelliMAST will help ensure safety of surprising staff and implementation of precautionary measures in any large organization.

The IntelliMAST will also facilitate identity Card Based Mask Dispensing & Attendance System. Facial Recognition based & ID Card based Attendance System will be incorporated into the system in the near future and there fore may act as comprehensive solution of office and industrial complexes as well as School and College Campuses.

The Touchless Faucet (TouF) is being launched for households and office spaces. The system dispenses Liquid Soap and Water from the same Faucet with a time gap of 30 seconds which is as per the latest Givernment guidelines. The Faucet can be very easily mounted on top of any Wash Basin and will be available in plug and play mode for very easy installation.

The System dispenses Water 30 seconds after dispensing Soap in a Touch Free Mechanism as per local government guidelines. The domestic variant of the dispensing system will help in arresting the contamination and gelp in further containing the spread of infection among the family members.

The CSIR-CMERI developed 360° Car Flusher is a Sodium Hypochlorite Water Screen which uses specialised Nozzle design to ensure that the Sanitizer Diffused Water is evenly spread over and under car body/ Wheels with adequate Water force and coverage.

The Architecture of the 360° Car Flusher is based upon a Water Channel Frame with appropriate number of specialised Nozzles which can be customised and modified as per the specific requirements of any particular organisations. The water channel frame and nozzle design of the 360° flusher have been optimized to ensure Water Efficiency and reduce water wastage. Ut require 750 watts of power required to run a pump. 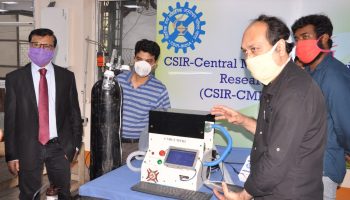 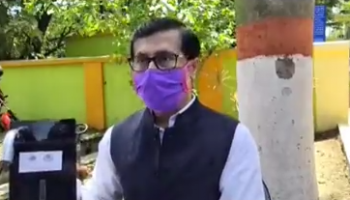