West Bengal and Haryana MSMEs pitch in with OEU

Kolkata: The Central Mechanical Engineering Research Institute (CMERI), a constituent laboratory of the Indian Council of Scientific and Industrial Research (CSIR), has transferred its indigenously developed technology of Oxygen Enrichment Unit (OEU) to three entrepreneurs in its efforts to empower and strengthen the MSMEs through a virtual meeting on Friday.

He further added “This is often misunderstood that SPO2 (Oxygen saturation of blood) above 90 can only be achieved in the ailing patients with Oxygen % (FiO2) more than 90. Many times a moderate amount of supplemental oxygen FiO2 in the range of 0.3 to 0.4 with appropriate flow rate (under medical supervision) may provide SPO2 level > 90.”

He also stressed upon the need for use of proper masks by the patients to avoid the infections amongst their family members.

Prof. Hirani further said that the motto of the Institute is to share the technology to the entrepreneurs who have the manufacturing capabilities and capacity to source the required raw materials of the product so that the mass production of the OEU may be started at the earliest for its reach to the common people.

This will also boost the skill development and employability of a large number of beneficiaries.

He also assured the licensees for handholding and guidance in sourcing of the raw materials, the technical detailing or any other related support from the Institute for manufacturing the OEUs.

Mr.Dev P. Goel, MD and Mr. Bharat Goel, CEO of M/s Conquerent Control Systems Private Limited, IMT Manesar, Gurgaon a company under Madhu Group said that their company has all the manufacturing capability related to fabrication, finance and resources to start the production of the OEU immediately.

They further stated that their primary motto at the moment is service to the humanity considering the prospective 3rd wave and would try to keep the price of the product to the minimum. They have also  planned for providing the product to the hospitals, clinics, schools & colleges, factories for workers and the societies of the real estates for maximizing the benefits of the technology. They were also concerned over the influx of spurious products from abroad lacking the trust of the people, but were very hopeful that with CSIR-CMERI’s technology and their brand value an indigenous and candid product would be available to the masses.

Mr.Sushim Mukul Bhol, Director, M/s A B Elasto Products Private Limited, Krishnapur, Kolkata shared the profile of his company which is basically involved in the rubber based auto engineering products like Air Brakes, Hose etc. has excellent infrastructural facility and distribution system to start manufacturing the OEUs.

Mr. Bhol said that within a month’s time he would make the prototype and would initially start with 10 numbers of OEUs per day which would be scaled up as per the requirement. He said that compressor is not a problem for them and they would get some zeolite from the local sources.

Mr. Gouranga MItra, Prop, M/s Automation Engineers, P.S. Hare Street, Kolkata shared that his company is presently engaged making engineering tools which are exported to different countries. Now he is diversifying his product line to the medical equipment  also as his company has all the infrastructural facilities for manufacturing the OEUs. They would also manufacture zeolite sieves and make the prototype within 15 days and planning to start production of 500 units per month initially.

Mr. Mitra also hoped that with the add on features and support from CSIR-CMERI on the technology, they would be able to export the product from the country very shortly. 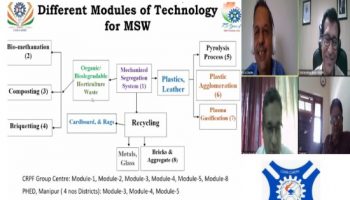 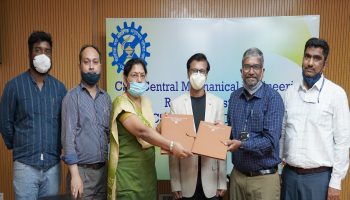 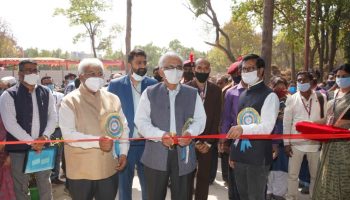 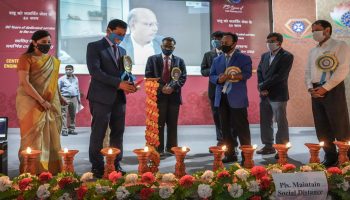