New Delhi : AIMIM chief Asaduddin Owaisi attacked Prime Minister Narendra Modi and alleged he does not want Muslim community to grow. On a Press brief ahead of Parliament house , Owaisi said “PM Modi does not want Muslims to join the mainstream. Out of 300 MPs of the BJP , not even one is from the Muslim Community” .

All India Majlis-e-Ittehadul (AIMIM) head Asaduddin Awaisi said that “PM remembers Shah Bano. Didn’t he remember Tabrez Ansari, Akhlaq ,Pehlu Khan ? Didn’t he remember that his minsiter has garlanded the murder of Alimuddin Ansari ? If someone is making the ‘gutter’ comment, so why do you not give Muslims Reservation ? ”

He Added ” No Muslims MP from your party comes . Who is keeping them behind ? You. There’s a difference between their words and ideology. PV Narasimha Rao was responsible for Babri Masjid demolition, despite being PM he couldn’t do anything. Now there’s PM Modi who wants to work on his ideology. ” 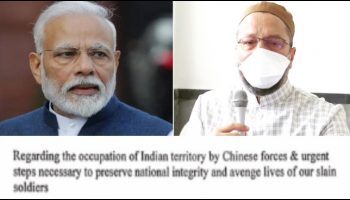