Visakhapatnam : At least 10 persons including a child died after toxic gas leak at LG polymers plant located near Vizag city , Andhra Pradesh. At least 1000 people were reportedly admitted to hospital. Thousands of people were evacuated from nearby villages .

The local villagers informed the officials around 3.30 am today about the presence of gas in the air. “Hundreds of people have inhaled it and either fell unconscious or having breathing issues,” Srijana Gummalla, Commissioner, Greater Visakhapatnam Municipal Corporation said on Twitter.

The plant operated by LG Polymers was located in the outskirts of Visakhapatnam. The city and the surrounding area were home to around five million people. The plant was shut since late March due to coronavirus lockdown

“We are currently assessing the extent of the damage on residents in the town and are taking all necessary measures to protect residents and employees in collaboration with related organizations,” LG Chem, the owner of LG Polymers, said in a statement.

Spoke to officials of MHA and NDMA regarding the situation in Visakhapatnam, which is being monitored closely.

I pray for everyone’s safety and well-being in Visakhapatnam.

I’m shocked to hear about the
#VizagGasLeak . I urge our Congress workers & leaders in the area to provide all necessary support & assistance to those affected. My condolences to the families of those who have perished. I pray that those hospitalised make a speedy recovery.

The Andhra Pradesh government on Thursday appealed to people of Visakhapatnam not to panic and cooperate with authorities working to bring under control the situation following a gas leak from a chemical plant there.

Reports of a second leak at #LGPolymers premises are false. Maintenance team was repairing the system and some vapour was let out. There is NO second leak.

After a second leak rumor , Vizag police tweeted “Reports of a second leak at LG Polymers premises are false . Maintenance team was repairing the system and some vapoue was let out. There is no second leak.”

#LGPolymers#Vishakhapatnam : Over 1,000 people fell sick after an alleged gas leak at a #LGPolymers chemical plant .

If You Know what happened after #BhopalGasTragedy in 1984 you'll definitely feel fear after hearing the gas leak in visakhapatnam.!

God help us all.!? pic.twitter.com/Hrl9zKChkJ

Commom man from vizag explains about the incident#VizagGasLeak #Visakhapatnam pic.twitter.com/MAa3AKt44K

Chief Minister YS Jagan Mohan Reddy enquired about the gas leak incident and directed the district officials to take every possible step to save lives and bring the situation under control. He will visit the hospital where the affected are being treated. The Chief Minister is closely monitoring the situation.

The police and fire and emergency services have started evacuating a 5-km radius area. Vizag Collector V Vinay Chand said: “The situation is being monitored with NDRF and SDRF officials at work. We are doing everything possible.” 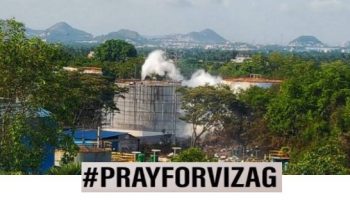 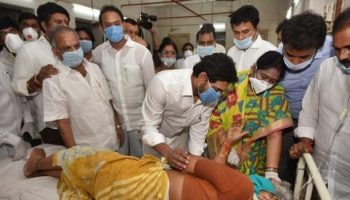