Officials have closed of Highway 132, after lava spilled into a stretch of road from Lava Tree State Park to Four Corners, causing thousands of locals evacuated their homes.

He said: “It just came over and ate the farm, boiled the water out of the ponds.”

As Kilauea’s fissures continue to erupt bursts of lava, several thin strands of hairs are produced and easily picked up by gushing winds, blowing downwind and to the west of the fissure.

But locals have been warned, as the molten basaltic glass can severely hurt eyes and lungs when inhaled.

This is the latest hazard arising from the Big Island’s volcano eruptions, as raging lava and plumes of toxic sulphur dioxide gas continue to threaten residents in Pahoa.

Earlier on Tuesday, 4,600 metres of ash exploded out of Kilauea ‘s summit, leaving hundreds of locals scrambling out of the area as officials issued a massive evacuation.

US Geological Survey warned that ash drifting northwest will largely affect anyone situated near the volcano’s summit, in one of the world’s most active volcano eruptions in 100 years.

One raging fountain of lava burst more than 200 feet (60 metres) in the air on Monday, the agency reported.

Hawaii’s Big Island volcano has entered its fourth week of raging activity, as fast-flowing lava from multiple fissures have blocked roads and damages dozens of buildings since its eruption on May 3.

At least 83 homes have been destroyed and 2,000 people evacuated as the volcano continues to rage on.

Plans have been announced to deploy a rescue helicopter to evacuate a further 1 000 residents in a coastal area south of the fissures, County of Hawaii officials said.

Where is the lava flow now? Latest thermal map

Lava fountains as high as 200 feet are continuing to pour out of active fissures on Big Island, adding to flows drifting southwards towards the sea.

Kilauea erupted again on Tuesday sending an ash plume 15,000 feet into the sky.

The latest thermal USGS maps below show how active fissures have widened the impact areas in recent days south of Highway 32.

The scientific agency also showed in a separate map how the flow channel south has differed to previous lava flows caused by eruptions between 1840 and 2014-2015.

As a result of the spreading lava, only Beach Road remains a viable access route into Lower Puna.

Is the power plant still under threat?

Residents say they are alarmed about the lava flow at the 38-megawatt Puna Geothermal Venture electrical plant, which powers a quarter of Big Islands’ electricity.

Two wells that tap into steam and gas deep below ground have been penetrated, with the threat of more being submerged.

The Israeli-controlled operator Ormat Technologies Inc said it had not assessed the damage yet.

Officials had feared uncontrolled levels of life-threatening hydrogen sulphide would be released into the atmosphere but this has yet to happen.

However, lava has never engulfed a geothermal plant anywhere else in the world prior to current events in Hawaii so what happens next is largely unknown.

USGS scientists have warned Kilauea is likely to become more explosive in the next few weeks as the water level drops at the volcano’s summit.

County Civil Defense urged residents to evacuate to avoid being caught in rivers of molten lava violently propelling out of fissures on the eastern side of the island.

The volcano has so far forced over 2,000 people to leave the area and over 20 fissures have been created by the volcano.

“One of the fountains was going up to 60 yards high.

Frequent explosive eruptions at the summit of Kilauea have continued to plague Hawaii residents.

How far is lava from Kona? Is air quality affected?

A Hawaii County Civil Defense Agency statement said: “You are at risk of being isolated due to possible lava inundation of Beach Road near Four Corners. “At the present rate of flow, it is possible that Beach Road near Four Corners may be blocked within 4 to 6 hours.”

Officials are particularly worried about sharp, thin strands of volcanic glass fibres flying through the air into people’s eyes or their lungs.

Known as laze – a blend of lava and haze – the fragments are formed from an acidic steam cloud as lava hits the sea.

But visitors to the Kona district on the island’s west coast are being told not to worry.

Air quality is deemed good across most of Big Island at the current time and there is no risk of sulphur dioxide being carried that far.

Even when the winds in the south-east side of the island have moved direction, they are moving “out to sea away from the Hawaiian Islands”, according to the most recent statement from Hawaii Tourism Authority.

Hawaii State Department of Health Director Dr. Virginia Pressler reiterated in the same update on May 25 that tourists were safe to visit Kona and other areas of Big Island.

She said: “The air quality for the vast majority of the Hawaiian Islands is clean and healthy.

“The emissions from Kīlauea volcano are a non-factor for O‘ahu, Maui, Moloka‘i, Lāna‘i and Kaua‘i.

“The weather is beautiful and warm with cooling trade winds everywhere in Hawai‘i and is exactly what travelers expect when coming here for a relaxing and fun vacation experience.

“This includes Hilo, Pāhoa and the Kona and Kohala coasts on the island of Hawaii.”

There have been no updates since then to suggest these areas are unsafe to travel to.

Locals just hours from being stranded as lava speeds into village

Residents in the Leilani area are being ordered to leave their homes immediately as the lava spreads down Highway 132.

Shelters have been set up at community centres and churches in the area.

A second update at 1.30am local time (12.30pm BST) extended the evacuation notice to the Kapoho area including Kapoho Beach Lots and Vacationland.

The evacuation orders came as Kilauea entered its fourth week of simultaneous eruptions at its summit crater and along a six-mile string of fissures 25 miles down its easterm side.

A spokesman for the US Geological Survey said: “A fast-moving lava flow is travelling down highway 132 and is currently near the intersection of Noni Farms road.

“It advanced 800 yards over 80 minutes. The flow is fed by continued strong fountaining from Fissure 8.

Contingency plans have been made for a possible helicopter evacuation of up to 1,000 residents in a coastal area south of the fissures should their last exit route, State Highway 130, become blocked by lava or become unsafe due to gaping cracks.

At least 82 homes have been destroyed in the southeastern corner of Big Island and about 2,000 people have been ordered evacuated since Kilauea began erupting on May 3.

Officials have warned that sharp, thin strands of volcanic glass fibres being carried on the wind could injure eyes and lungs.

The fibres are known as “Pele’s hair” after the Hawaiian goddess of volcanoes and are formed through the stretching of molten basaltic glass from lava, usually from lava fountains, lava cascades and vigorous lava flows.

Pele’s hair is extremely light, so the wind often carries the fibers high into the air and to places several miles away from the volcano.

A spokesman said: “Avoid touching it or getting it in your eyes.

“It can cause injury to eyes and lungs if breathed in.”

Danger from the volcano has now reached Guam some 4,000 miles across the Pacific Ocean.

Volcanic haze from Kilauea has stretched across the Pacific and threatens residents of the Mariana Islands.

“Mariners and pilots should be aware of lower visibilities caused by this haze.”

MARSHMALLOWS should not be roasted over the volcanic eruption on Hawaii’s Big Island the United States’ Geological Survey (USGS) has warned residents after being asked the unusual question in a social media exchange.

According to USGS, toasting the sweets over the red hot lava of Kilauea would give a “pretty spectacular reaction”, but would taste “bad”.

The official body were responding to the mad question sent to them on Twitter.

Jay Furr from Richmond, Vermont, had asked whether it would be possible to roast marshmallows over the burning lava with a “long stick”

“Assuming you had a long enough stick, that is?

“Or would the resulting marshmallows be poisonous?”

The USGS were fairly straightforward in their answers and told Mr Furr “that’s not safe,” but they also gave a fascinating insight into what may happen if he had tried to toast his sweets.

They responded: “Erm, we’re going to have to say no, that’s not safe.

“If the vent is emitting a lot of SO2 or H2S, they would taste bad.

“And if you add sulphuric acid (in vog, for example) to sugar, you get a pretty spectacular reaction.”

At the point when sugar is joined with sulphuric corrosive, it makes a thick, dark carbon item, and in addition water vapor and sulfur dioxide.

But, it would not be the only chemical reaction from the eruption so far.

Hydrochloric acid has been created as Kilauea’s lava has reached the sea.

The lava haze – or laze – is highly toxic, and is laced with tiny fragments of volcanic glass, as well as the acid, and can cause damage to victims’ breathing or eyesight.

Kilauea has been erupting since May 3, and has so far destroyed more than 80 homes on Hawaii’s Big Island.

Only one person has been seriously injured so far, when a man’s leg was shattered when it was hit by a flying molten rock. 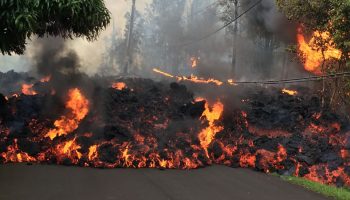 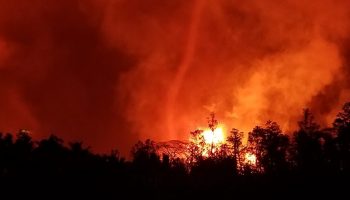