Current magma streams are most blazing, quickest of most recent Hawaii well of lava ejection

The hottest and fastest-moving lava of Kilauea volcano’s latest eruption spread across new parts of the Big Island Wednesday, forcing officials to order evacuations in two coastal neighborhoods over fears that the rapidly advancing flows could cut off dwindling escape routes.

Overnight, the lava was moving fast enough to cover about six football fields an hour, according to U.S. Geological Survey scientist Wendy Stovall.

“Hawaii County Civil Defence decided to evacuate all of lower Puna to ensure that people would be able to get out,” Stovall said.

Lava gushed across and then along a roadway that leads from the commercial center of Pahoa toward smaller towns and rural farmlands to the east.

About two dozen recent fissures in that area have created towering lava fountains and bone-rattling explosions throughout the eruption. The lava that is currently coming to the surface is the hottest and most fluid to date.

“This is the hottest lava that we’ve seen in this eruption, even just a matter of 50 degrees centigrade makes a big difference in how quickly lava flows can move and how they behave once the magma exits the vent,” Stovall said.

In fact, the current lava eruptions in Puna are as hot as Hawaii’s lava will ever get. “It can’t get hotter than where we are,” Stovall added. “We are pretty much-tapping mantle temperatures right now.”

The volcano has been erupting violently

One fissure was observed early Wednesday morning spouting lava over 61 meters into the air.

Hawaii County officials said lava destroyed the electric utility’s equipment on the highway, which knocked out power to Vacationland and Kapoho Beach Lots.

“You are at risk of being isolated due to possible lava inundation,” the Hawaii County Civil Defence agency advised the public.

There were several small earthquakes at Kilauea’s summit Wednesday, where the vent inside the volcano’s Halemaumau Crater has grown along with a series of explosive eruptions that have sent rock and ash thousands of feet into the sky.

The U.S. Geological Survey released drone footage Wednesday of another fast-moving lava flow that trapped a man in Leilani Estates over the weekend. As lava rushed past the property, a USGS crew that was flying the drone used the aircraft to lead rescue teams to the stranded person. The person was safely evacuated.

A man was arrested in Leilani Estates after police say he fired a gun and assaulted another man after demanding that the man and his friends leave the area Tuesday.

Hawaii Volcanoes National Park remains closed because of the volcanic activity at the summit and the ongoing eruptions on Kilauea’s eastern flanks. Park officials said that crews are working on clearing another roadway on the south side of the park that was covered by lava from previous eruptions. They hope the roadway will provide an alternative escape route if lava cuts off more roads to the north.

Strands of volcanic glass called as Pele’s hair was accumulating on the ground in Leilani Estates and surrounding neighborhoods, and winds may blow lighter particles farther away, scientists said. The strands can cause irritation and respiratory problems when it comes in contact with people.

Pele, known as the goddess of volcanoes and fire, is an important figure in Hawaiian culture.

Volcanic gas emissions remain high from the eruption. Wind conditions for Wednesday were forecast to result in widespread vog – or volcanic smog- over the Big Island.

HISTORY: To what extent has Kilauea been ejecting?

Hawaii spring of gushing lava Kilauea is as yet emitting just about a month after in excess of 250 tremors smashed the hole floor, regurgitating magma and lethal gas over the state.

Kilauea is Hawaii’s most active volcano, but the question is, how long has it been erupting for?

The volcano has been active for more than 35 years, with the volcano continuously erupting since 1983 – however, the recent eruptions have been explosive.

Kilauea has erupted like this on two previous occasions, in 1924, when one man died after 10-tonne rocks were hurled into the air, and in 1983, when the Pu’u O’o vent collapsed, sending lava 1,500 feet into the air.

Large explosions along the East Rift Zone are rare, but recent earthquakes dislodged much of the ground near the area causing massive amounts of damage.

Asta Miklius, a geophysicist from the USGS Hawaiian Volcano Observatory, said there is no way to know exactly how long the eruption will continue.

“One of the parameters is going to be whether the summit magma reservoir starts to drain in response to this event, and that has not happened yet,” Mr Miklius said.

“There is quite a bit of magma in the system. It won’t be just an hours-long eruption probably… so we are watching that very, very closely.”

Kilauea finally erupted explosively in 2018 after more than 250 earthquakes struck the region in a 24-hour period on April 30.

Earthquakes continued to rock the area, dislodging the crater floor and forcing lava to explode out through several fissures in the Leilani Estates and Lanipuna Gardens subdivision.

Some of the earthquakes measured more than 5 magnitude, destroying the inside of the volcano to cause a massive eruption.

Since then, more than 80 houses have been destroyed by lava flows, with more than 10,000 people displaced by the volcanic activity.

The volcano has continued to violently erupt over the last month, spewing toxic fumes, lava flows and giant plumes of volcanic ash thousands of feet into the air.

On May 21, two lava rivers from several fissures breached the Pacific Ocean on the south coast, creating a thick laze of hydrochloric acid, which can be fatal to humans.

Lava continues to burst out of the ground in Puna, with the Hawaii Civil Defense Agency warning Hawaiian residents to be prepared to evacuate should the volcano erupt more violently in the coming days.

Hawaii’s Kilauea volcano continues to erupt this week, as lava oozes out of 23 fissures in Puna forcing thousands to flee their homes.

The Hawaii volcano’s lava flow has destroyed more than 80 properties so far, with United States Geological Survey (USGS) scientists still unable to determine when the eruptions might stop.

Hordes of residents have evacuated the region, particularly in the Leilani Estates where the lava has taken over more than half the area.

The volcano has remained one of the most active on Big Island. 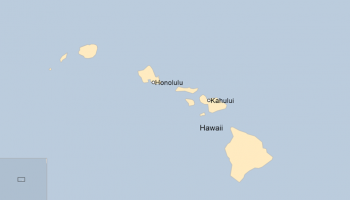 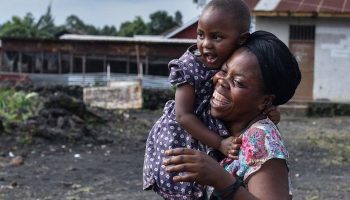 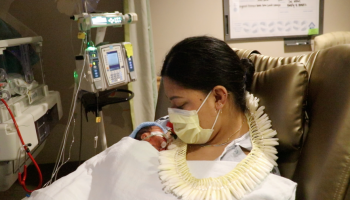 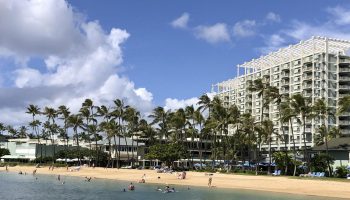 Sailor who shot, killed himself at Hawaii resort identified