She launched a line of chic handbags in the early 1990s that became a global sensation. Iconic fashion designer Kate Spade was found dead Tuesday in her New York City apartment of an apparent suicide. She was 55.

Det. Sophia Mason, a spokeswoman for the NYPD, confirmed to USA TODAY that Spade was found dead of an apparent hanging at a Park Avenue address around 10:30 a.m. ET Tuesday. She said detectives are still on the scene.  Spade was found by housekeeping. Her husband and business partner Andy Spade were in the house at the time, according to the Associated Press. Law enforcement officials told the Associated Press that it was an apparent suicide and that housekeeping staff found Spade hanging in the apartment at around 10:20 a.m. She left a note and her husband was at the scene, police confirmed to The Washington Post.

Police added that the investigation is ongoing and had no further comment. A representative for Spade said she did not have a statement at this time.

The Associated Press and CBS New York reported that a suicide note was found at Spade’s apartment but police did not immediately confirm that.

Spade is survived by her 13-year-old daughter, Frances Beatrix Spade. Kate Spade’s new fashion line, Frances Valentine, is named for her daughter. According to Moneyish, she launched it a year ago but its website was down Tuesday afternoon.

Friends and admirers expressed shock and sadness at the news.

Spade was a two-time winner, in 1998 and 1996, of a CFDA International Award, considered the equivalent of an Oscar for the fashion world.

Spade became synonymous with the popular fashion brand that bore her name. Together with soon-to-be-husband Andy, Spade founded the Kate Spade label in 1993 as a collection of handbags and accessories. It eventually became known for its bold color palette and functional products, including stationery, beauty products, and eyewear.

The first Kate Spade shop in New York opened in 1996. Three years later, the couple sold Kate Spade to Neiman Marcus, which then sold it to Liz Claiborne in 2007. Both founders eventually left the brand, which is now a part of Tapestry, Inc. There are more than 140 Kate Spade retail and outlet stores in the United States and more than 175 internationally. “The CFDA is devastated to hear the news of our friend, colleague, and CFDA member Kate Spade’s tragic passing. She was a great talent who had an immeasurable impact on American fashion and the way the world viewed American accessories.

Born Katherine Brosnahan in Kansas City, Mo., Spade studied journalism at Arizona State University and landed a job at Conde Nast in New York City. She started as an assistant at the fashion publishing giant, where she eventually worked her way up to senior fashion editor at Mademoiselle, dealing with accessories for fashion shoots.

At the time, “bags were too complicated,” Spade later recalled to NPR. “And I really loved very simple kind of architectural shapes. And I would wear these very simple shapes, none of which were famous designers. I mean, there were no names. If someone were to say, whose is that? I’d say, I don’t know, I bought it at a vintage store or it’s a straw bag I got in Mexico.

“They were all very square and simple,” Spade said. “And I thought, gosh, I mean, why can’t we find something just clean and simple and modern?”

She would soon quit her magazine job to join with Andy Spade in co-founding the fashion label, which combined both of their names. (She was still Kate Brosnahan at the time.)

“We want to honor her life and her major contribution to the fashion business and express our most sincere condolences to the family,” the statement said. Spade became a fashion force and cultural touchstone for her instantly-recognizable bags featuring modern, sleek looks with bold pops of color and feminine touches. Along with her husband, she grew a small line founded in 1993 to an international behemoth bearing her name.

Spade was born Katherine Noel Brosnahan in Kansas City, Missouri, in 1962. She met Andy Spade at Arizona State University in the ’80s when they were both students working part-time at Carter’s men’s store.

In 2016, after she left her brand, Spade changed her name to Kate Valentine Spade and launched a luxury handbag and footwear brand called Frances Valentine. She told Women’s Wear Daily that year, “Frances is a longtime family name on my dad’s side. My grandfather, father, brother and my daughter’s name is Frances. And then Valentine was my mom’s dad’s middle name because he was born on Valentine’s Day.”

Spade is survived by her husband and daughter.

After graduation, Spade moved to New York, starting her career at Mademoiselle magazine as an accessories editor.

“She stopped in New York for one night on a trip back from Europe,” Andy told USA TODAY in a 1997 interview, “and went to Mademoiselle for a temp job and was hired.”

It was there she saw a need for practical yet fashionable handbags. Along with her husband and mutual friend Elyce Arons, Spade launched the company with an iconic $155 black nylon handbag and five other basics, mostly square-shaped and minus froufrou decoration.

Distinguished by the discreet rectangular label outside each bag, the line found a niche as a quintessentially preppy line: functional classics in occasionally offbeat colors designed never to succumb to trendiness.

They quickly became popular with celebrities from Sandra Bullock to Linda Evangelista.

“Back then people weren’t doing simple designs. There was a PBS tote bag that had style, but it wasn’t made well,” she told USA TODAY in 1997.

Andy said in an interview with Business of Fashion in 2016 about working with his wife: “It’s a true team. Kate never wanted to be in the front. [At Kate Spade] you ended up being the one on the front lines all the time, which you didn’t really want to do. … Kate knows what she wants to wear and she really focuses on her taste and style. I bring in the more conceptual ideas.”

Paola Venturi joined the trio as design director when the company began to make shoes in 2001. All walked away from the company in 2007, one year after it was acquired by the group then known as Liz Claiborne Inc. for $125 million. The group subsequently sold off its other operations and became Kate Spade & Co. Kate Spade New York now has over 140 retail shops and outlet stores across the U.S. and more than 175 shops internationally.

Julia Curry, a spokeswoman for the company, said that “Kate will be dearly missed” and “our thoughts are with Andy and the entire Spade family at this time.”

Celebrities took to Twitter to mourn the passing of fashion designer Kate Spade, who was discovered Tuesday in her New York City apartment dead of an apparent hanging at age 55.

Spade’s namesake brand, which she walked away from in 2007, tweeted “We honor all the beauty she

In a Twitter tribute, Lena Dunham praised Spade as “more than a designer.”

“She had a quirky visual language that captivated Bat Mitzvah girls and artists alike. She was also a staple of NYC who spread good will,” posted Dunham. “My heart breaks for her family. Thank you, Kate, from one of the millions you made feel beautiful.”

Kate Spade was more than a designer. She had a quirky visual language that captivated Bat Mitzvah girls and artists alike. She was also a staple of NYC who spread good will. My heart breaks for her family. Thank you, Kate, from one of the millions you made feel beautiful. @DavidSpade – all my love to u dave –

“I believed that I could, so I did”. She alone didn’t change the handbag world but she was an inspiring accessory. #KateSpade#RIP

Kate Spade’s tragic passing is a painful reminder that we never truly know another’s pain or the burden they carry. If you are struggling with depression and contemplating suicide, please, please seek help. https://t.co/eruSexNoGj Former first daughter Chelsea Clinton recalled getting her first Kate Spade purse in college. “I still have it,” Clinton wrote. “Holding Kate’s family, friends and loved ones in my heart.”

My grandmother gave me my first Kate Spade bag when I was in college. I still have it. Holding Kate’s family, friends and loved ones in my heart.

Bette Midler’s heart went out to those that Spade touched. “My deepest sympathy to her family and friends, and her many fans around the world, who loved the wonderful illusions she created,” she shared.

#KateSpade, whose lively, colorful, and yes, joyous designs has died. My deepest sympathy to her family and friends, and her many fans around the world, who loved the wonderful illusions she created. I am stunned. I loved @katespadeny’s beautiful and whimsical fashions. So sad. Prayers to her family.

So so sorry to hear about @katespadeny … a true trendsetter … may you Rest In Peace …..? Maria Shriver issued a call for followers to “Be kind to people today, even those you think have it all.”

Me heart goes out to Kate Spade's family. May we all take note that we never know what goes on in someone’s life. Be kind to people today, even those you think have it all. https://t.co/1SFbSRfQK6 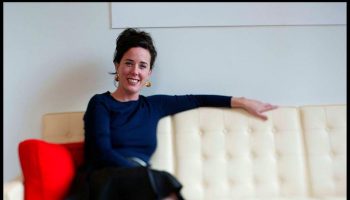