Love Island’s first challenge was clear enough: Keep away from the creepy doctor Innocence ended on the thirteen minute mark. To be fair to barmaid and soon to be professional celebrity daughter Dani Dyer, she was given a limited range of options to pick from (a reality with which she is about to become over-familiar).

“Are you here for love or lust?” she was asked by host Caroline Flack, in what may also have been the first point at which the viewer was indulged with any meaningful sight of either the front or top halves of Love Island’s five, female enthusiasti

cally bikini’d contestants, whose characters by this point had not been permitted to develop much beyond the ambulant backside stage.

Though this will doubtless prove no obstacle to national sweetheartdom, Dann told barefaced lies with almost her very first words. For Dani, we learned, is “here for love.”

So Dani is not here, definitely not, for paid for instagram endorsements and a five figure deal with Dancing on Ice.

It was a further ten minutes after that until Love Island was truly back on our screens in awful, wretched earnest. That moment came when Alex the A&E doctor walked in and the now time honoured formula of fleshy lab rat experiment in psycho-sexual cruelty came roaring back with that familiar sense of fear and joy and shame and loathing.

Let’s be clear. It’s Alex’s fault. Alex is an A&E doctor. Alex has a proper job, a middle class accent and an un-chiselled abdomen that screams ‘all this is beneath me’, which for the avoidance of doubt, it isn’t.

“Step forward if you fancy Alex,” was the instruction given by presenter Caroline Flack to the five women, so quite why all five of them evidently heard the words as “Start digging and don’t stop til you see the Sydney Opera House” is a mystery presumably to be solved in later episodes.

As Alex was moved to the “subs bench”, to watch the traditional parade of male models and semi-anthropomorphised eight packs go wild at the very pick and mix from which he had just forcibly ejected, one can only imagine the past horrors whirring behind his eyes that he would rather be living right now. Freak accidents with industrial machinery, high speed dashes through plate glass doors, that kind of thing.

By tragic process of elimination, it was “musical theatre performer” Samira who was compelled to “couple up” with the not-so good doctor. And if you’re looking for a reason why “musical theatre performer” Samira’s acting career has thus far not propelled her further than heavily implied contractual obligation to have night vision enhanced sex on ITV2, then it showed.

It’s not like Alex won’t have seen that kind of mask of undisguised horror before, though traditionally he has a horrifically misshapen X-ray to hand.

Still, Samira’s already done her bit in the name of public service, and that was this line of questioning, in which the lack of punctuation is definitely the model’s own. “So you work in A&E then, that’s pretty intense how long have you been single?” As always with Love Island, the profundity is left unsaid and it was very clearly this: Absolutely no one is interested in your job mate. Keep it to yourself.

It was also Samira who, barely a few hours after screaming “Welcome to the summer of our lives” would be trying not to wince as the man she was all but forced to be sharing a bed with would be doing his best to sneak in some sort of corrective gumshield as the lights went out.

With her very first words on the show, by the way, Samira had confessed she was “so nervous I’ve barely slept last night.”  If Love Island is going to change her life, in this respect it certainly hasn’t yet.

Elsewhere, some models decided they fancied some other models, whose names we will remember later and forget shortly after that. A shoe shop manager boasted about the size of her in-store discount, but a man called Jack who claims to sell pens for a living was not brave enough to admit his career in stationary had been chosen solely for access to cheap Tippex for use on his own teeth.

Still, Cupid’s arrows have been fired. Eleven of them, simultaneously, at high speed, into a tiny circle from point blank range, and one thing’s abundantly clear: absolutely no one’s wearing much in the way of body armour.

Now we step back and watch the low rent Tarantino style bloodbath unfold. 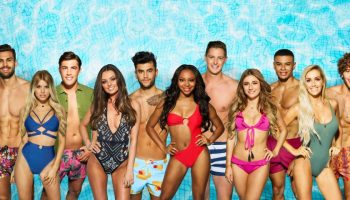