Putin says Russia has pulled back 1,140 military staff and 13 warplanes from Syria

In the past year, Drake has gifted the world new music in the form of a “playlist” (More Life) and a two-song EP (Scary Hours). But soon enough, the 6 God will unleash his first full-length project since 2016’s Views titled Scorpion, and the excitement is palpable.

The Scorpion announcement follows Drake’s instant hit and current Hot 100 chart-topper “Nice for What,” the follow-up to Scary Hours cuts “Diplomatic Immunity” and “God’s Plan” — the latter of which held the No. 1 spot on the Hot 100 for 11 weeks and broke Apple Music and Spotify’s first-day streaming records in January.

Ahead of the release of Drake’s hugely anticipated Scorpion album, we’ve gathered everything you need to know to get excited about the record’s drop.

Just because he’s been trolling us with his adidas and Nike ‘fit switch-ups, and playing Fortnite on the regular, doesn’t mean Drake has not been hard at work in the studio.

His last album Views, which dropped in 2016, included guest appearances from Wizkid, Kayla, and Rihanna. The record was then followed by the mixtape More Life in 2017 and the Scary Hours EP a year later. Needless to say, we’re well on track for another full-length.

Given that Aubrey has taken to social media to announce that he has a new albumdropping this summer, we’ve gathered everything we know so far about Drake’s forthcoming record.

Drake began to tease fans with tidbits about his album earlier this week when he posted a photo of himself in a shiny bomber jacket with “Scorpion” emblazoned on the back. With his new album slated for release in June, Billboard scoured the internet and Drizzy’s Instagram page to find out more about his fifth studio album Scorpion. Here’s what we know so far:

The title of Drake’s new album Scorpion led many to believe it was a reference to the rapper’s Scorpio zodiac sign, which makes sense given that his birthday falls on October 24 and the rapper’s entire music empire, October’s Very Own, is named after his birth month.

Earlier in the week, Drake shared a photo of a gold necklace, embellished with a diamond-encrusted scorpion in the middle and the succinct caption, “June 2018″ announcing his new project. He followed up with another photo of himself rocking a black bomber with writing on the back, reminiscent of an end-credits scene in a movie. Could Drizzy be filming a documentary or short film to coincide with the album?

While Drake announced that his forthcoming album will arrive in June 2018, he decided to keep the specific release date a secret. However, he’s set to perform at a super exclusive dinner party at Chateau Le Jardin in Ontario on June 7, which may or may not be a part of his album’s promotional campaign.

It is with great pleasure and excitement to announce that Drake will be performing at Chateau Le Jardin on June 7th for Après Noir! ✨✨ @apresnoir presents the opportunity to witness Drake perform in a room of only 1000 people, complimented by a dinner curated by @giadadelaurentiis and an opening performance by @jessiereyez ✨ The globe’s transcendent hip-hop superstar @champagnepapi takes the stage at the opening edition of Après Noir on June 7th. Channeling his energy toward championing Canada wherever he treads, the singer, songwriter, record producer, actor, and entrepreneur is set to greet concert-goers in an intimate and exclusive setting. www.apresnoir.com VERY LIMITED TICKETS AVAILABLE. Inquire Now

Drake’s “God’s Plan” and “Diplomatic Immunity” were already featured on the Scary Hours EP released earlier this year, so it’s likely the singles won’t land on Scorpion, but that doesn’t mean Drizzy’s go-to producers — Boi 1da and Noah “40” Shebib, who produced the Scary Hours cuts — won’t have a hand in the new album. In fact, Drake already confirmed his longtime producer 40 and OVO manager Olivier El-Khatib will be executive producing the Scorpion album in a recent Instagram post, in which 40 is seen rocking his own custom Scorpion bomber jacket.

The 6 God’s latest song “Nice for What” was produced by Murda Beatz and could possibly be featured on the new project as well. In December, Drizzy posted an image of him speaking with Nigerian artist Tekno at a studio, suggesting the two artists may have collaborated on a song, given Drake’s history with Caribbean-inspired sounds.

Before announcing the album, though, Drake’s friend, Steez (aka @steezthegreat on IG) complimented the outfit the rapper was wearing in a recent photo and wrote, “Zip up is hard.” Drake replied, “harder than the album intro or nah,” suggesting that his aside from the overall album, fans can especially look forward to the album opener.

It’s like that Drake?!? ? tag who you think the producer is ?

An official tracklist has not yet been revealed, but “Nice for What” is apparently slated to be featured on the record. Drake is also rumored to debut another song with Lauryn Hill, but until then, revisit the video below.

On May 27th, Drake dropped his new single “I’m Upset”. At this point, it’s not confirmed if “I’m Upset” will be on the album or not, but the Toronto rapper did drop visuals for the song reuniting the cast of Degrassi. 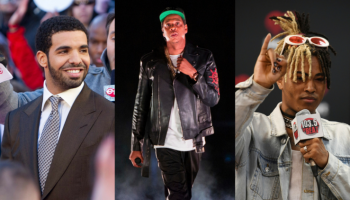