Things are heating up and moving fast for Ariana Grande and new boyfriend Pete Davidson.

According to tattoo artist London Reese, Davidson got a black bunny ear mask tattoo behind his left ear.

The mask looks strikingly similar to the mask Grande occasionally wears on stage and certainly the mask she wore on the cover of her latest album, “Dangerous Woman.”

Reese captioned the black-and-white snap, “We had a good night.”

We had a good night.

However, BuzzFeed reports the caption originally read, “We had a good night somewhere in the hills of Los Angeles. Pete loves him some Ariana.”

While Grande is yet to share her thoughts on the new ink, she did Instagram several messages on Saturday night and one clearly read, “Pete Davidson is the best person on earth goodnight.” Hours after it was revealed that Davidson, 24, got two tattoos that seemingly reference the “No Tears Left to Cry” singer, also 24, he raved about his new love interest’s Wango Tango set on Instagram.

“Are you f—ing kidding me!!!??” the Saturday Night Live star wrote alongside an image of Grande’s performance.

“So f—ing lit,” he continued, adding four heart-eyed emojis to the message.

During her set, Grande gave fans their first taste of “The Light Is Coming,” a new song from her forthcoming album Sweetener.

Telling the crowd that she would be releasing the song on June 20, Grande went on to explain the track “features my big sister Nicki Minaj,” according to Rolling Stone.

“We wanted to give you a little preview of it tonight,” she continued. “I’m so nervous.”

Grande previously shared a preview of the song on social media, which was retweeted by Minaj.

Showing off Davidson’s new inkings on Saturday, tattoo artist London Reese posted a photograph of a black bunny ear mask — which looks similar to the accessory worn by Grande on the Dangerous Woman album cover — located behind Davidson’s ear. Reese later disabled comments on the image. Reese also deleted a photograph of Davidson’s second tattoo, which consisted of Grande’s initials on his hand, according to the outlet.

While Davidson didn’t directly reference the singer in his set, he did appear to be wearing one of her sweatshirts onstage.

In Atlantic City @petedavidson & I giving a handful of Laugh Beatings before Dave Chappelle went up and destroyed the stage. Got to meet @arianagrande who cool as frozen mangos! #davechappelle #wilsylvince #petedavidson #arianagrande #laughbeatings #atlanticcity #ac

Davidson, 24, has gotten a neck tattoo of Grande’s black mask-and-bunny-ears headdress from Grande’s Dangerous Woman tour, according to an Instagram post by Los Angeles tattoo artist London Reese. “We had a good night,” Reese captioned the black-and-white photo, after having previously continued the caption with “somewhere in the hills of Los Angeles. Pete loves him some Ariana,” according to Buzzfeed.com.

the chamber of secrets has been opened …

Following the 24-year-old Grande’s performance at the KIIS-FM Wango Tango show in Los Angeles Saturday,  Davidson posted a still image from the show on Instagram Stories, captioned “Are you [expletive] kidding me!!!?? So [expletive] lit,” followed by four smiley-face emoji with hearts for eyes.

Three hours later, Grande posted an Instagram Stories image of several pieces of text against a black background. Read one: “pete davidson is the best person on earth goodnight.”

One day later, Grande shared her own PDA-packed photo of the couple, writing, “I thought u into my life woah ! look at my mind.” 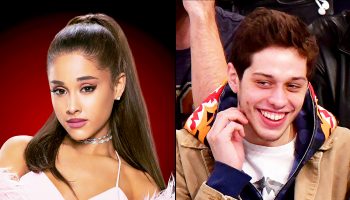