For two decades, U.S. terrorism efforts were almost exclusively fixed on disrupting plots masterminded by jihadist groups like al-Qaeda and ISIS. The federal government built a globe-spanning surveillance and intelligence network to keep tabs on their leaders and foot soldiers. Federal agents obtained sweeping authorities to investigate suspects with even the slightest link to foreign terrorist organizations.

All the while, the threat posed by homegrown far-right extremists deepened. Groups operated in the shadows, spreading hate-filled messages and amassing unlikely followers as social media use soared. Right-wing and white nationalist terrorist attacks spiked, killing twice as many Americans in domestic terror attacks than radical Islamists have since 9/11.

Last week, there was a sign that the federal government’s priorities may finally be shifting to meet that reality. On Thursday, federal and state authorities revealed a high-profile bust of an elaborate scheme to kidnap the Democratic governor of Michigan Gretchen Whitmer, resulting in the arrest of 13 people linked with a local rightwing militia group.

The foiled plot, which was outlined in a detailed sworn affidavit, showed a deeply resourced case built on a network of confidential informants, recorded conversations, social media posts and intercepted text messages. It’s a concentration of law enforcement effort and coordination rarely seen in the aftermath of the 2001 attacks, which drove the government’s focus away from white supremacists, anti-government militias and other like-minded groups to Islamic terrorist organizations. 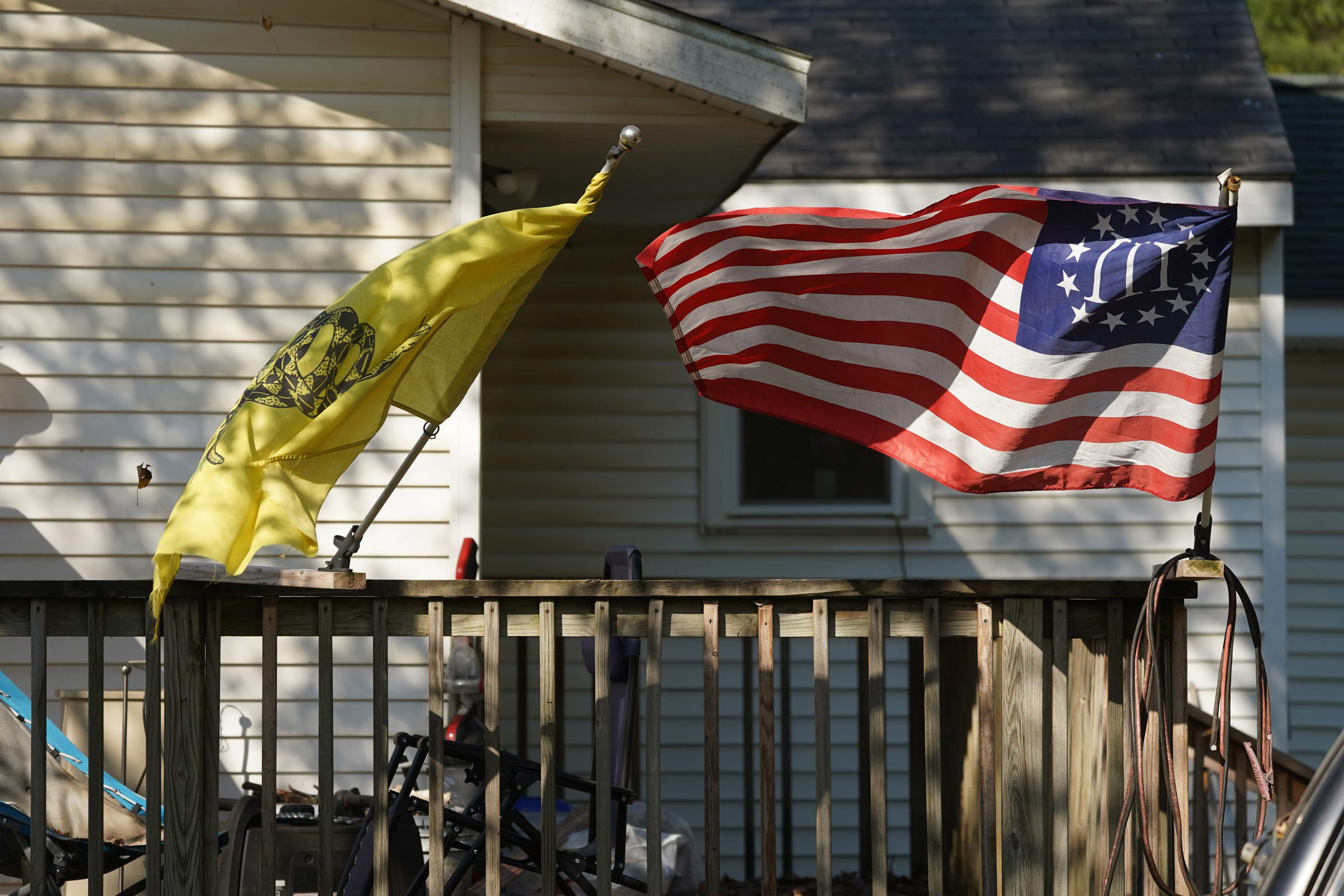 A Three Percenter flag and a Gadsden Flag fly onthe home of Michael Null in Plainwell, Mich., on October 9, 2020. Null one of 13 suspects accused of plotting to abduct and possibly harm Michigan Gov. Gretchen Whitmer.

“There has been a disturbing increase in anti-government rhetoric and the re-emergence of groups that embrace extremist ideologies,” Michigan Attorney General Dana Nessel told reporters after sharing the details of the affidavit. “These groups often seek to recruit new members by seizing on a moment of civil unrest and using it to advance their agenda of self-reliance and armed resistance. This is more than just political disagreement or passionate advocacy. Some of these groups’ mission is simply to create chaos and inflict harm upon others.”

This year has not been short on feelings of uncertainty and frustration for extremist groups to capitalize on. The COVID-19 lockdowns, the protests over racial justice, and the 2020 election are a lightning rod for the more radical elements of many of these groups that may resort to violence, says Amy Cooter, a senior lecturer at Vanderbilt University who has spent more than a decade tracking and studying militias, including the Wolverine Watchmen militia that was plotting to kidnap Whitmer.

“It’s a perfect storm of factors right now,” says Cooter. “A lot of people underestimate the extent to which these groups are a barometer for feelings a lot of middle America has, and to think of them as so ‘out there’ is ignoring that they’re indicative of broader trends.”

On Oct. 6, two days before the news of the Whitmer plot emerged, the Department of Homeland Security (DHS) issued its first-ever “Homeland Threat Assessment” that said far-right extremists pose the largest threat to the U.S. homeland, other than adversarial nation-states. The 26-page document ominously warned that domestic extremists “might target events related to the 2020 Presidential campaigns, the election itself, election results, or the post-election period” and that they “could mobilize quickly to threaten or engage in violence.” It identified open-air events, “such as campaign- associated mass gatherings, polling places, and voter registration event” as “the most likely flash points for potential violence.”

It was an unusually pointed statement by DHS, which under the Trump Administration has been pressured to downplay the threat posed by right-wing and white supremacist groups, according to former intelligence officials and whistleblowers. In recent years, the FBI also has not prioritized white-supremacist violence even among homegrown threats, listing “eco-terrorism” as the top risk, former special agent Michael German told the House Committee on Oversight and Reform in May 2019.

To respond to this new threat, the FBI recently coined a new term, “domestic violent extremist,” people who are radicalized by socio-political conditions, racism, and anti-Semitism, as opposed to “homeland violent extremist,” who are global jihad-inspired. Last year, the agency established the Domestic Terrorism-Hate Crimes Fusion Cell that pursues racially motivated violent extremists. 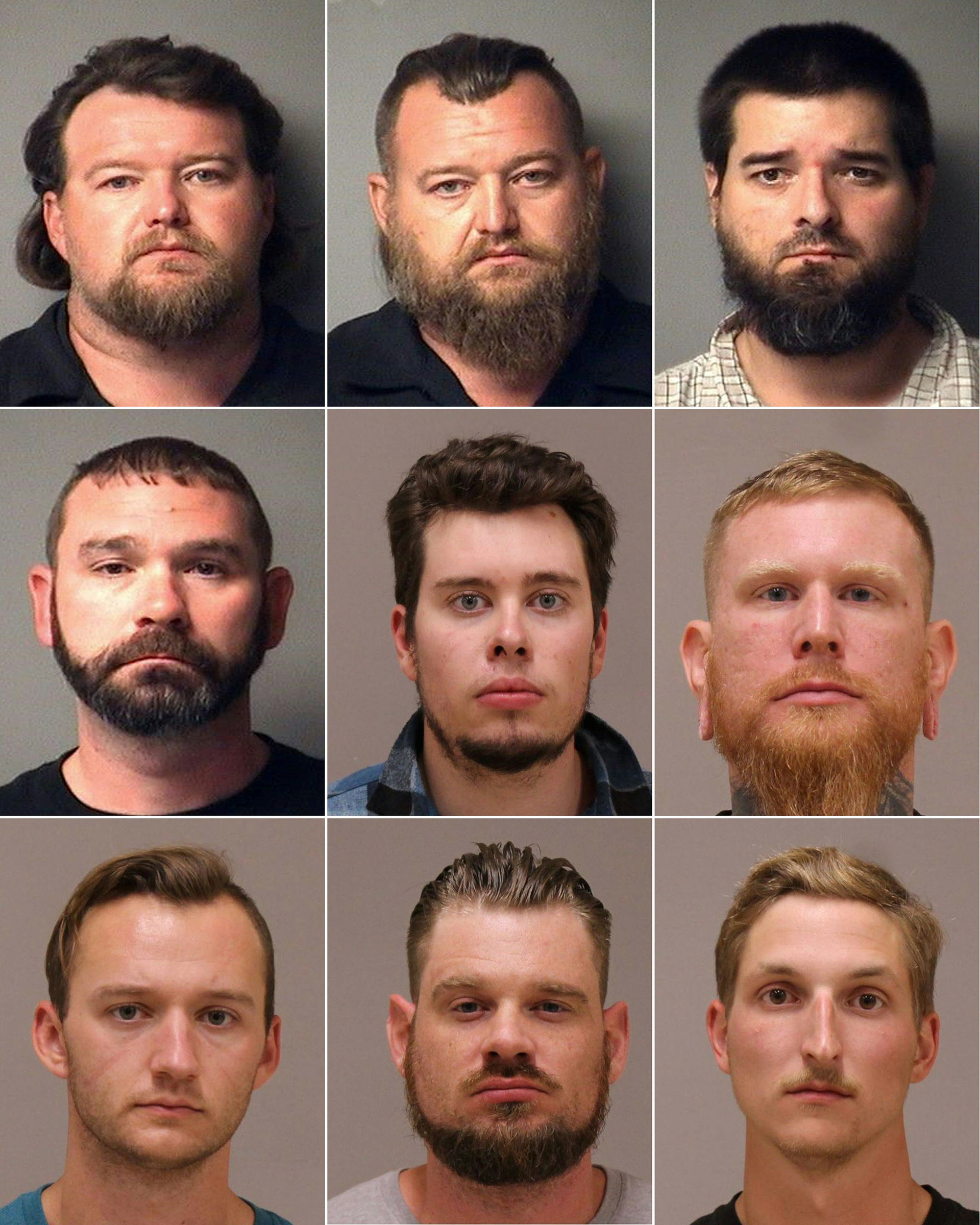 The FBI had been tracking the Michigan militia group since at least March. At that time, the agency said the extremists attempted to obtain a list of local law enforcement officers’ home addresses so they could attack or kill them. The effort to kidnap Whitmer got underway in June, when a meeting of Michigan militia members discussed overthrowing state governments “that they believed were violating the U.S. Constitution” by taking away their rights through lockdowns and quarantines, according to an undercover law enforcement source who attended the meeting.

A plot evolved among the group members to transport her to Wisconsin and put her on trial for “treason,” as part of a broader plot to overthrow the government, according to the sworn FBI affidavit. The militia members also complained about state laws and COVID-19 restrictions, specifically mentioning the safety measures on gyms.

In their conversations, the men also discussed “taking” Virginia Gov. Ralph Northam, FBI agent Richard Trask testified to the U.S. District Court in Grand Rapids on Tuesday. They expressed similar anger about the COVID-19 measures that Northam, like Whitmer, had implemented in his state earlier this year.

The FBI’s case lays out how the Wolverine Watchmen suspects were part of a broader set of self-proclaimed militia members who got together on online platforms to talk about targeting government officials. “They discussed possible targets, taking a sitting governor, specifically governors of Michigan and Virginia, over shut down orders,” Trask testified. “The understanding at the time was to potentially kidnap a sitting governor and remove them from office.”

One of the men charged, Adam Fox, told the group that he needed 200 men to storm the Michigan state Capitol and take hostages, according to the FBI. This plot was meant to take place before the Nov. 3 election, according to federal agents. “Several members talked about murdering ‘tyrants’ or ‘taking’ a sitting governor,” according to the document. At least four of the 13 suspects had attended rallies at the Michigan Capitol earlier in the year, according to law enforcement and local news reports. Michael and William Null, twin brothers and militia members who have been charged in the kidnapping plot, carried firearms as they demonstrated against Whitmer’s COVID-19 restrictions on the Capitol steps in late April, according to Michigan officials.

It echoed, almost verbatim, the warning outlined in the DHS’ “Homeland Threat Assessment.” The agency noted it was “particularly concerned about the impacts from COVID-19 where anti-government and anti-authority violent extremists could be motivated to conduct attacks in response to perceived infringement of liberties and government overreach as all levels of government seek to limit the spread of the coronavirus that has caused a worldwide pandemic.”

The recent statements by DHS and the FBI show how far the threat of domestic extremism – and its acknowledgment by law enforcement – had evolved in the past decade. In 2009, an internal DHS report that noted the rise in “rightwing extremism” and urged local law enforcement to study these groups to better understand their ideology caused a massive backlash when it was leaked to conservative media. Several Republicans in Congress pushed to have it withdrawn, calling it an attack on conservatives, and even called for then-DHS Secretary Janet Napolitano’s resignation. DHS ultimately rescinded it and Napolitano apologized.

Not long after the DHS report was released, in the summer of 2009, attendance at Michigan militia events doubled, according to an assessment by Cooter. This growth was fueled by unrest over the Iraq War, the global economic recession and the election of the country’s first black president. But it took another decade before federal law enforcement agencies began to define the threat posed by homegrown far-right extremism in stark terms. By then, social media platforms had made it increasingly easy for many of these groups to recruit and organize online.

“What’s disturbing is the scope of it — most militia plots are two, three, four people living in the same proximity,” said Daryl Johnson, a former DHS senior analyst who authored the 2009 report warning of the rise of right-wing extremism. “Here you’ve got a ring of at least 13 people in multiple states, it shows how much these groups have proliferated.” 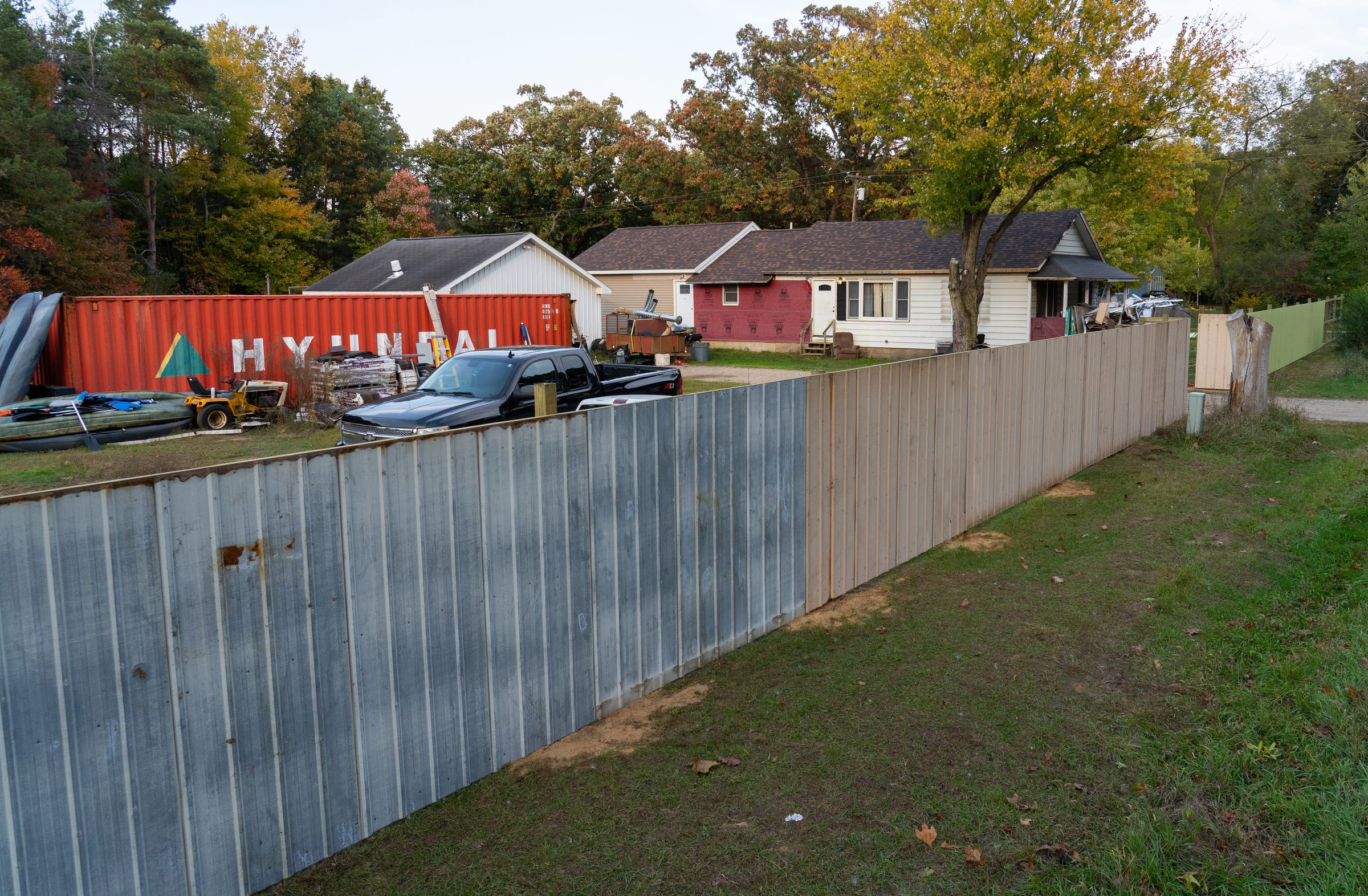 A wall recently constructed outside of the home of William Null in Shelbyville, Mich., Oct. 9, 2020. Null is one of 13 suspects accused of plotting to abduct Michigan Gov. Gretchen Whitmer.

Though militia groups have traditionally harbored anti-government stances, many militia members have been won over by President Donald Trump’s messaging, and have more recently focused their anger toward Democrat political leaders in particular. This past summer, militia activity was more visible across the country as armed pro-Trump “patriot groups” appeared at protests in Louisville, Gettysburg and Portland, raising concerns from government officials and civil right groups about where else they might appear when Americans head to the polls for the presidential election on Nov. 3.

“There has to be heavy penetration of these extremist groups to catch people before they attack,” Seth Jones, a former U.S. counterterrorism official now with the Center for Strategic and International Studies. “It’s going to be difficult because, unlike the Islamic State or al-Qaeda as organizations, they’re very decentralized. So it just makes it really hard for the joint terrorism task forces, which have this responsibility across the U.S., to do this.”

The recent public shift by DHS and other agencies outline the threat posed by American far-right extremists may be too little, too late, says Johnson, the former DHS analyst.

“Year after year the attacks kept mounting, and now in 2020 they’re finally acknowledging it [but] I’m concerned we may be at the point of no return,” he tells TIME. “The momentum and the factors that are fueling these movements are overwhelmingly strong and it’s gonna take a hell of an effort over many years to stem the tide.”

Write to W.J. Hennigan at william.hennigan@time.com.