A Photographer’s Journey Through American Conspiracies

In November 2017, the House Intelligence Committee released fake advertisements found on Facebook in the walk up to the 2016 election. As politicians on each side argued over whether the ads changed the election results, the heart of the revelation was way more disturbing. The Russian ads targeted the American public to deepen wounds on divisive issues and spread false information. Facebook said the posts were “ what we saw from these actors was an insidious attempt to drive people apart,” according to Colin Stretch, the general counsel for the company.

In 2020, less than one month before the election, America seems even more divided and deeply fractured after a turbulent year with a deadly pandemic, economic pain, and a chaotic presidency. With many Americans on lockdown, social media has been a vital form of communication — but one that is also driving dangerous conspiracies. From the false QAnon conspiracy, which promotes Trump as the final defense against a “deep state” cabal of Democrats and Hollywood elite who traffic, rape, and cannibalize children, to fake claims that COVID-19 is a hoax, the spread of disinformation on social media is deepening divisions that some fear could lead to a further rise in civil unrest in the coming weeks. 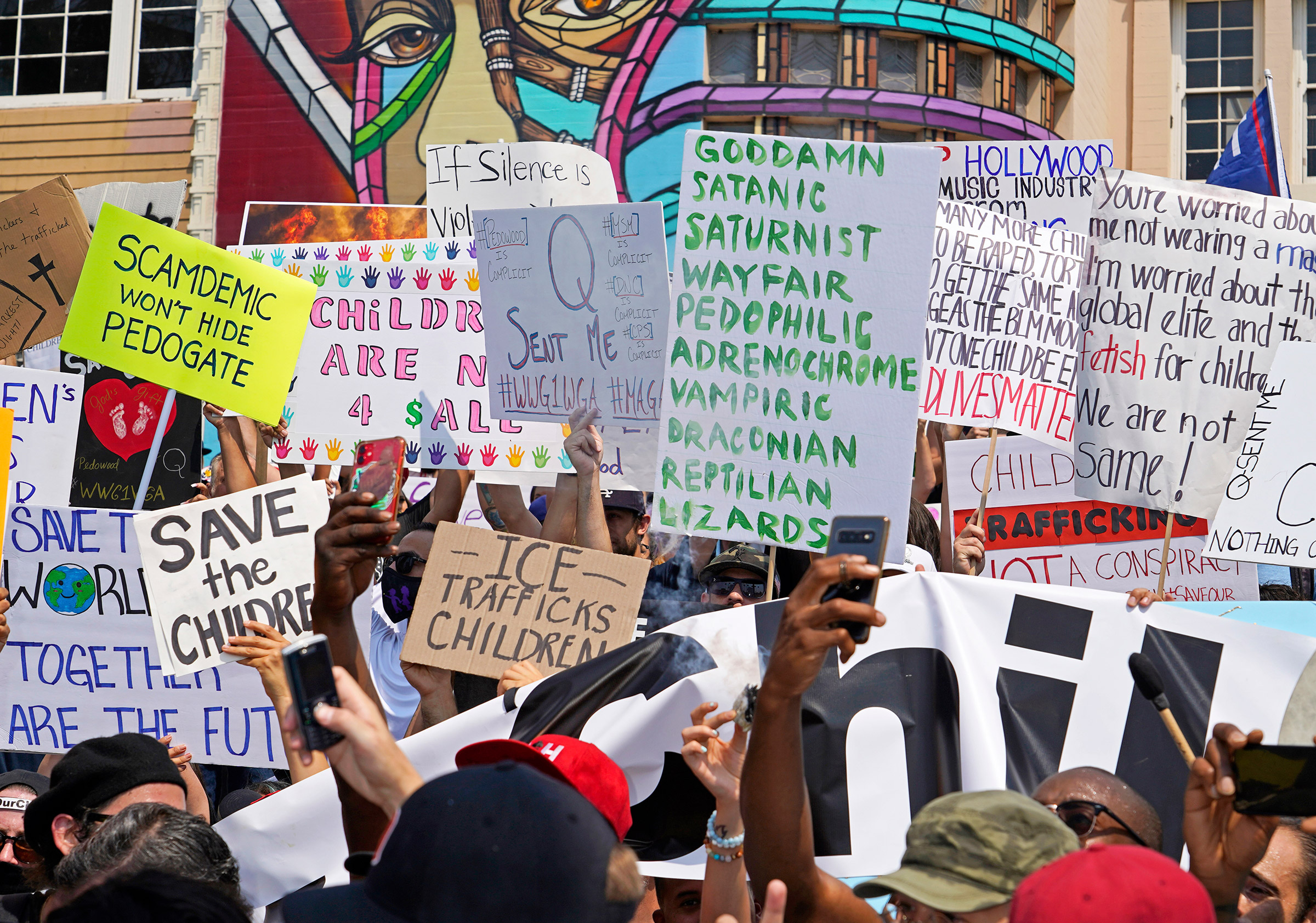 Signs showing various conspiracy theories at a Save Our Children rally in Los Angeles, Aug. 22, 2020.

Convoluted messaging from the White House on these fake theories doesn’t help. During the Oct.15 NBC Town Hall President Donald Trump denied knowing what QAnon was, and then quickly contradicted himself, saying, “What I do know it is they are very much against pedophilia. They fight it very hard but I know nothing about it.”

To combat the spread of false information, on Oct. 15 YouTube announced “efforts to curb hate and harassment by removing more conspiracy theory content used to justify real-world violence.” Facebook also recently said they would ramp up their fight against disinformation, particularly QAnon, by removing pages and groups from the app, but it may not be effective—or it may be too late.

Jamie Lee Curtis Taete, an LA-based photographer originally from England, spent more than a year covering America political rallies and protests he mostly found on Facebook. He began to see the conspiracies manifest themselves through the believers caught in the fervor of misinformation that show the social media platform’s darkest side as a divided reality. 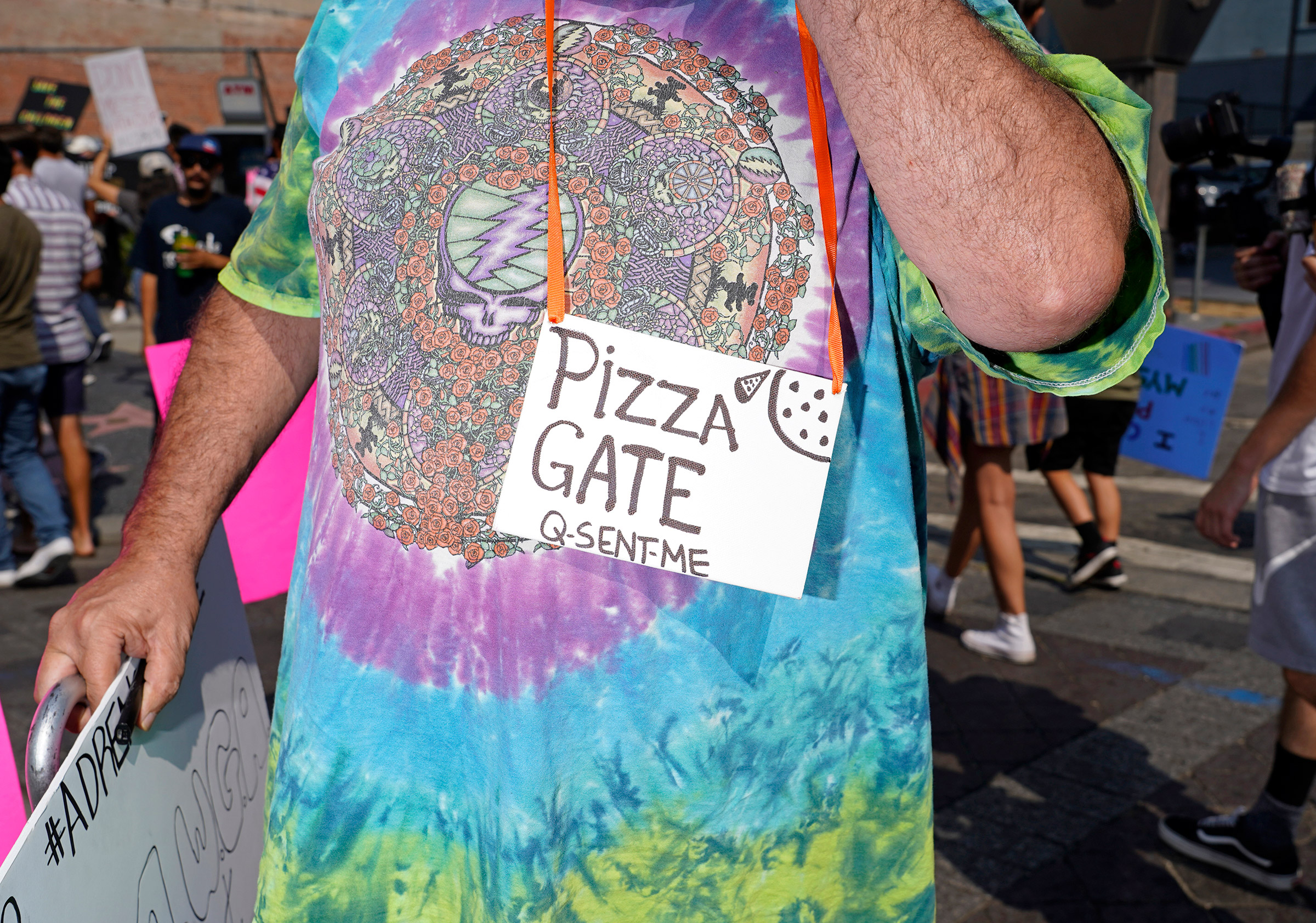 A protester with a Pizzagate and QAnon sign at a Save Our Children rally in Los Angeles, Aug. 22, 2020.

Speaking via Zoom, he recalls how it all began.

When did you start noticing conspiracies in the political landscape?

I always had an interest in documenting people with fringe beliefs; it used to be a lot more difficult to find. I started seeing more of it in the real world in 2019, and there’s been a huge explosion of conspiratorial thinking both online and off since COVID started.

We’ve always lived with conspiracies — like the moon landing was fake, or conspiracies around who killed JFK. I think they’ve gotten worse this year because: A, social media makes it easy for people with the same beliefs to connect more easily, and B, everybody is stuck at home, spending all their time on the internet, which makes it easy to fall down these rabbit holes.

It’s also something you see when the world is in turmoil, and things are unstable. People don’t know what they can trust. I think it’s a lot easier for people to cling on to something like QAnon, which is an easily understood—if imaginary—battle between good and evil, than the complicated reality of the world. 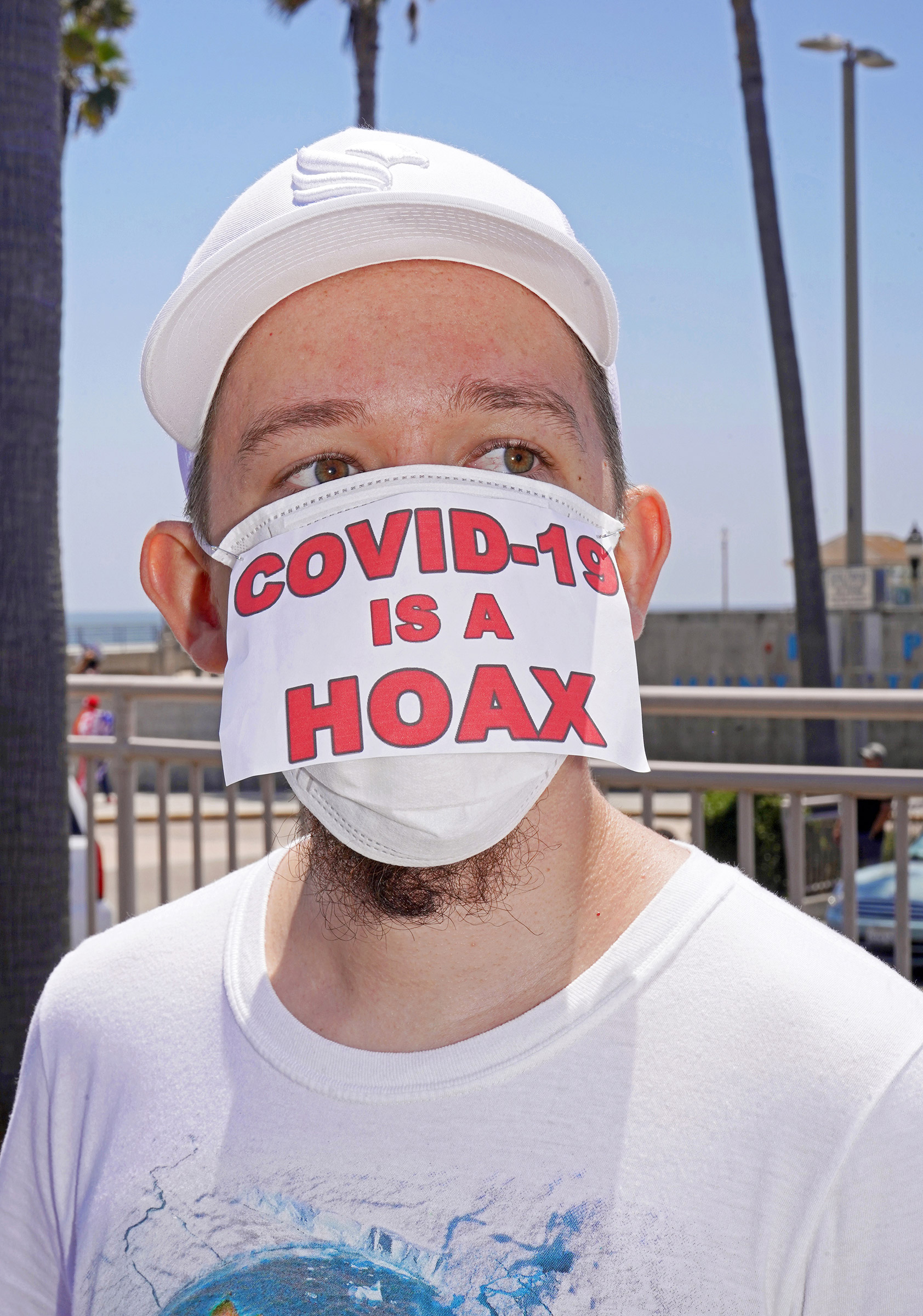 Can you tell me about the process of finding conspiracies in the social media landscape?

I’m in a lot of Facebook groups. That’s the only thing I use Facebook for these days. I’ve joined various QAnon, far-right, Three Percenter, and militia Facebook groups. The ‘groups’ tab on Facebook shows a curated newsfeed from the groups you’re in. I use that and Facebook’s events pages to keep up on real world happenings.

Many of the pictures here are from anti-lockdown rallies. But the boundaries between these things have become incredibly blurred. The event might be a Trump Rally, but you’re still going to see a huge anti-lockdown presence and QAnon signs. 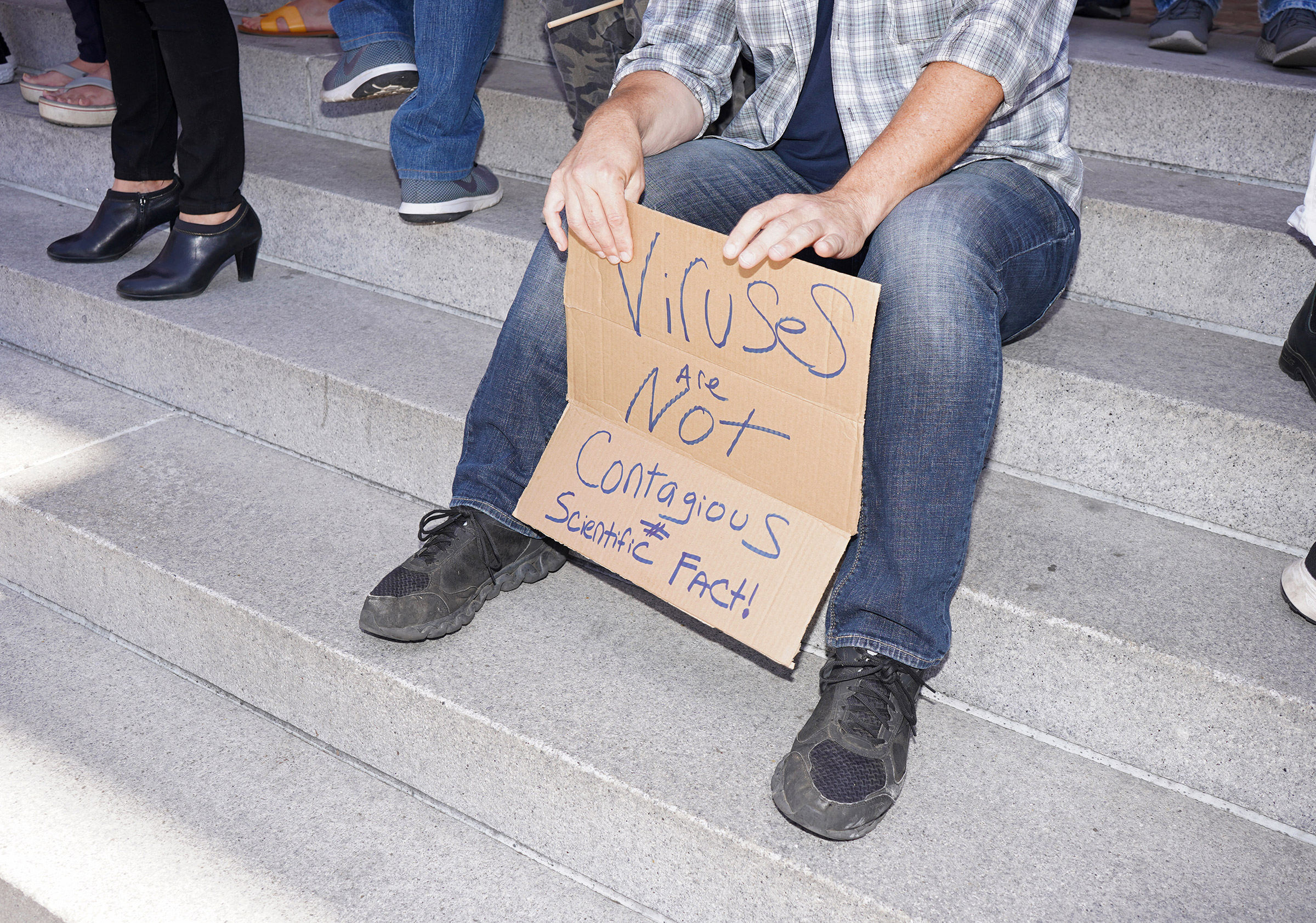 A protestor’s sign at a rally calling for the reopening of California from coronavirus lockdown measures in Los Angeles, May 24, 2020. 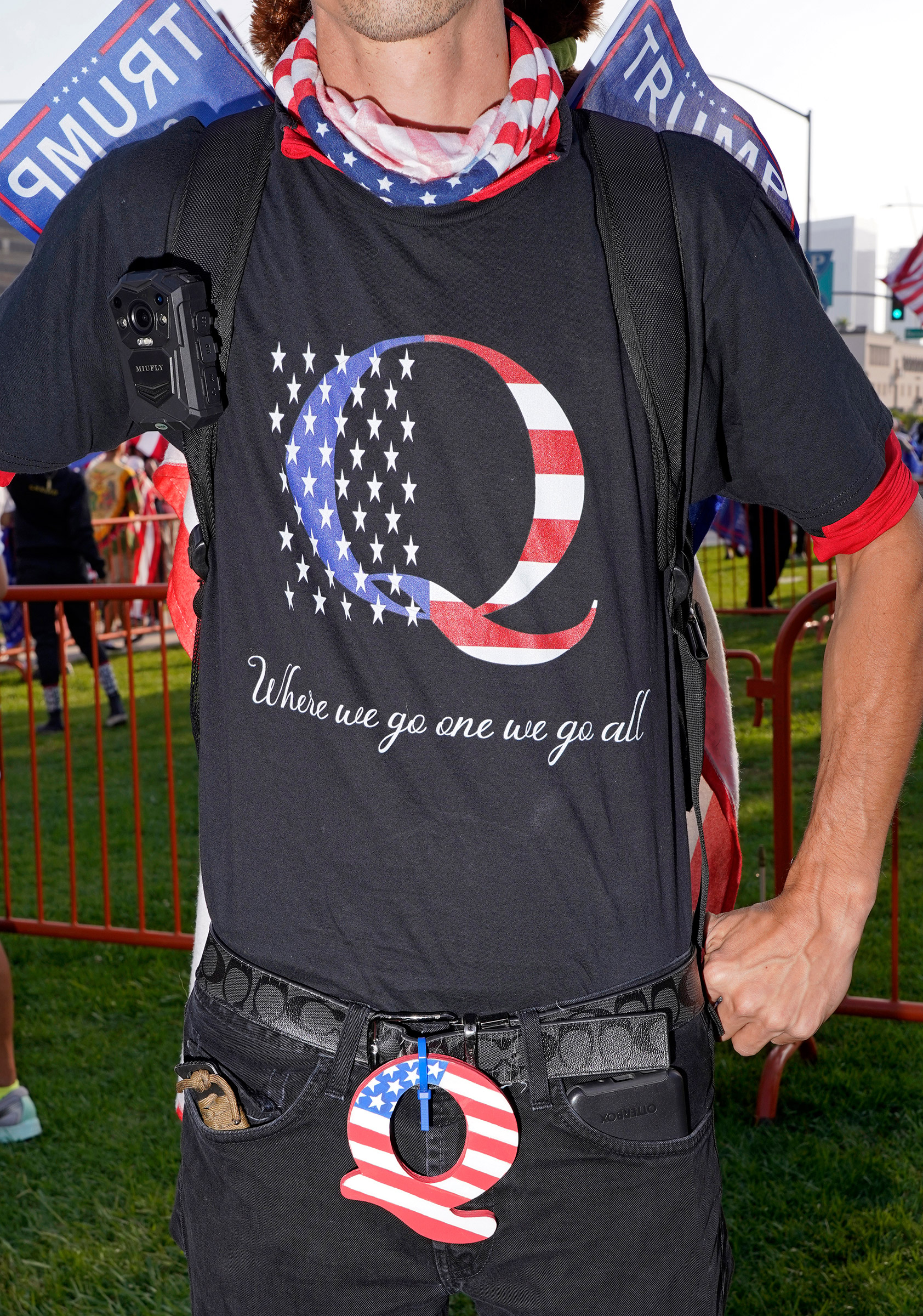 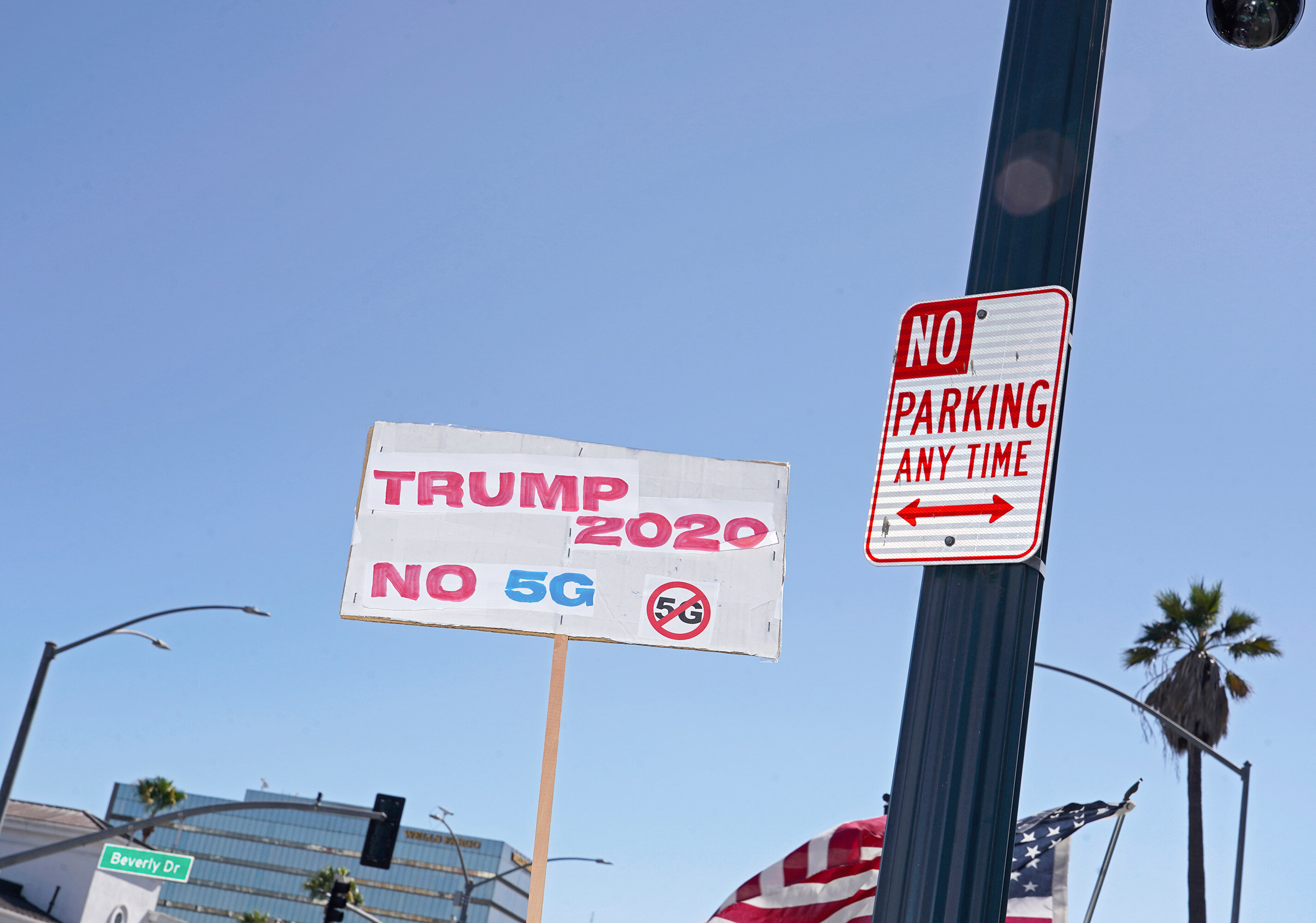 Do you find it hard to question supporters about Trump?

It can be hard to find common ground with people at these events, because many of them refuse to admit Trump is at fault, no matter how trivial the issue is.

Which is by design. I don’t think Trump cares if he’s seen by people as a liar. He just wants to bring reality into question as much as possible because that’s the most convenient thing for him, ultimately. 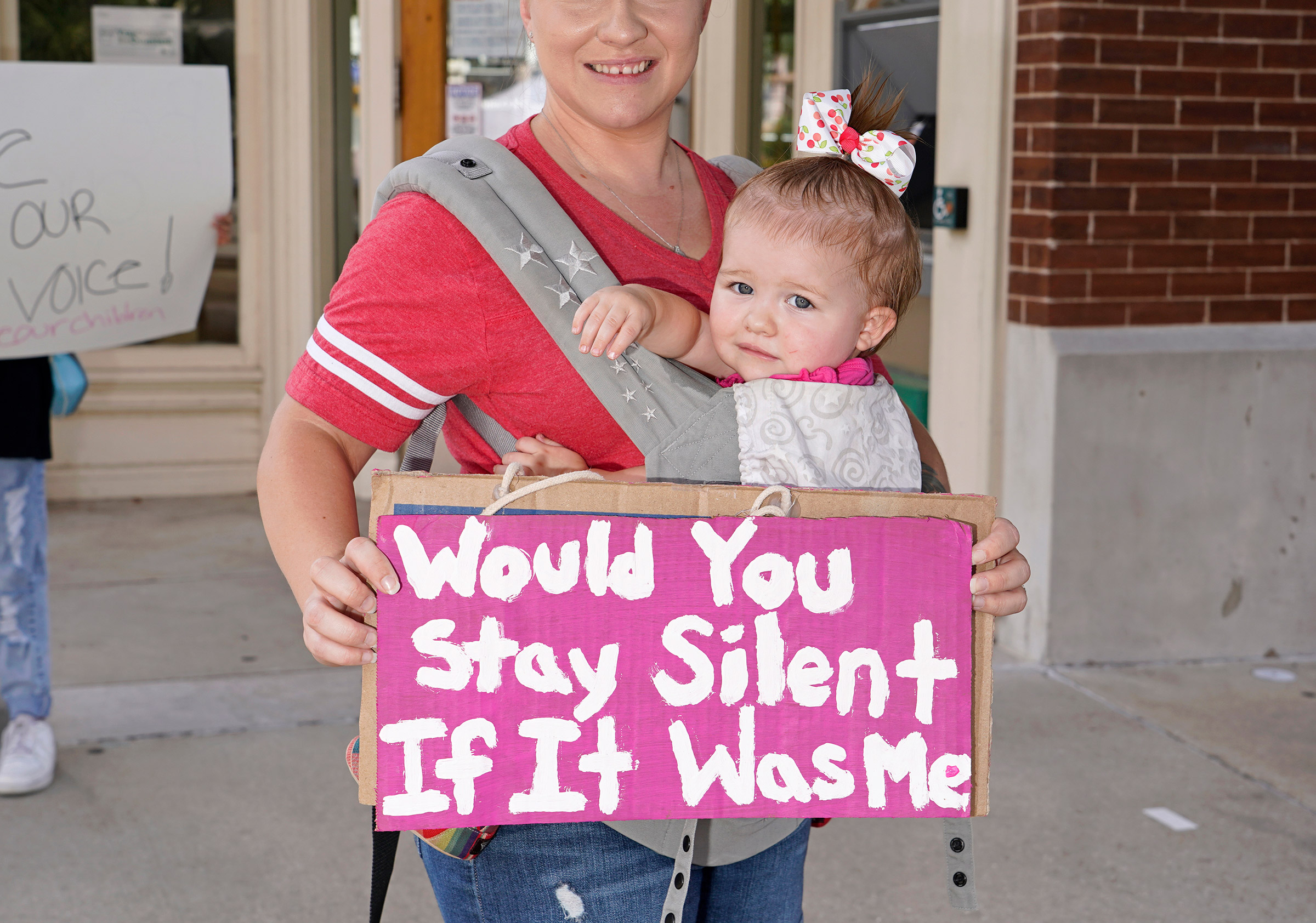 Protester at a Save Our Children rally in Fayetteville, Arkansas, Sept.r 5, 2020. 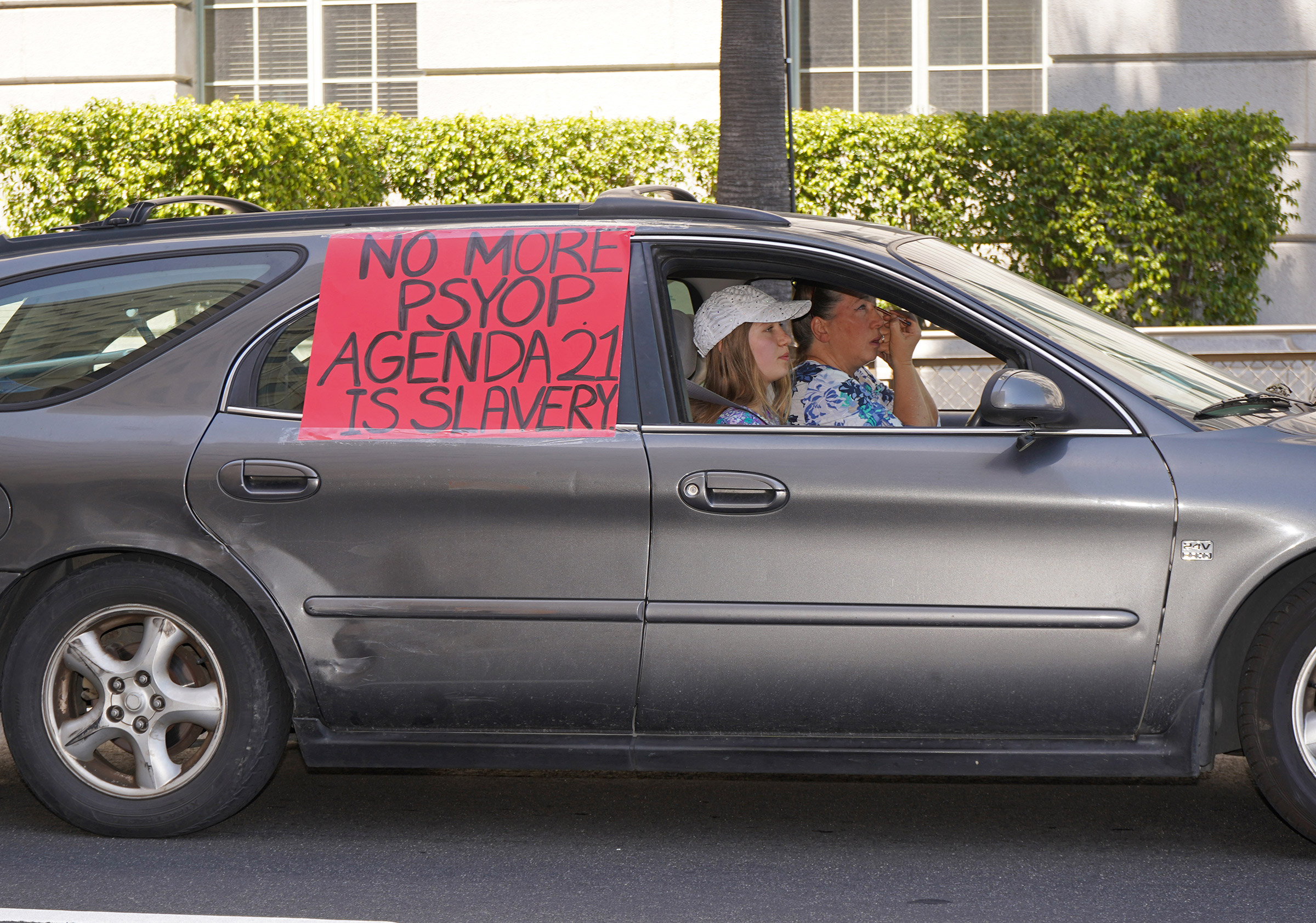 Protesters at an anti-lockdown protest in Downtown Los Angeles, July 13, 2020.

I have a family member who started posting “Save the Children” messages about children being trafficked. They believe this is the biggest story that the media is not reporting. As a reporter, I’m like, human trafficking is an important issue, but this is not the same. It’s hard to have a conversation and not seem uncaring.

Yes, it very difficult to have a critical conversation that’s about a campaign to stop child abuse, because you sound like your pro-child abuse. But the type of human trafficking they’re talking about isn’t really happening in this country. Human trafficking exists and is bad, but the reality is more complex and is often linked to abuse, survival sex work, and homelessness. It’s not what you see in Taken and Rambo 5.

Can you tell me what they say is happening? 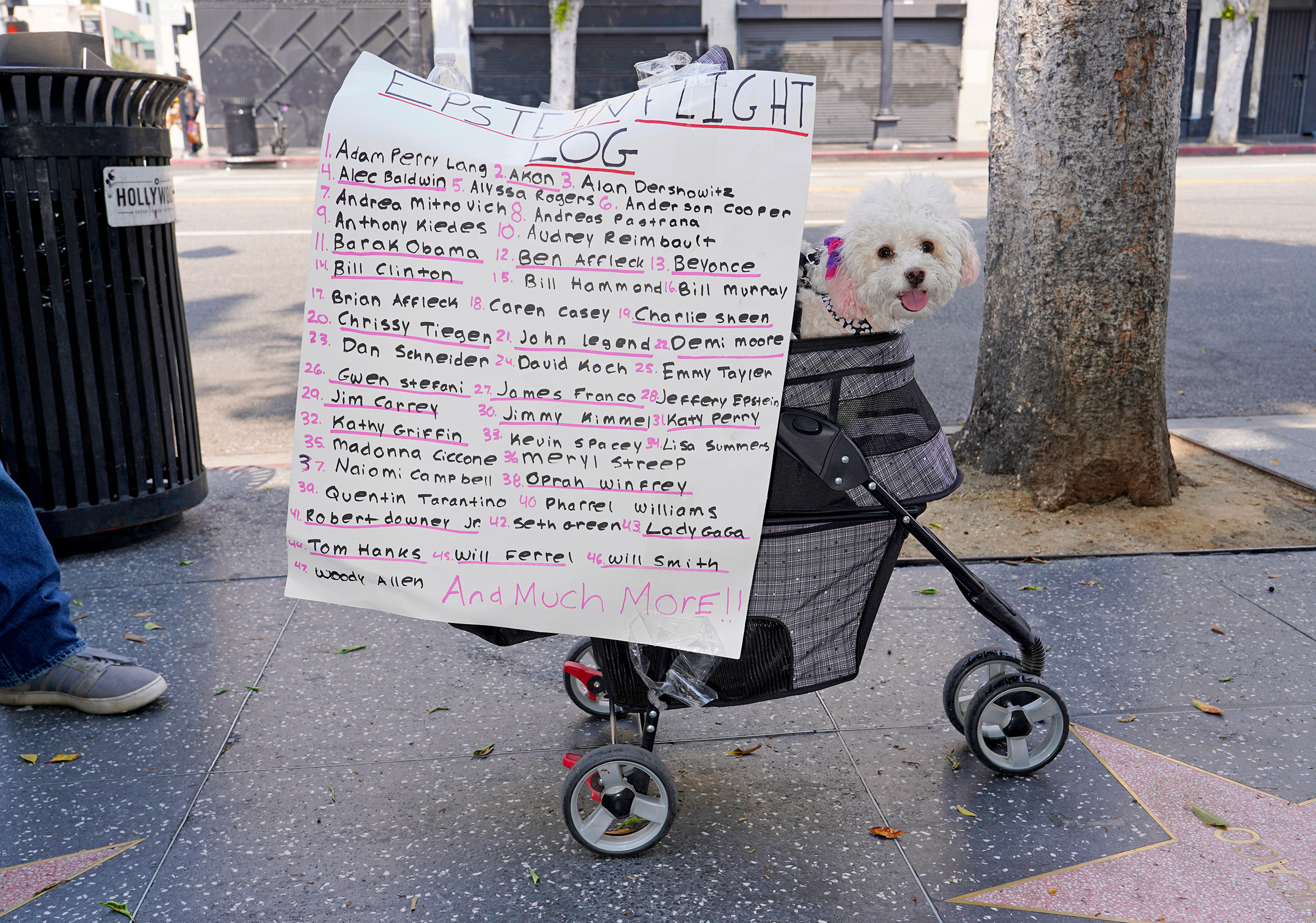 In your work on Instagram, I’m shocked by someone holding up a sign about Tom Hanks being a pedophile. When you publish that work, I fear the photographs could be removed from the original context. What’s the best way to present this work?

It’s difficult but I sort of think the rules have gone out of the window a little bit. In the past I’d maybe lean toward not wanting to amplify toxic views or give people more attention, but the ‘Tom Hanks is a pedophile’ thing is a huge narrative in the QAnon world, so there are potentially hundreds of thousands of people who think Tom Hanks is murdering children to cannibalize them or has been executed or replaced by a body double. I think it’s important to look at the specifics of what these people believe, rather than speaking generally about “the QAnon conspiracy theory,” because it shows how ridiculous these things are.

I think a lot of media ignores some of the more out-there sides of these conspiracies because they’re worried about amplifying it. Or it’s difficult to use traditional reporting methods to report on them. Like, if you were to approach Tom Hanks for comment on a story about people accusing him of being a cannibal pedophile, he’s probably not going to respond. And that might lend legitimacy to the theory.

I’m hoping the context and the way I take the photos makes it clear that I think many of these things are absurd. I wouldn’t be posting these conspiracies if I felt there was a chance people were seeing my photos and thinking these things were real. I’m, hopefully, not going to post a sign that has some made-up facts about human trafficking that might seem real if you just stumbled across the picture. 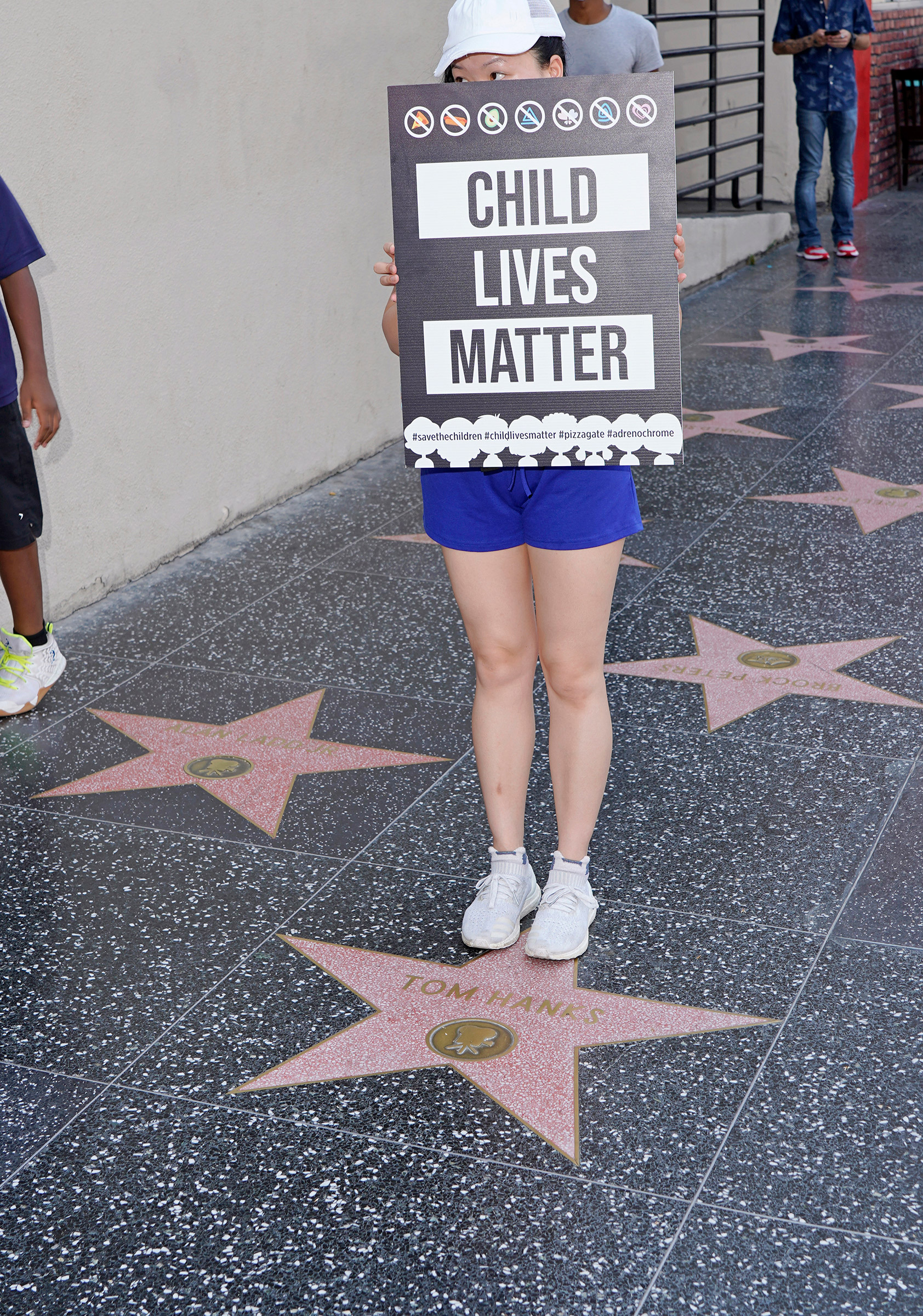 Do you talk to and engage with the people you’re photographing?

Yes. I posted a video recently of a woman I interviewed on Tom Hanks’ star on the Walk of Fame, where she explained that she believes Tom Hanks is killing babies to extract a chemical called adrenochrome, which he uses to keep himself young, and that he’s escaped to Greece to avoid prosecution.

I empathize somewhat. It’s easy to understand how people end up falling for these conspiracies about powerful people if you have Jeffery Epstein and Harvey Weinstein operating in full view of many powerful people, doing a lot of really F-ked up things for years, and that’s true. Is it that much of a stretch to believe that Tom Hanks is killing babies?

What are the other conspiracies that you think are harmful right now?

I’m seeing a lot of anti-Antifa and anti-BLM stuff in the Facebook groups I’m in. “Antifa/BLM riots” are the biggest story on my Facebook right now. If these groups were your main source of information, you would think that the ’94 LA riots have spread across the country and that people are being executed by BLM in the middle of the street. It’s making people extremely scared of these protests, and I think you’re seeing that in the violence that they’re being met with.

These are huge groups that have tens of thousands of members where it’s just a constant feed of those kinds of conspiracies that are met uncritically. A lot of people trust these groups more than they trust mainstream media outlets. 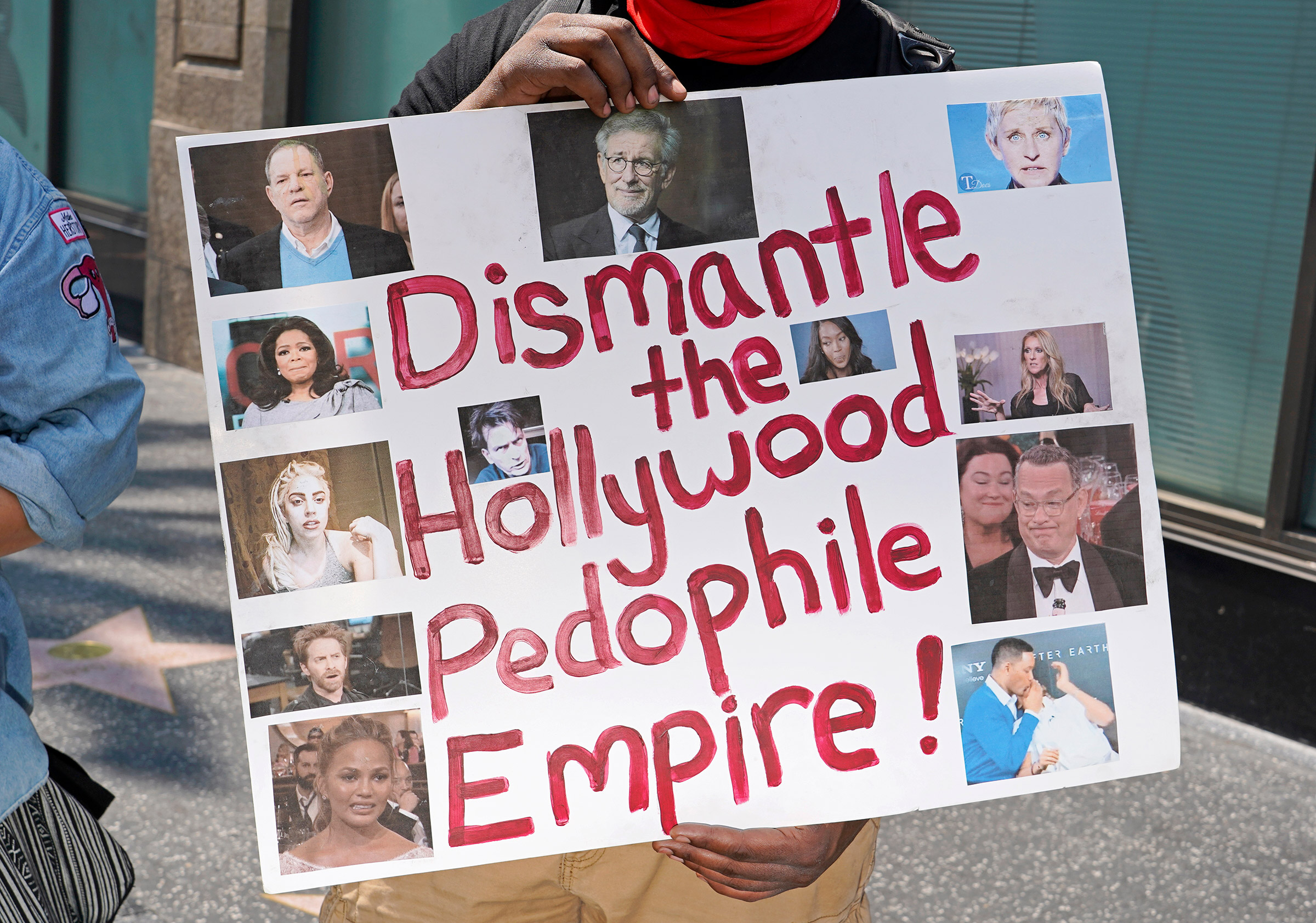 Do you notice Facebook cracking down on this at all?

I think Facebook is mostly dealing with it from a PR perspective. They’ve removed some QAnon groups, but that’s had very little impact on my toxic feed of Facebook groups. The “Save Our Children” groups are still there, “Against Human Trafficking” is still there, which is essentially just QAnon-lite.

I don’t think they have any real interest in stamping out misinformation. That would require a huge investment from them. I don’t think you can use an algorithm to block this stuff. People will find a way around it. 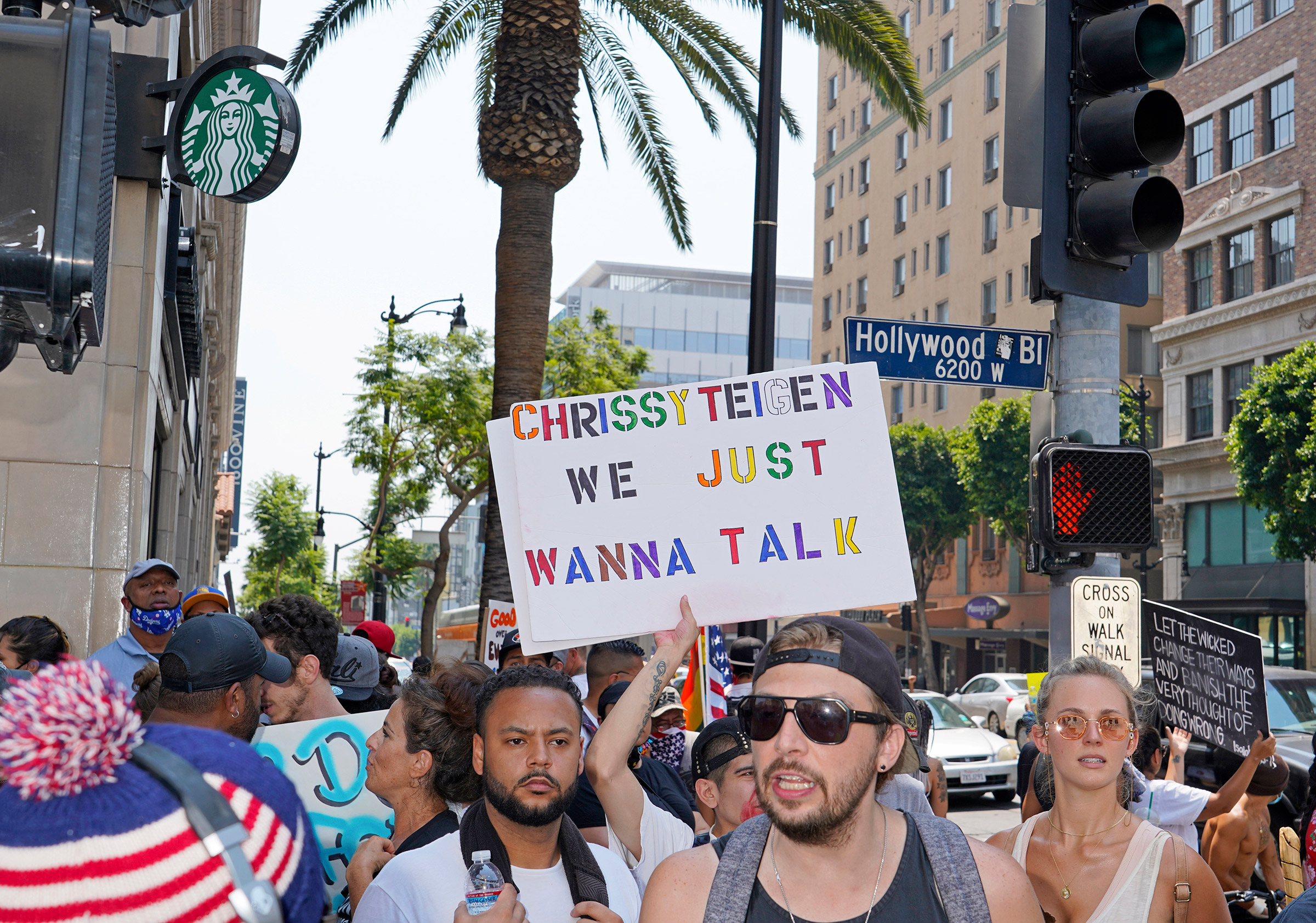 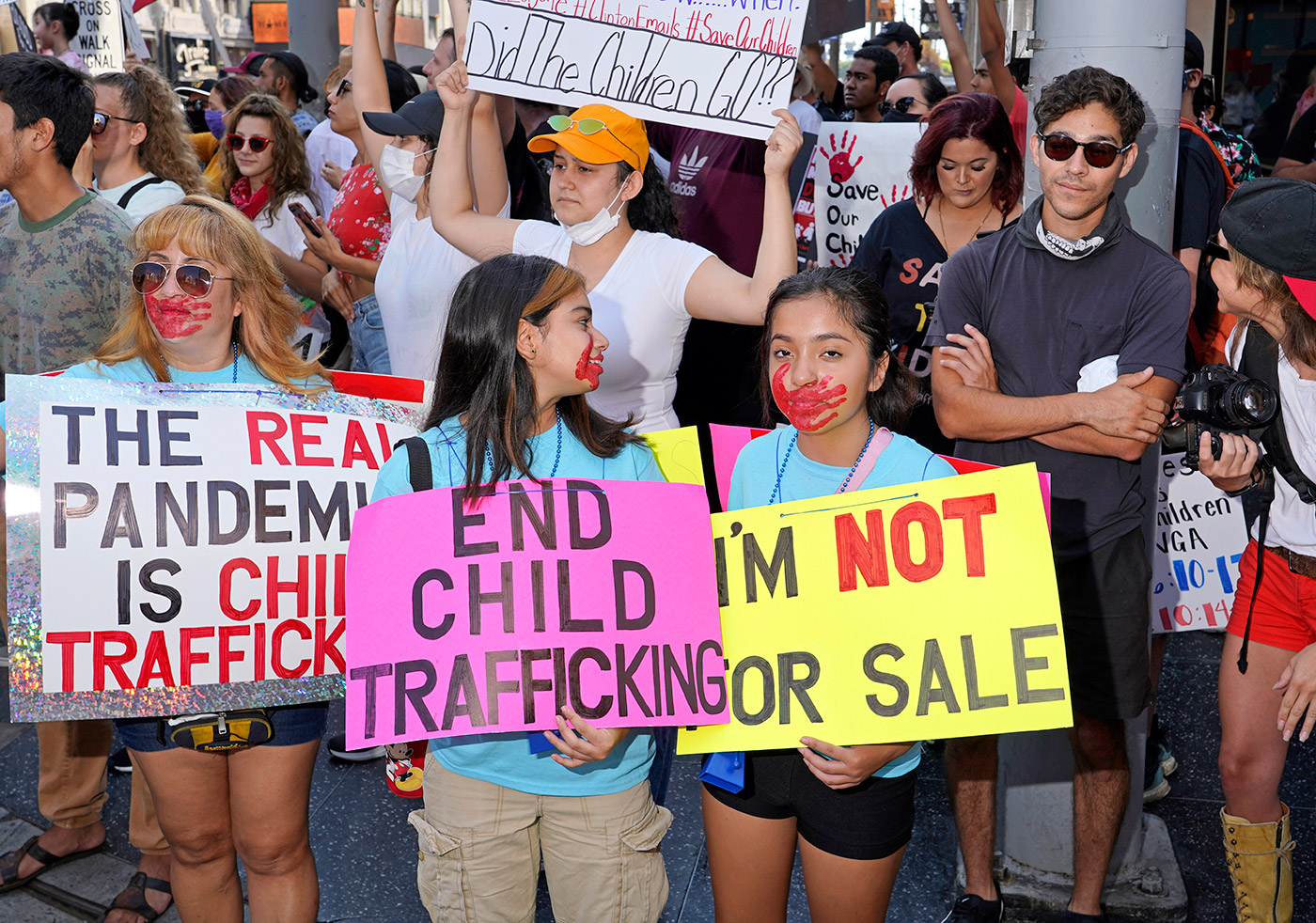 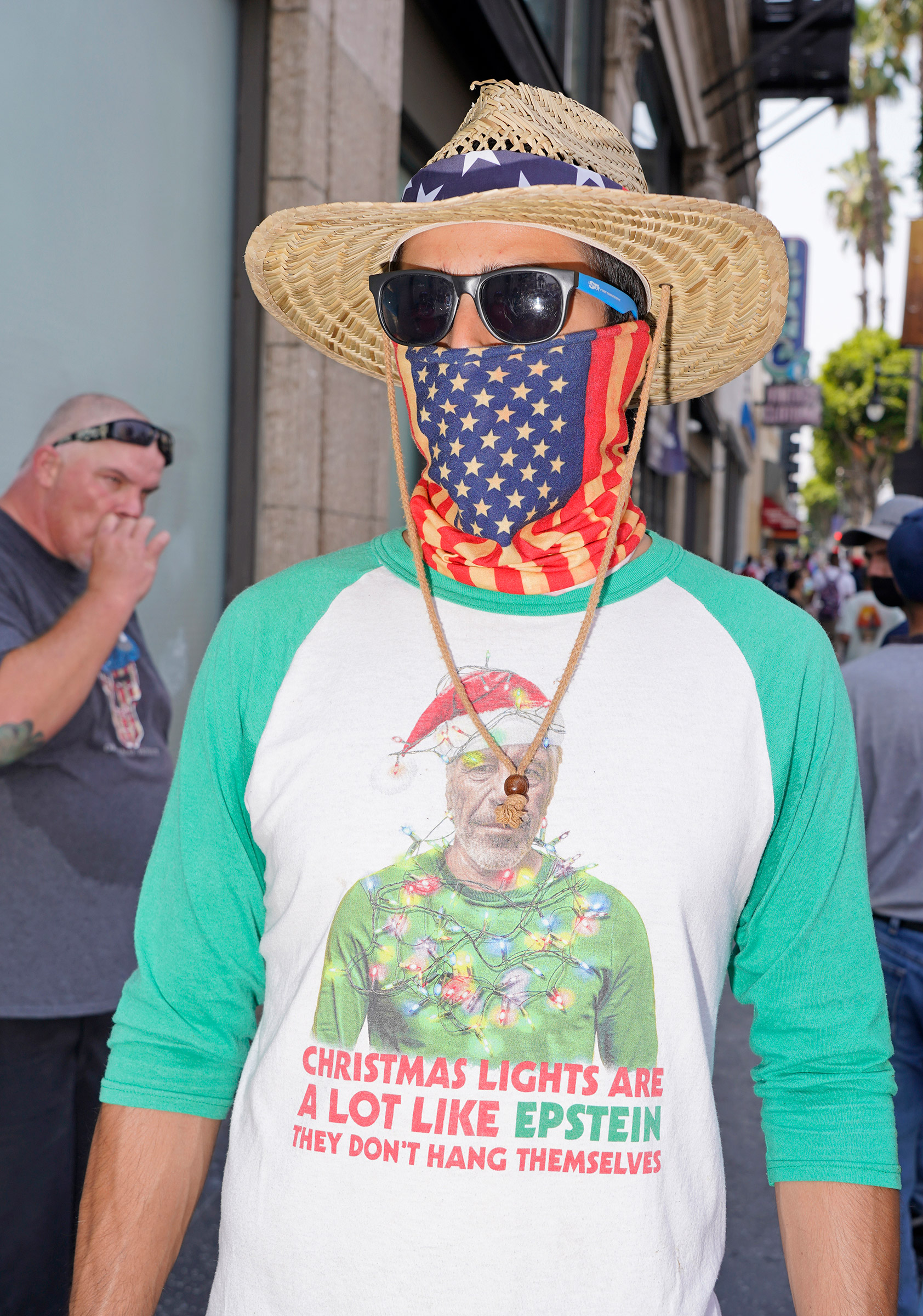 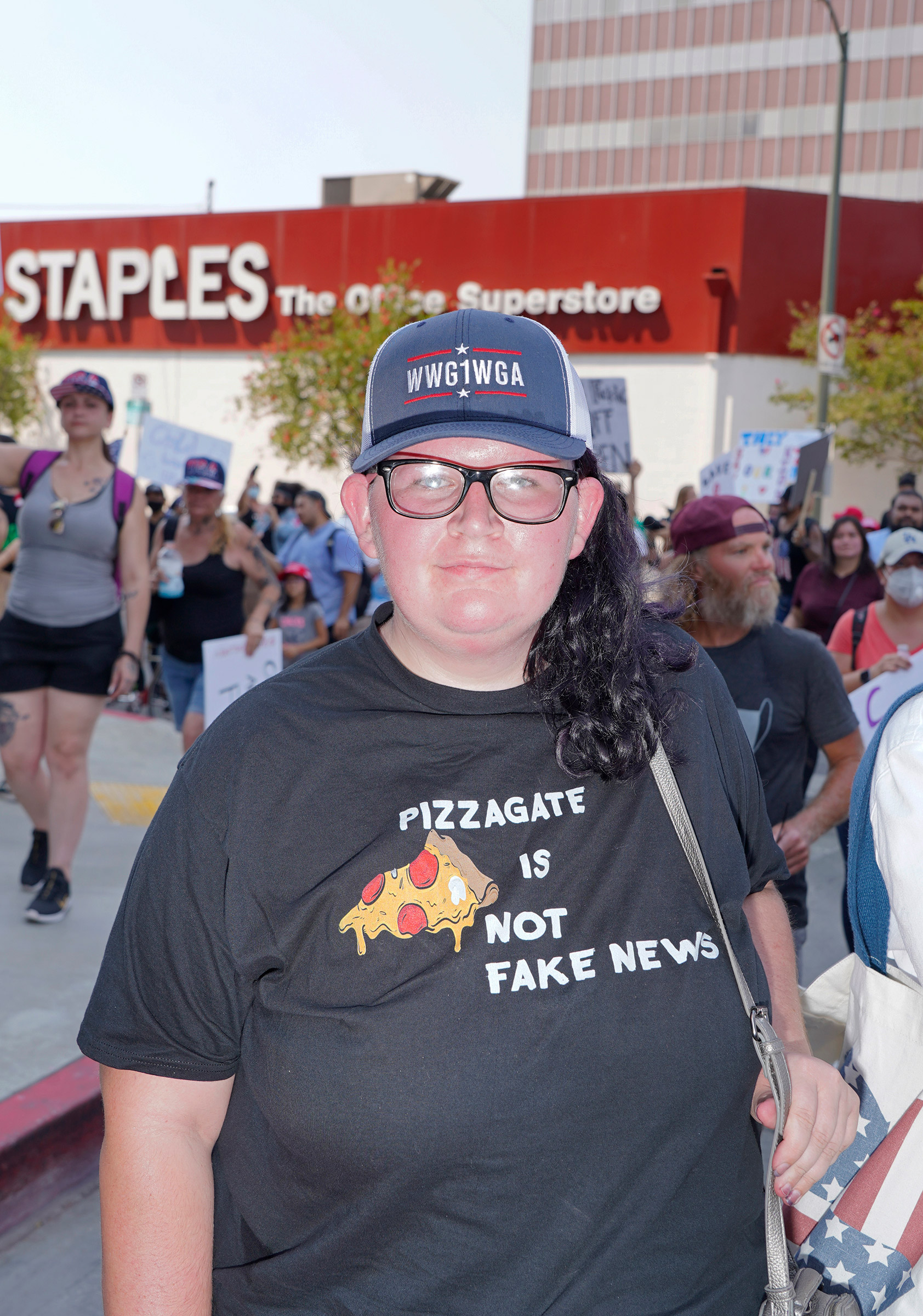 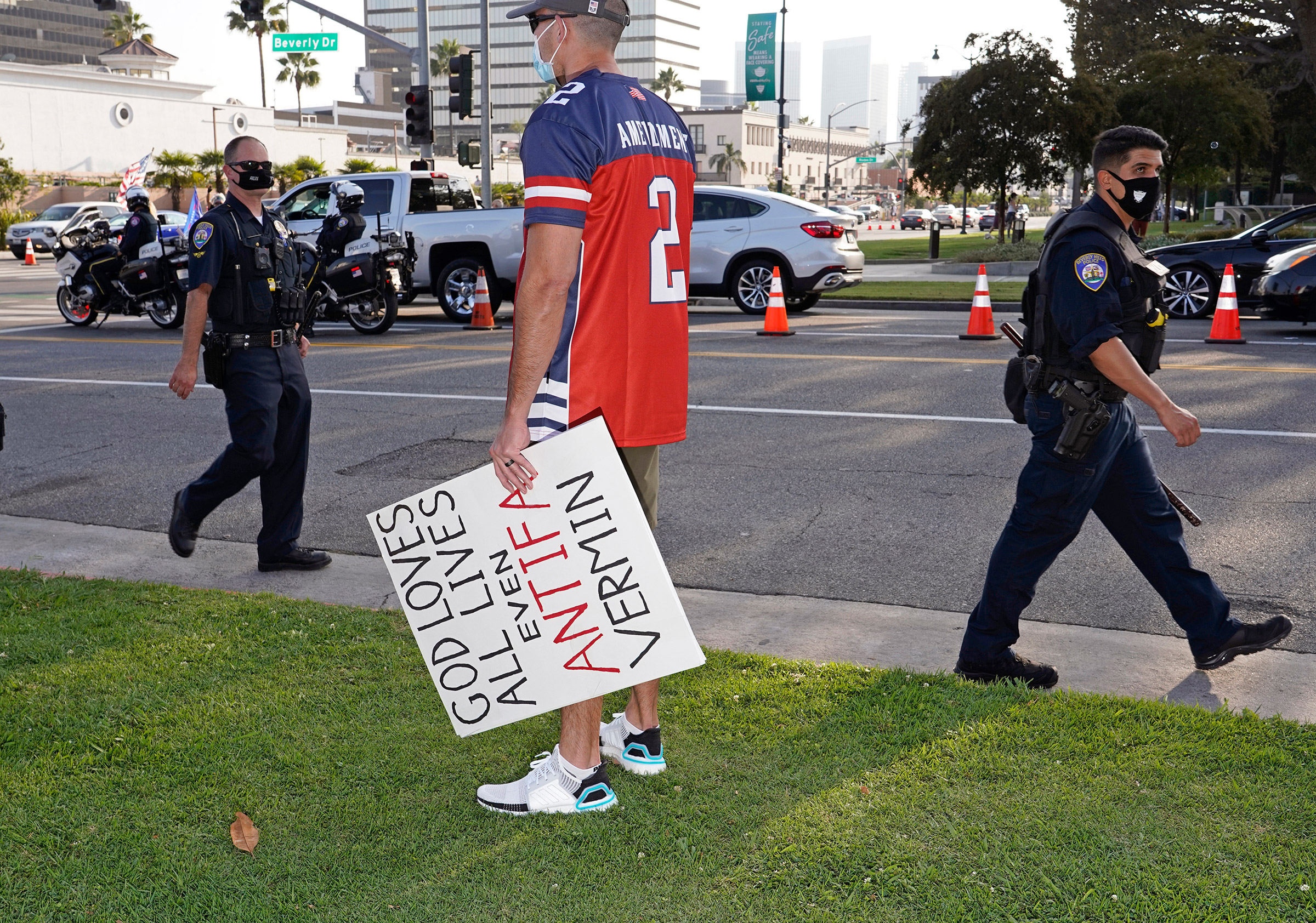 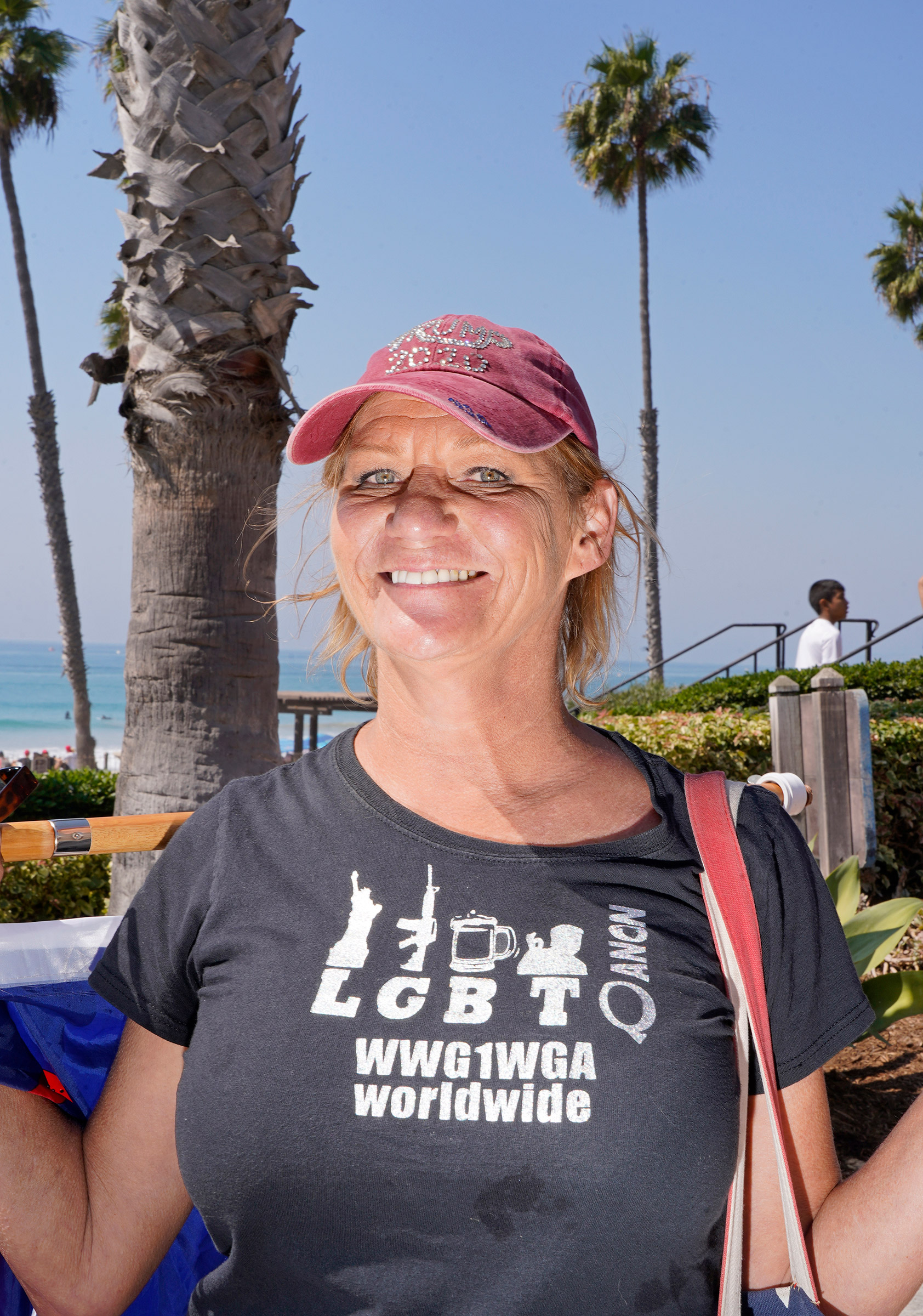 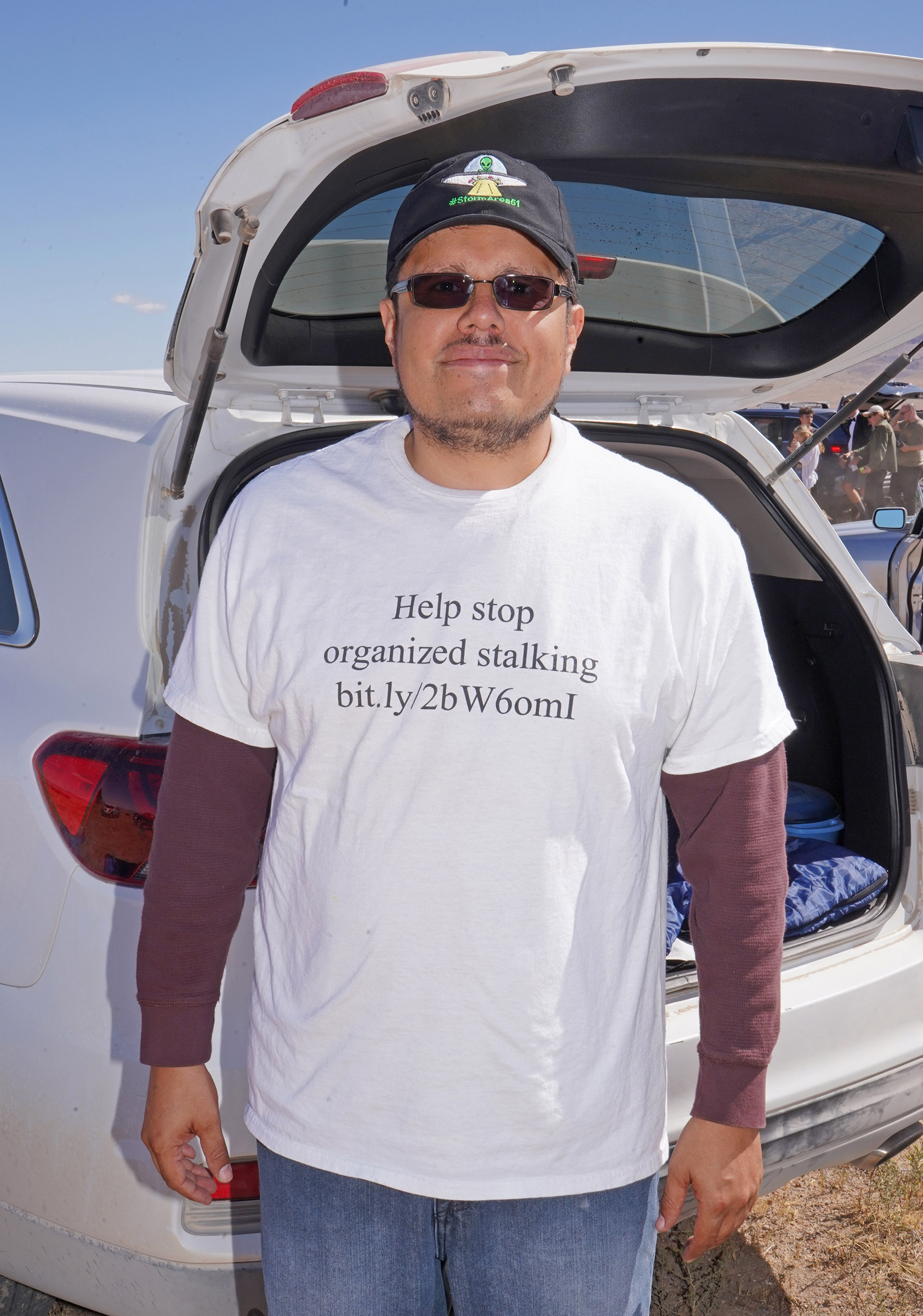 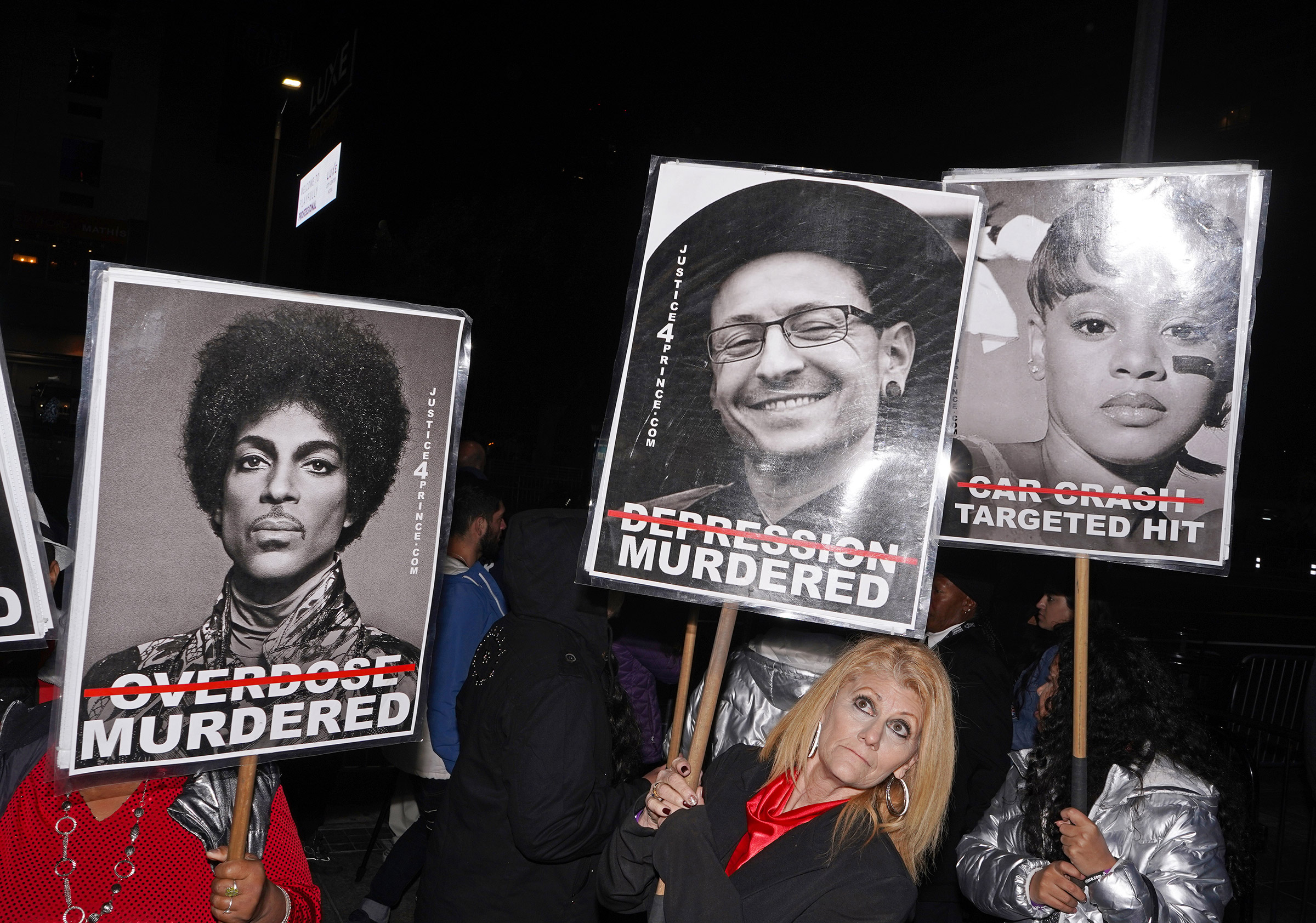 The group Justice 4 Prince protesting outside the Grammy’s in Downtown Los Angeles, Jan. 26, 2020. 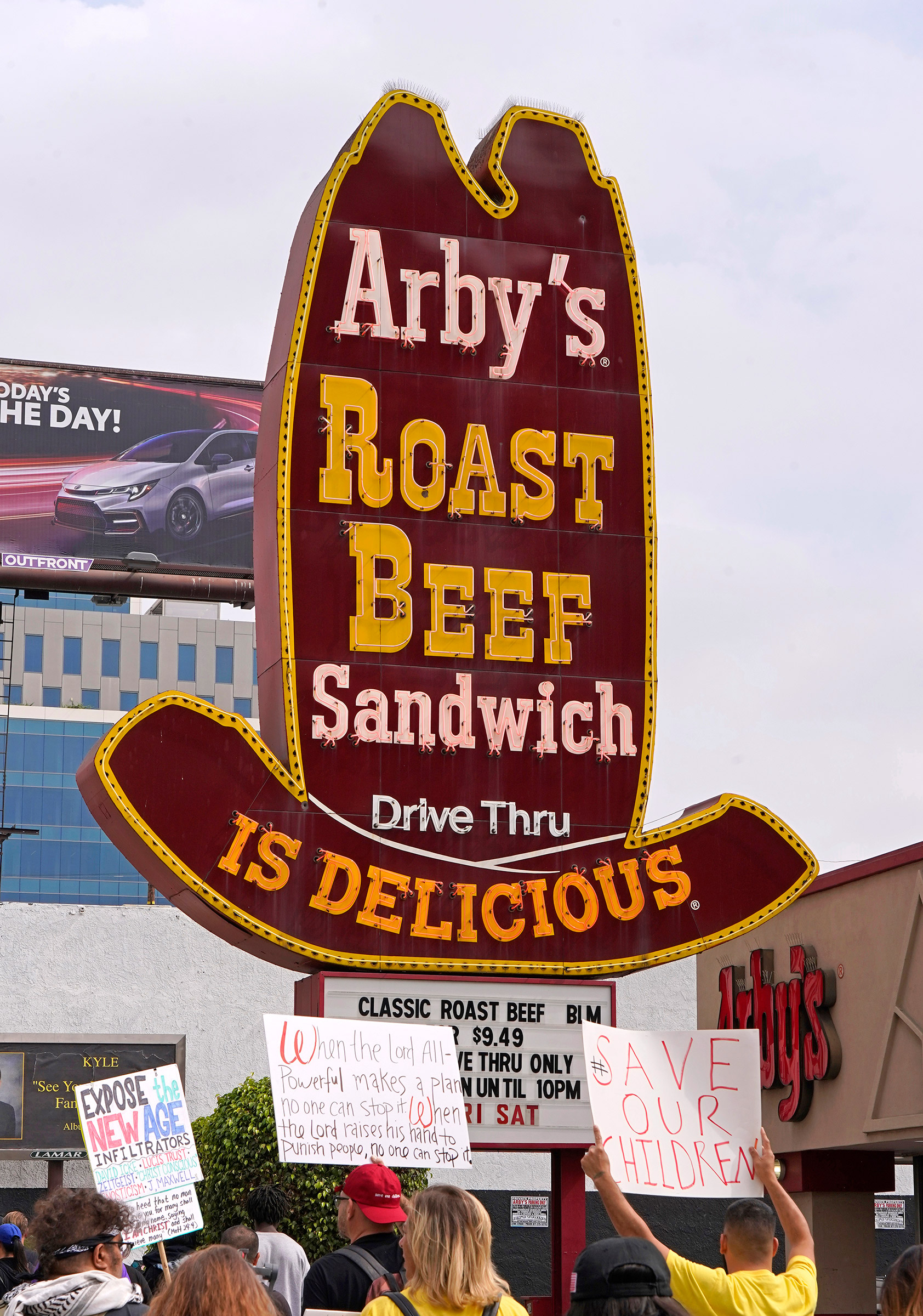 Save Our Children protesters walk past an Arby’s restaurant in Los Angeles, Oct. 10, 2020. 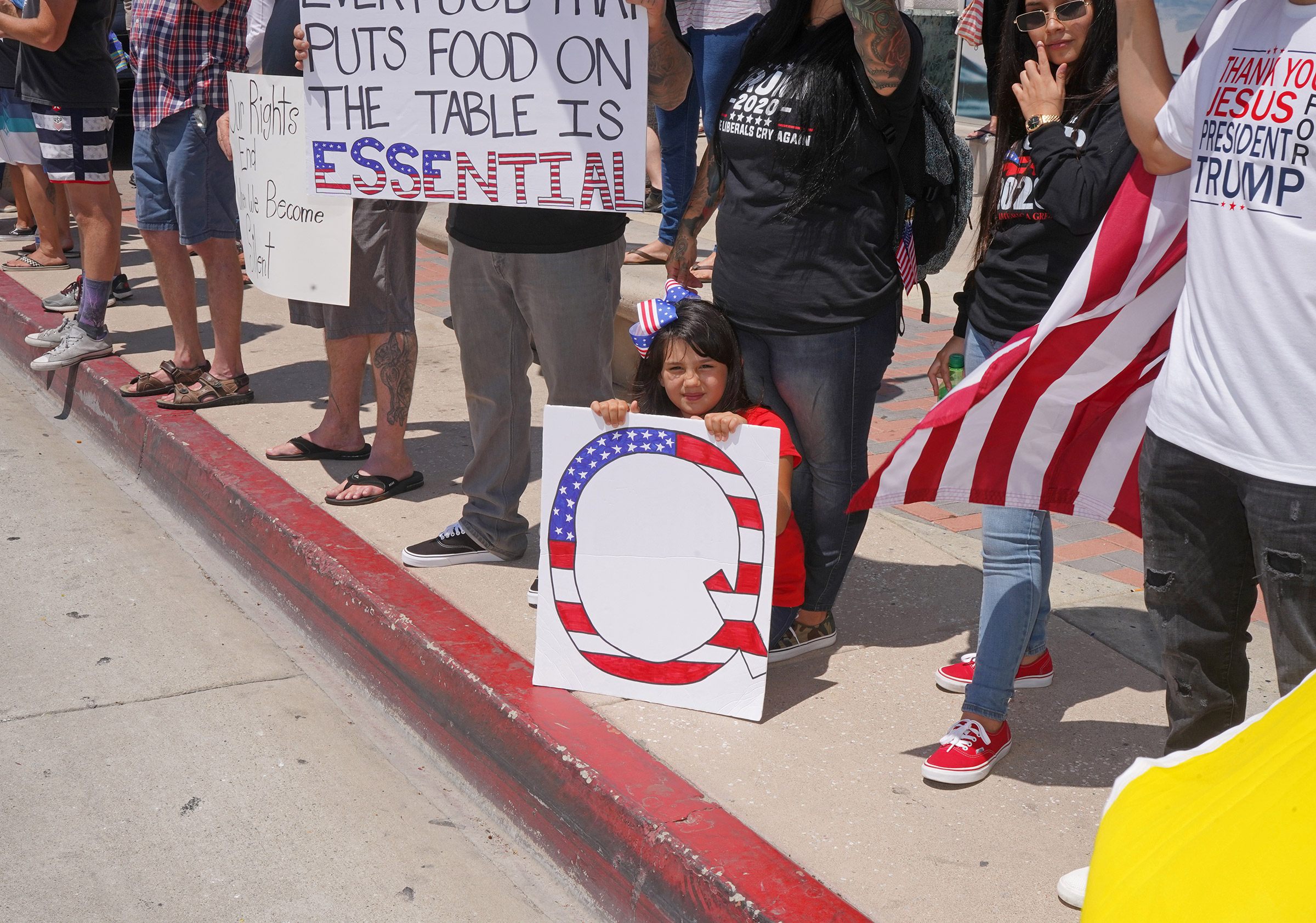 A child with a QAnon sign at an anti-lockdown rally in Huntington Beach, Calif., May 1, 2020.

Sign up for Inside TIME. Be the first to see the new cover of TIME and get our most compelling stories delivered straight to your inbox.

How Well Do You Remember “The Haunted Mansion”?