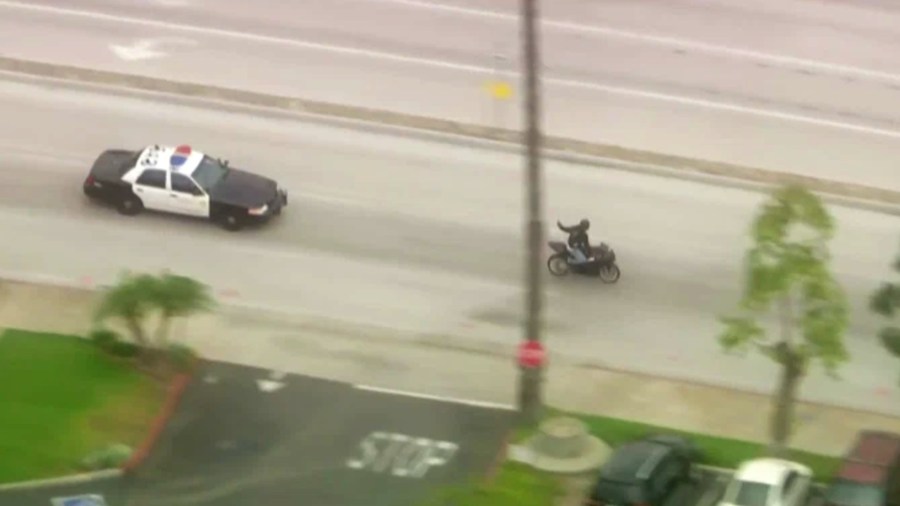 Authorities were in pursuit of a motorcyclist wanted for speeding, reckless driving and possible DUI in the San Gabriel Valley area on Monday, authorities said.

The motorcycle rider could be seen traveling at high speed on surface streets when Sky5 first got over the chase in West Covina around noon, aerial video showed.

It was unclear when exactly the pursuit began, but the Los Angeles County Sheriff’s Department told KTLA the motorcyclist was being sought for reckless driving and possible DUI, while a California Highway Patrol official said the initial want was speeding.

Around 11:10 a.m., law enforcement stopped chasing the motorcycle on the ground because the vehicle was going around 80 mph, according to a Norwalk Sheriff’s Station spokesperson.

But video from Sky5 later showed at least one patrol unit behind the motorcycle again, and aerial units were monitoring overhead.

The rider could be seen driving dangerously and erratically, traveling on a city sidewalk at one point and appearing to drive well-above the posted speed limits; the rider also made gestures with his arms and tossed a bag onto a residential driveway.

Around 12:10 p.m., the rider stopped at a gas station in Baldwin Park, grabbed the nozzle from a motorist and proceeded to put some gasoline into the tank.

A short time later, the motorcycle entered the 10 Freeway and then hopped on to the 605 Freeway.

The motorcycle drove around on roads for a bit before getting back onto the freeway and exiting in Pasadena shortly before 12:30 p.m.

‘Grateful that I got what I deserved’: Student, denied diploma after draping Mexican flag over gown, gets award 4 days later