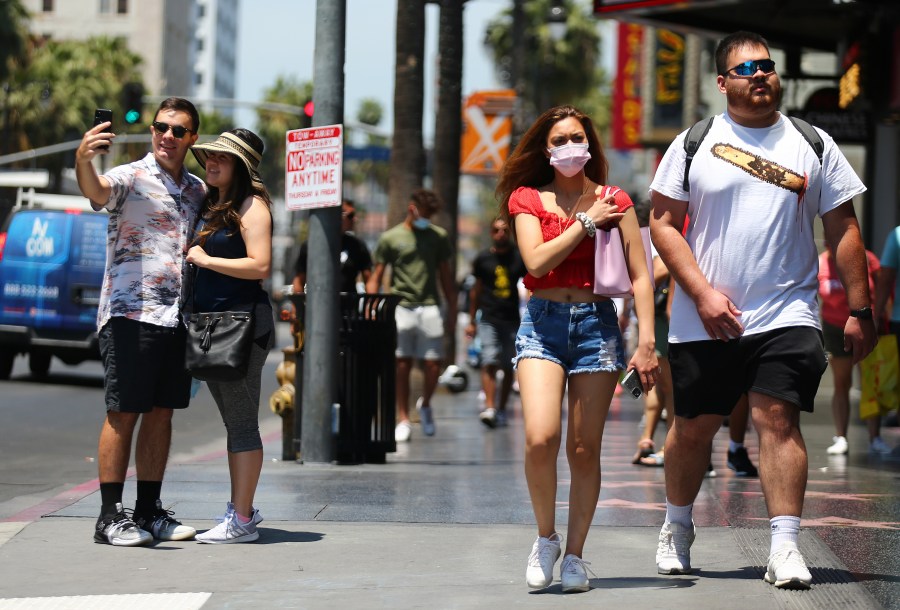 California broadly reopened its economy barely two weeks ago and since then an especially contagious coronavirus variant has spread among the unvaccinated, a development that has health officials on edge and already has prompted Los Angeles County to strongly recommend everyone resume wearing masks inside.

The nation’s most populous state is averaging close to 1,000 additional cases reported daily, an increase of about 17% in the last 14 days. Officials expected an increase when capacity limits were lifted for businesses and most mask restrictions and social distancing requirements were eliminated for vaccinated people.

But public health officials raised concern this week with the more transmissible delta variant spreading among the unvaccinated, who comprise the vast majority of new infections. LA County, where a quarter of the state’s nearly 40 million people live, recommended Monday that vaccinated residents resume wearing face coverings indoors after detecting that about half of all cases were the delta variant.

“The new wrinkle in this is really this new variant. It just sort of rips very quickly through people who are susceptible to being infected, which overwhelmingly is people who are not vaccinated,” said Kirsten Bibbins-Domingo, professor of epidemiology at the University of California, San Francisco. “We just opened up two weeks ago, everything was hunky dory.”

Gov. Gavin Newsom lifted a series of pandemic-related restrictions on June 15 after a final push to get more people vaccinated. Everyone 12 and older is eligible for shots and among that population 59% is fully vaccinated and another 10% has received a first dose.

“The overall numbers don’t look that concerning, but we know that there’s this population that hasn’t been vaccinated that still is at very high risk, and those overall numbers can give a false sense of security thinking COVID is still under control where it’s still spreading quite rapidly among the unvaccinated population,” Farnitano said.

In Los Angeles, a mix of masked and unmasked people walked around Echo Park Lake on Wednesday. G. Williams, who waited for a bus nearby, wore a black cloth mask over a blue surgical one — something she expects she’ll do for years to come.

The 69-year-old isn’t vaccinated, saying she still has concerns about possible long-term side effects. She supports her county’s latest recommendation and said she doesn’t understand why people wouldn’t wear a mask to protect others.

“To me, my mask is as important as any article of clothing,” she said.

At Raven Things Collected, an LA gift shop selling crystals, tarot cards and jewelry, a table full of merchandise has been pulled in front of the counter to keep everyone distanced.

Employee Yesenia Rego said she feels protected because she’s vaccinated and distanced from customers. Most people wear masks when they come in anyway, she said, adding those who don’t rarely ask if they should.

“They don’t even care anymore,” said Rego, 23, who wore a green cloth mask.

Vaccination rates vary widely across California. A San Francisco ZIP code reports more than 95% of those eligible are fully inoculated, while one in rural Modoc County has a 37% rate, according to state data.

Health officials said areas with low vaccination rates are especially at risk as the delta variant, first reported in India, spreads across the United States. The variant — which accounts for a fifth of new U.S. infections — was found in 15% of specimens sequenced in California in June, up from 5% in May.

In Orange County, the variant accounts for 45% of sequenced cases in the most recent week, said Dr. Regina Chinsio-Kwong, the county’s deputy health officer. Contact tracers reaching out to those infected with the virus find 95% are unvaccinated, and the few who are vaccinated report minor symptoms and aren’t hospitalized, she said.

“Because we’re starting to see these highly transmissible strains, it is only a matter of time for us to be exposed again,” she said. “So the question is how severe is the illness going to be when you actually get COVID.”

Public health officials said they hope measures like the one taken by Contra Costa County might help encourage more people to get the shots.

“It’s a demonstration in the real world, outside of the clinical trials, of the power of the vaccine,” said Andrew Noymer, a public health professor at University of California, Irvine. “COVID is going to seek out unvaccinated populations. The virus has a way of just sort of bouncing around until it finds a host it can infect, and those will be unvaccinated people.”