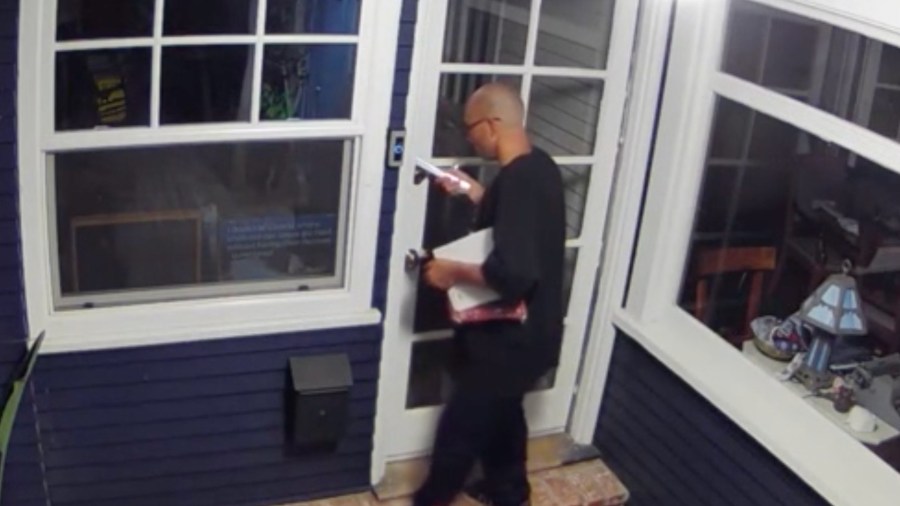 A convicted felon who was caught on security video trying to break into a Van Nuys home last week proceeded to trespass into another nearby home the same night.

Robert Hemingway, who was out of town, watched security cameras from his cellphone as a man tried to get into his house last Wednesday, while his wife was home alone.

“As soon as I saw him prying with the knife, I told her she needed to call 911,” Hemingway said to KTLA.

The Los Angeles Police Department responded, but Hemingway says officers told his wife that even with video evidence, they didn’t have enough to arrest the intruder.

The victims say police promised to take man, later identified as 31-year-old Gage Roth, to the hospital for evaluation. But 15 minutes later, Hemingway’s wife said she saw him back on Vesper Street.

“The lead officer said, well, he didn’t break enough of the rules here, so we got to let him go. So off he went,” Hemingway said.

Hours later, less than a mile away, Roth allegedly broke into a Vose Street apartment. He then took off his clothes and entered a bedroom where twin 12-year-old girls were sleeping.

“Then he gets in a huge fight with the family,” Hemingway explained. “A son had to watch the father in a serious brawl, and they held him down until the cops showed up.”

Police then arrested Roth — who has 42 previous arrests in L.A. County — on suspicion of residential burglary.

“That family would have never had that happen,” Hemingway said. “They got two teenage kids and they’re almost certainly going to need some counseling. That’s not fair, not at all.”

Roth remained behind bars Tuesday night, county booking records showed, and his first appearance before a judge has not yet been scheduled.

Fully vaccinated veteran hospitalized after being diagnosed with Delta variant

The Latest: Sri Lanka gives Pfizer shots to some as 2nd dose