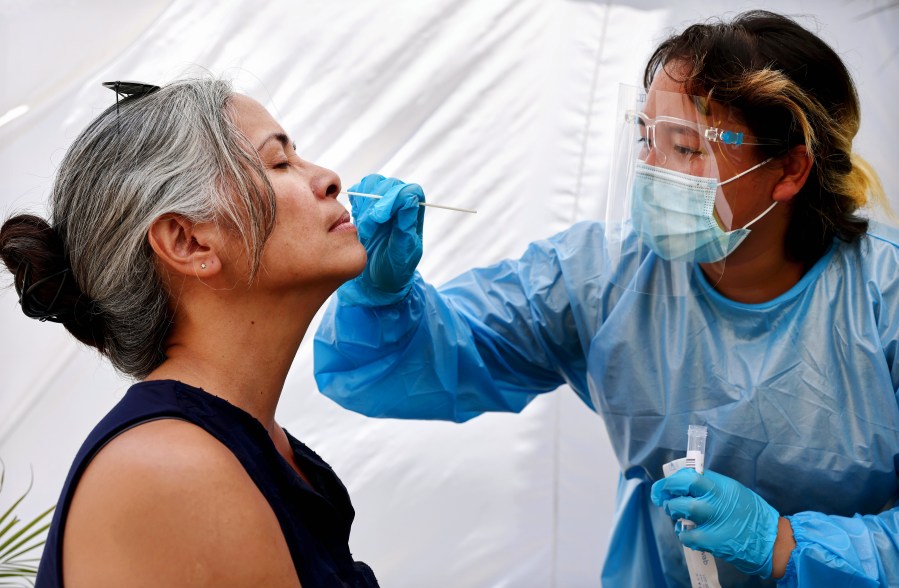 Fully vaccinated people in Los Angeles County appear to be just as protected against infection from the highly contagious delta variant as they are from other versions of the coronavirus, public health officials said Thursday.

The delta variant is infecting fully vaccinated people at a slightly higher rate than other coronavirus variants, but it’s also the most prevalent version of the virus in the county. Plus, the illness is still largely spreading among the unvaccinated, L.A. County Health Officer Dr. Muntu Davis said in a media briefing.

That compares to fully vaccinated people making up 9% of alpha variant cases, 8% of gamma variant infections and 11% of all other variant cases. That data comes from virus samples sequenced during the month of June.

“The differences among these percentages are still too small to be statistically significant and do not suggest large differences in the risk these variants pose in terms of fully vaccinated people,” Davis said.

Davis noted that fully vaccinated people are also more likely to have their specimen sequenced than those who are unvaccinated, meaning their share of cases could appear larger than it really is.

But officials have also seen positive tests among fully vaccinated people jump 46% over the past week, Davis said.

A total of 4,122 fully vaccinated people have now tested positive for the virus in L.A. County, or 0.09% of all vaccinated people. That’s up from 2,800 so-called breakthrough cases last week.

Davis said officials will monitor the rising cases among inoculated residents, but “at this point, I don’t make a lot of what we’re seeing in terms of fully vaccinated people”

Fears over the spread of the delta variant — which has been the most prominent in L.A. County since early June — prompted county public health officials to order everyone to wear masks in indoor public spaces again starting Saturday.

The county has seen a surge in cases this week, with single-day increases reaching levels not seen since March and several consecutive days with more than 1,000 new infections.

The best protection against the virus’ spread remains vaccination, but Davis said he’s disappointed that “overall vaccination numbers are lower than we need them to be.”

As of Thursday more than 5 million L.A. County residents were fully vaccinated, or 61% of all residents 16 and older. But fewer and fewer people are coming in to get their first shot each week, Davis said.