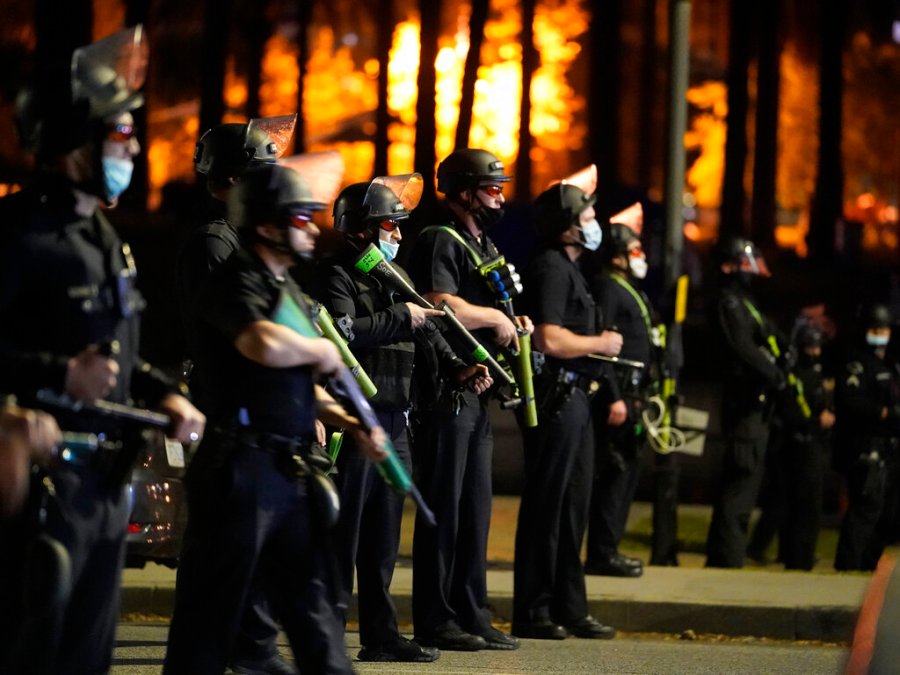 The remaining homeless people living along Echo Park Lake were given 24 hours to leave their encampment after protesters clashed with police Wednesday night.

A heavy police presence was still in place on Glendale Boulevard and Park Avenue Thursday morning as a fence was put up to close off the park.

Roughly 30 to 40 tents could still be seen scattered behind the fencing but the people living in those tents were told they would have to leave.

“No one else may enter. 24 hr notice for those in the park to leave. Housing resources are being provided to everyone,” Los Angeles Police Chief Michel Moore said shortly before midnight Wednesday.

Police attempting to clear the encampment Wednesday night were met by several hundred protesters who believe it is wrong to move the homeless out of Echo Park.

The LAPD later declared two unlawful assemblies and gave an order to disperse from Santa Ynez Street and Glendale Boulevard. Police said officers were being assaulted with rocks, bottles and smoke bombs.

Some pushing and shoving was seen on video between police and protesters as smoke filled the air but it was unclear if any arrests were made.

At least one person was seen in handcuffs amid the skirmishes.

Earlier in the day, the homeless living in the park held a prayer session and said they should have been given more notice about plans to clear the park.

Jesse Mendez described the park as a “safe haven” and said it is one of the cleanest, most well-kept and safest places there is for those, who like herself, are currently experiencing homelessness.

“The pandemic has not even been lifted and they’re trying to evacuate people who have nothing anymore,” Mendez said.

In the days leading up to the confrontation, city workers started posting signs that those living in the park would need to pack up their belongings and leave.

Neighbors have complained about drug use, crime and trash from the 200 plus tents surrounding Echo Park Lake.

An online petition on Change.org titled “Save Echo Park Lake” describes the park as “virtually unusable” and states it is “becoming Skid Row.” It calls on city officials to “restore the lake and build housing.”

City Councilmember Mitch O’Farrell said in a statement that the park’s closure will allow for repairs to lighting, plumbing and other much-needed improvements.

O’Farrell also said his office has been working for months to find housing for individuals at the park. More than 120 people have been successfully moved into transitional housing, O’Farrell’s statement read.

Freelance journalist Sean Edwards posted images to Twitter showing dozens of people gathered outside O’Farrell’s Echo Park office to voice their disapproval of his actions. On social media, the hashtag #EchoParkRiseUp has circulated with calls to action, photos of protests and notifications to the public about plans to sweep the park.

As of Thursday morning, the protesters had mostly left Echo Park.

Social workers are expected to go through the park sometime during the day and offer people still behind the fence another place to stay.