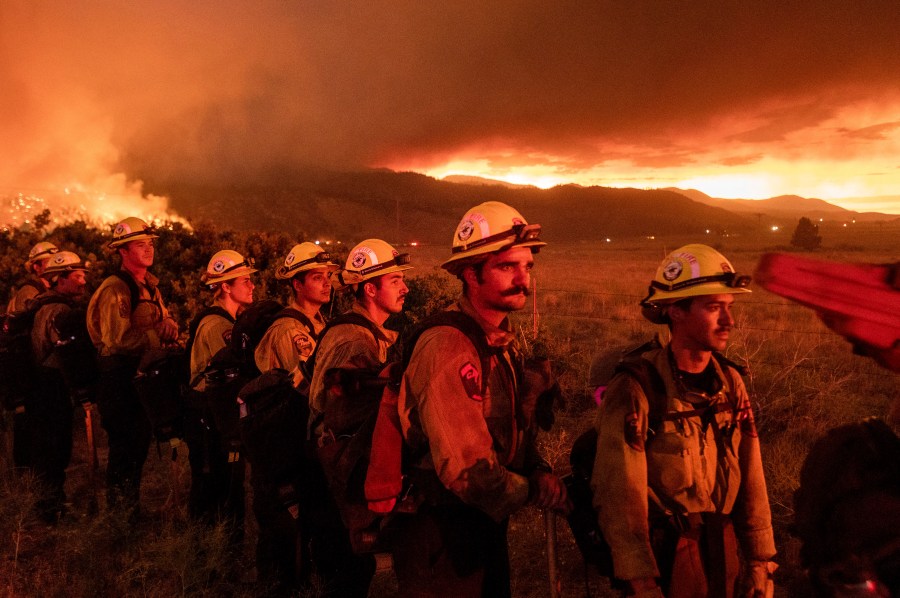 Firefighters struggled to contain an exploding Northern California wildfire under blazing temperatures as another heat wave hits the U.S. West this weekend, prompting an excessive heat warning for inland and desert areas.

On Friday, Death Valley National Park in California recorded a staggering high of 130 degrees Fahrenheit (54 Celsius) and could reach the same high on Saturday. If verified, the 130-degree reading would be the hottest high recorded there since July 1913, when the same Furnace Creek desert area hit 134 F (57 C), considered the highest reliably measured temperature on Earth.

The Beckwourth Complex — a merging of two lightning-caused fires — headed into Saturday showing no sign of slowing its rush northeast from the Sierra Nevada forest region after doubling in size only a few days earlier.

California’s northern mountain areas already have seen several large fires that have destroyed more than a dozen homes. Although there are no confirmed reports of building damage, the fire prompted evacuation orders or warnings for roughly 2,800 people in California along with the closure of nearly 200 square miles (518 square kilometers) of Plumas National Forest.

On Friday, ridgetop winds up to 20 mph (32 kph) combined with ferocious heat as the fire raged through dry pine, fir and chaparral. As the fire’s northeastern flank raged near the California-Nevada state line, the Washoe County Sheriff’s Office asked people to evacuate some areas in the rural communities of Ranch Haven and Flanagan Flats, north of Reno.

The evacuation orders were lifted Saturday, but authorities urged residents to be ready to leave if the fire becomes a threat again.

Spot fires caused by embers leapt up to a mile (1.6 kilometers) ahead of the northeastern flank — too far for firefighters to safely battle, and winds funneled the fire up draws and canyons full of dry fuel, where “it can actually pick up speed,” Cox said.

Firefighters usually take advantage of cooler, more humid nights to advance on a fire, Cox said, but the daytime conditions persisted. More than 1,200 firefighters were aided by aircraft but the blaze was expected to continue forging ahead because of the heat and low humidity that dried out vegetation.

The air was so dry that some of the water dropped by aircraft evaporated before reaching the ground, she added.

The blaze, which was only 9% contained, increased dramatically to 86 square miles (223 square kilometers) after fire officials made better observations.

It was one of several threatening homes across Western states that are expected to see triple-digit heat through the weekend as a high-pressure zone blankets the region.

The National Weather Service warned the dangerous conditions could cause heat-related illnesses, while California’s power grid operator issued a statewide Flex Alert from 4 p.m. to 9 p.m. Saturday to avoid disruptions and rolling blackouts.

The call for voluntary conservation of electricity was extended for a second day, not only because of mounting heat, but because a wildfire in southern Oregon was threatening transmission lines that carry power to California. Gov. Gavin Newsom issued an emergency proclamation on Friday suspending some rules to allow for more power capacity.

Pushed by strong winds, the Oregon fire doubled in size to 120 square miles (311 square kilometers) on Saturday as it raced through heavy timber in the Fremont-Winema National Forest near the Klamath County town of Sprague River.

In north-central Arizona, Yavapai County on Saturday lifted a pre-evacuation notice for Black Canyon City, an unincorporated town 43 miles (66 kilometers) north of Phoenix, after a fire in nearby mountains was less active Friday.

Fire crews in north-central Idaho were facing extreme conditions and gusts as they fought two wildfires covering a combined 19.5 square miles (50.5 square kilometers). The blazes threatened homes and forced evacuations in the tiny, remote community of Dixie about 40 miles (64 kilometers) southeast of Grangeville.