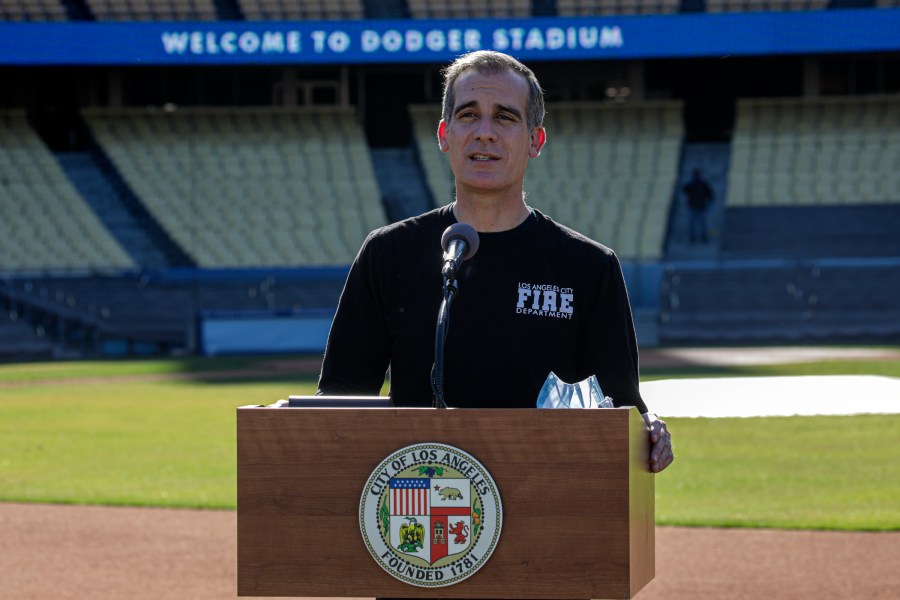 With some 63,000 coronavirus vaccine doses bound for Los Angeles stuck in southeastern states due to freezing weather across most of the U.S., vaccination sites run by the city of L.A. won’t be able to inoculate thousands of people who had appointments this week.

About 12,500 vaccine appointments originally set for Friday are being postponed due to the grounded flights and icy roads causing delivery delays, according to a news release from Mayor Eric Garcetti’s office.

Those whose appointments are impacted will be notified by text, email or phone, officials said Thursday afternoon.

Additional appointments scheduled for Saturday may also have to be postponed, and the city said it would make a determination as soon as possible.

It’s unclear when the appointments will be able to be rescheduled, as the city has yet to confirm when new shipments will arrive.

But once more doses become available, those who had their appointment postpone will be first in line. Their appointments will be automatically rescheduled, and they’ll receive a notification with the details, according to the mayor’s office.

The shortage affects all five of the city’s inoculation centers, including the Dodger Stadium site. But the city will continue operating mobile clinics meant to target areas hardest hit by the pandemic.

As of Thursday afternoon, health officials for L.A. County had not indicated the delivery delays will impact their vaccine distribution.

Southern California is one of the few areas nationwide not experiencing harsh weather conditions, but it’s still feeling the impacts.

Orange County also had to temporarily close its mass vaccination site at Disneyland due to shipping delays. The storm will also force some San Diego County vaccination clinics to “pause” this week, the San Diego Union-Tribune reported.

Garcetti vowed swift distribution once the vaccines do arrive.

“Severe weather across the country has disrupted travel and shipping nationwide, including delaying the delivery of our vaccines,” he said in a written statement. “Our City is ready to administer COVID-19 vaccines swiftly, safely, and equitably — and as soon as doses arrive in Los Angeles, we will get them into people’s arms immediately.”

The shipments still en route to L.A. include 26,000 doses held up in Kentucky that had been expected to arrive Tuesday, and another 37,000 doses meant for next week’s appointments sitting in Tennessee.

Officials did not say if it’s possible some of next week’s appointments could be affected.

Dana Perino: A Lenten reflection and five ways to bring serenity and joy this season