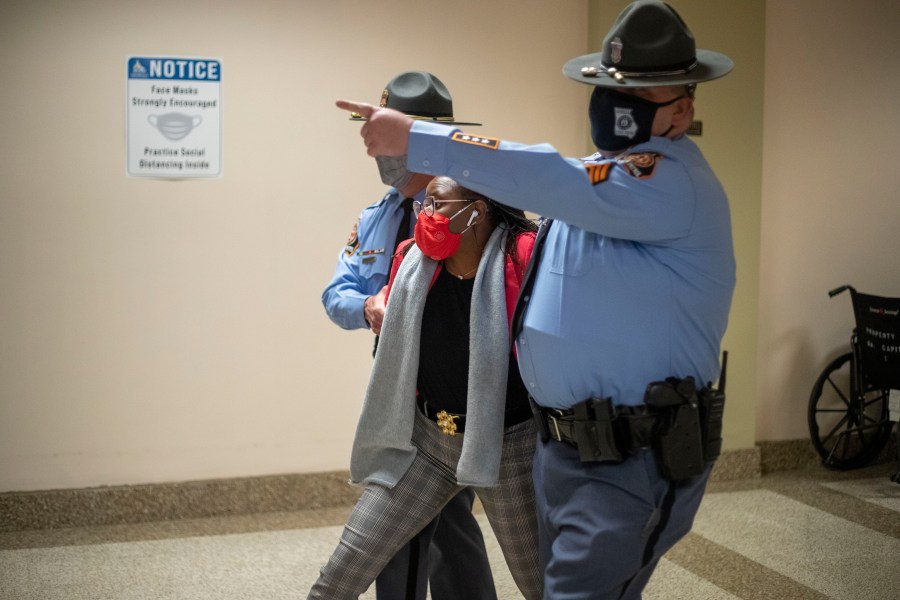 An attorney for a Georgia lawmaker who was charged with two felonies after knocking on the door to the governor’s private office said authorities overreached in the case, which unfolded while the governor spoke on live television about a sweeping overhaul of state elections.

Cannon was charged with obstruction of law enforcement and disruption of the General Assembly. She was released from jail late Thursday.

A state police spokesman said Cannon knocked on the door to the public lobby of the governor’s office, and then shifted to knocking on a door to a private area.

“She was advised that she was disturbing what was going on inside and if she did not stop, she would be placed under arrest,” Lt. W. Mark Riley wrote in a statement.

Kemp signed the bill before he began speaking. He interrupted his televised remarks while Cannon was knocking and later resumed the speech.

“This was a law enforcement overreach on all the charges, and my hope is that after examining the file, the district attorney will dismiss the charges,” Cannon’s lawyer, Gerald Griggs, said Friday. Griggs said he had already spoken to Fulton County District Attorney Fani Willis.

The new law requires a photo identification to vote absentee by mail. It also shortens how long voters have to request an absentee ballot and limits where ballot drop boxes can be placed and when they can be used. Republicans said Georgia needed to restore the confidence of voters who believed President Donald Trump’s baseless claims of widespread fraud. They also noted that the law increases the number of in-person early voting days on weekends.

Democrats say the law is a power grab by Republicans who are threatened by Joe Biden’s presidential victory in Georgia in November and the twin Democratic victories of U.S. Sens. Raphael Warnock and John Ossoff in January.

Three voter-mobilization groups sued late Thursday to block the law, alleging that it violates the First and 14th Amendments of the U.S. Constitution and illegally hurts Black voters under the federal Voting Rights Act.

Georgia’s constitution says lawmakers “shall be free from arrest” during meetings of the General Assembly “except for treason, felony, or breach of the peace.”

Griggs questioned whether felony charges, with mandatory prison terms, were merited. A warrant claims Cannon resisted arrest by stomping on an officer’s feet, but Griggs said he’s seen no video supporting that accusation.

Griggs questioned whether the felony charge for disruption of the General Assembly could be applied because first and second offenses are misdemeanors, while only third and later offenses are felonies. Cannon has never been charged or convicted under that law before, Griggs said.

The law against disrupting a legislative meeting was challenged as unconstitutional in a lawsuit filed last year after people including Nikema Williams, then a state senator and now a U.S. representative, were arrested at the Capitol while protesting election results in 2018. All charges were dismissed in 2019.

Cannon had another run-in with officers in February. She and others held a two-hour sit-in on a Capitol stairway after Cannon said it was improper that a police officer led her away while Democrats were protesting voting bills. Cannon put her ear up to the bullhorn of an officer ordering protesters to disperse and then demanded an apology from another officer who moved her away.

Warnock said Cannon is a member of Ebenezer Baptist Church, where he is the pastor, and he visited her inside the jail before her release.