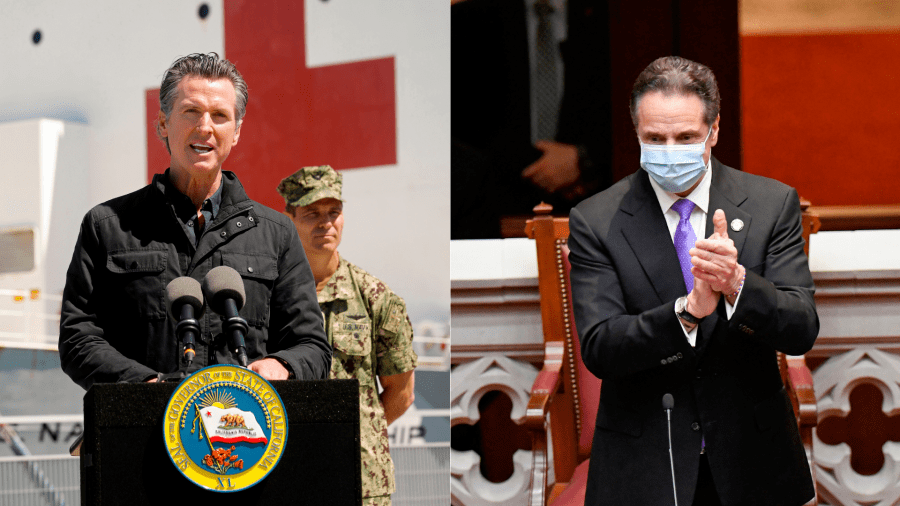 At the outset of the coronavirus pandemic, two Democratic governors on opposite ends of the country were hailed as heroes for their leadership in a crisis. Now they’re leaders on the ropes.

Andrew Cuomo of New York and Gavin Newsom of California are embroiled in distinct political woes. For Cuomo, it’s a federal investigation into whether his administration sought to hide the true toll of the pandemic. For Newsom, it’s fending off a recall effort fueled by opposition to his lockdowns — and his own personal missteps.

But for both men the bottom line is clear: If you’re not careful, the same crisis that can raise your stock can just as easily bring you down.

“We’ve had too many mission accomplished moments,” said Rebecca Katz, a New York City-based Democratic strategist who ran a primary challenge against Cuomo in 2018, in a reference to former President George W. Bush’s premature boast days after the conquest of Iraq.

The COVID-19 virus has been an especially painful illustration of that point. The virus is now stretching into its second year, a timeline few could have comprehended when schools and workplaces were first shuttered last March and governors who control lockdowns played newly prominent roles in Americans’ lives.

Cuomo and Newsom both seized the moment in their own ways. Cuomo went on television for daily briefings that were paternal, almost philosophical, and also sharply critical of the Trump administration. They became must-see TV across the country, aided in part by his CNN news host brother. Newsom, meanwhile, instituted early lockdowns, and for a time his state avoided the worst of the virus. He was a smoother, reassuring presence. He studiously avoided partisanship, even landing himself in an ad for President Donald Trump.

But ultimately it was their actions, not their tone or words, that brought them down to earth.

“This is all a bunch of tough stuff,” said California strategist Rob Stutzman, noting that governors are judged on outcomes and the outcomes in this crisis have been bad everywhere. “At the end of the day, these different approaches the governors have taken have made very little difference because, well, it’s a virus.”

Several governors have managed to avoid major political backlash, like Republican Charlie Baker in Massachusetts or Democrat Jared Polis in Colorado. But the travails of Cuomo and Newsom show how big states are exceptionally tricky to run and always under the microscope — something also demonstrated this week in Texas, as the nation’s second-largest state suffered extended power outages during a deep freeze that sparked criticism of its Republican governor, Greg Abbott.

“New York and California are under a magnifying glass,” said Jared Leopold, former spokesman for the Democratic Governors Association. “Everything good that happens there looks five times better and everything bad looks five times worse.”

While the coronavirus may have first landed on U.S. soil on the West Coast, it exploded into public consciousness in March as New York City was wracked by a hideous outbreak. As the epidemic spiraled, Cuomo on March 25 issued a directive barring nursing homes from refusing patients based solely on a COVID-19 diagnosis. Cuomo defended the directive as an effort to prevent catastrophic hospital overcrowding and discrimination against virus patients.

Despite his state’s death toll — more than 46,000 people in New York state have died of COVID-19, according to Johns Hopkins University — Cuomo’s popularity soared, and some Democrats in the spring and summer favorably contrasted his response with Trump’s bravado and false optimism, wondering if Cuomo could replace Joe Biden on their ticket or sign on as a vice presidential candidate. In October, Cuomo took an early victory lap, releasing a book titled “American Crisis: Leadership Lessons from the COVID-19 Pandemic.”

But the nursing home issue exploded onto the political scene with two recent revelations. First, the state’s Democratic attorney general chastised the Cuomo administration for minimizing the death toll at nursing homes by excluding certain fatalities from the count. Cuomo’s administration then revealed at least 15,000 people living in long-term care facilities have died of COVID-19, nearly double the number Cuomo had initially disclosed.

The New York Post reported that a member of Cuomo’s administration told lawmakers it had withheld the numbers for fear of them being “used against us.” A furious Cuomo at a press conference accused Ron Kim, a Democratic state legislator who spoke to the Post, of corruption.

Kim said Cuomo had called him and threatened to “destroy” him.

“The nursing homes story really exposed quite a bit about questions about his leadership style and the success of his leadership during COVID,” said Christina Greer, a political science professor at Fordham University. “The governor wrote a book touting his accomplishments, and we don’t know if we’re halfway out of the pandemic.”

The meltdown in California has been more gradual. A month after Cuomo released his coronavirus book, an embarrassed Newsom was apologizing for attending a lobbyist’s birthday party at the posh French Laundry restaurant, even as he was telling Californians to avoid gatherings.

The restaurant scandal came as California’s image as a model of COVID response began to fade. Rising cases and shrinking capacity at hospitals prompted Newsom to reinstate stay-at-home orders between Thanksgiving and Christmas.

Republicans had circulated recall petitions against Newsom months before, complaining about his handling of homelessness and the economy, but they shifted to include his COVID-19 response in their complaints and began racking up signatures.

In January, Newsom abruptly lifted the stay-at-home orders, sparking accusations he was abandoning science. He was then forced to retool the state’s vaccine distribution system. Now the state’s coronavirus numbers are dropping. His job approval rating has also.

Stutzman said Newsom is suffering for failing to provide the smooth, efficient government he promised when elected. But part of his fall, and Cuomo’s, was inevitable because they are no longer being compared to Trump and his often hands-off approach to the virus response.

“Any of these Democratic governors are going to come off these initial highs they got that were better than Republican governors,” Stutzman, a Republican, argued. “Democrats across the country got a false boost out of this because of Trump, but when it all nets out it looks the same.”

The governors’ troubles stand as a warning for Biden, a Democrat who has declared he now owns the pandemic response and will be judged by how he delivers.

“At least the Biden administration got to see how everyone else did first,” Katz said.