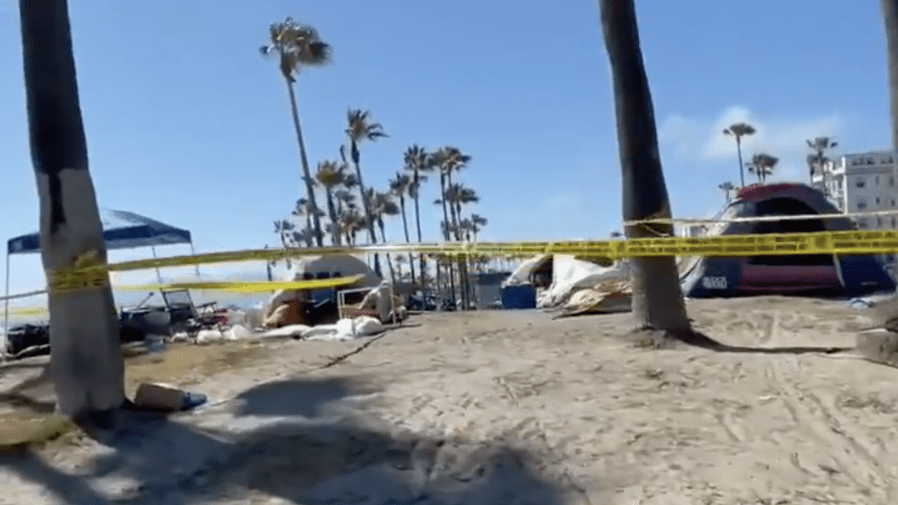 Authorities are investigating after a man was found dead in a tent along the Venice Beach Boardwalk Friday, officials said.

Police were called to the area of Ocean Front Walk and Dudley Avenue at about 3:20 p.m., said Officer William Cooper, a Los Angeles police spokesperson.

Responding officers found a 49-year-old man inside a tent, suffering from blunt force trauma to the head, Cooper said.

Paramedics pronounced the man dead at the scene.

Video posted to social media showed a large section of tents along the beach was taped off for investigation.

The man not been identified as of Friday evening, but Cooper said he may have been living at the beachside encampment that has become a lightning rod for debate in recent weeks.

Earlier this month, L.A. County Sheriff Alex Villanueva sent his deputies into the boardwalk area — which is in LAPD’s jurisdiction — arguing that city officials aren’t doing enough to combat the growing homelessness crisis at the boardwalk, which he ties to an increase in crime.

Villanueva said his goal was to clear the area of encampments by July 4, but advocates say forcibly removing people won’t address the root issues.

This week, L.A. City Councilmember Mike Bonin — who represents the area — vowed to provide housing and services to relocate up to 200 people without the threat of arrest.

Tucker Carlson: The most sophisticated military in the world has no idea what UFOs are