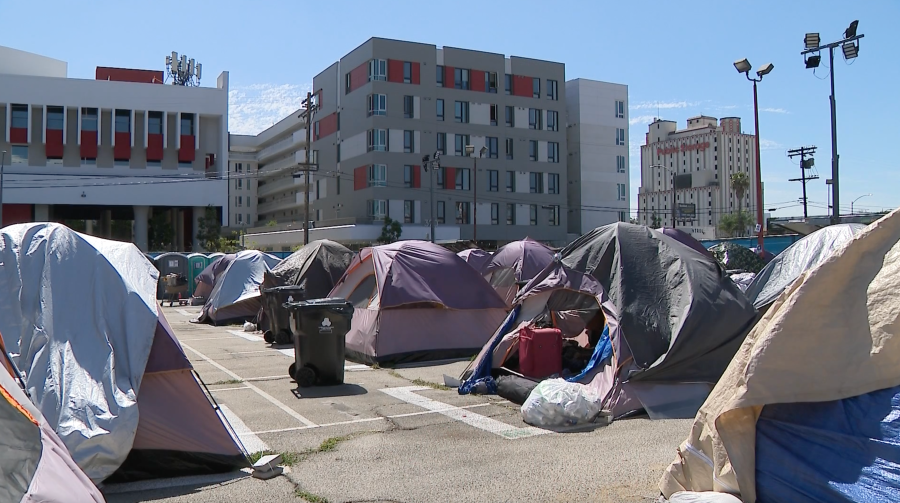 Dozens of tents lining a parking lot in Los Angeles make for a familiar sight in the city where tens of thousands of people remain unhoused, but this homeless encampment in East Hollywood is different.

The site is sanctioned and funded by the city as part of an eight-month pilot program that provides space for up to 69 tents to be pitched in the parking lot. Homeless people who set tents up have access to meals, showers, restrooms and services like counseling.

Dubbed “Safe Sleep Village,” the temporary tent complex at 317 N. Madison Ave. is another of the city’s programs to address one of Los Angeles’ biggest challenges: its growing homelessness crisis. In this case, the program’s price-tag is raising questions.

The site, which opened in April, costs the city around $2,140 per person each month when operating at maximum capacity of 90 residents, according to the office of the City Administrative Officer. There were 72 people staying in the parking lot on June 9.

“It’s incredibly shocking to see the cost of one tent per month is comparable to rent in town,” said Robin Petering, who is a co-chair at homeless advocacy group Ktown for All.

It’s worth it because chronic homelessness without services can cost the city even more, according to Councilman Mitch O’Farrell, who represents East Hollywood.

Safe Sleep Village is meant to give homeless residents a low-barrier pathway to stability that reduces the risks of being homeless and connects them to services, O’Farrell says. The site will ultimately be turned into a permanent supportive housing with hundreds of units.

The city approved up to $1.49 million to establish the tent village, now providing a stepping stone for some who take shelter in their tents in designated 12-by-12-foot areas within the fenced-off camp site.

Brent Hatcher recently traded in his tent in the street a few miles away for a new one at Safe Sleep Village. He still doesn’t have a roof over his head, but says the newfound security makes him comfortable enough to go out to work knowing he won’t return to find his belongings stolen.

“My goal is to go back to work and become a productive citizen … but in the meantime, I’m semi-content with this because I’m secure,” Hatcher said. “I’m so used to living in a tent. As humans, sometimes it’s hard for us to change.”

The site is run by San Francisco-based nonprofit Urban Alchemy, which provides on-site services, as well as outreach to the surrounding area. The organization is tasked with client intake and care coordination, custodial and sanitation services, de-escalation intervention, security and handling of overdoses.

“Living at the Safe Sleep Village affords people to sleep with both eyes shut,” said James Winfrey, a director of operations at Urban Alchemy. “They don’t have to worry about being raped, being mugged or items being stolen. It’s the first place of respite in this pathway to more supportive housing.”

A few residents of the site told KTLA they had not been informed about how to connect to services, including mental health professionals or case management for housing help. In response, an Urban Alchemy spokesperson said all services will begin by July 1.

The goal is to get the residents of the tent village into affordable permanent supportive housing — though the next step may be a tiny home village. Winfrey said around 20 people have already moved from the tents into tiny homes in Echo Park, also run by Urban Alchemy.

“It’s no one housing solution that is going to be the panacea,” O’Farrell told KTLA.

O’Farrell’s office secured the parking lot for the village at no charge, but the program’s price tag — which comes close to the cost of average monthly rent in L.A. — has drawn criticism.

But O’Farrell points to studies that found the cost to taxpayers of leaving someone chronically homeless is as much as $30,000 to $50,000 a year in services like emergency care.

“It’s an investment of people who deserve to be invested in,” the councilman said. “It’s much less expensive to invest in an individual to get them on a pathway to wellness than it is to keep them homeless.”

O’Farrell said that many of those who have been living on the street for years wouldn’t be prepared to take care of the responsibilities required if they moved into an apartment right away.

“People who have been traumatized by homelessness need some kind of entry into a managed safe environment because they aren’t used to that, so it’s one step at a time,” he said. “It’s naive to think you can take someone who is addicted to meth, living in a tent in their own filth and put them in an apartment somewhere and they’re gonna be just fine on their own. That doesn’t work.”

The tent village will be operational through the end of this year — before work begins on the supportive housing project, like the Proposition HHH-funded building across the street from the parking lot.

And L.A. Councilman Mike Bonin has also proposed looking into the feasibility of using several locations in his westside district for tiny homes or safe camping for homeless people.