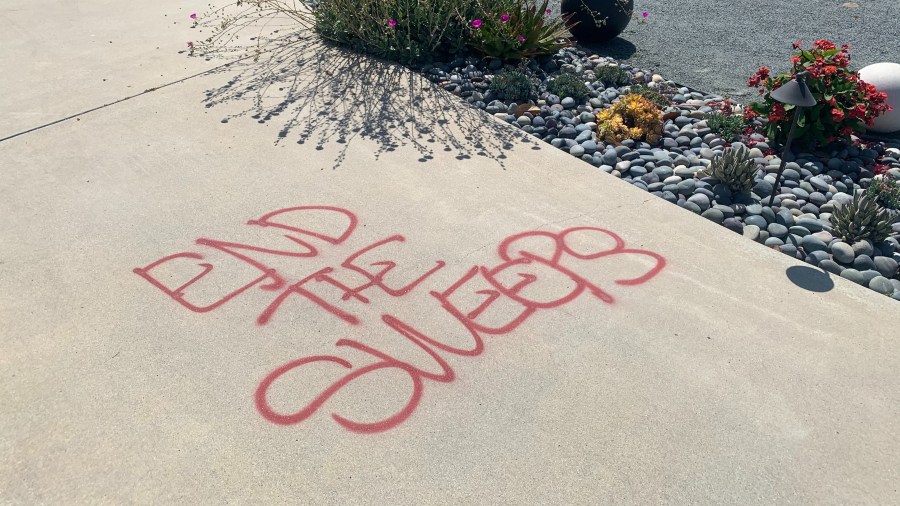 by: Erika Martin, with additional reporting from KTLA’s Alyssa Kelly

Los Angeles City Council President Nury Martinez said she woke up Friday morning to find the driveway and a vehicle outside her Sun Valley home had been vandalized.

The vandalism involved the words “end the sweeps” graffitied in red letters on the council president’s driveway, an apparent response to the city’s practice of forcibly removing homeless people from their living spaces, such as the recent clearing of Echo Park Lake.

A white substance was also poured onto the family’s vehicle, Martinez said.

The incident was captured on home surveillance video released by Martinez’s office. That footage shows a timestamp of just before 2 a.m., but L.A. police Officer Tony Im said officers responded to the home shortly after midnight Friday.

Im said officers took a vandalism report and conducted an investigation, but the Police Department was not releasing further information.

In a Zoom interview with KTLA, Martinez said the vandalism occurred outside her 12-year-old daughter’s window.

“For an entire year, I’ve been dealing with threats, harassment, and now vandalism,” she said. “It’s not going to stop me from doing my work in carrying out what my constituents elected me to do, or keep our city from running. I’m not going to live in fear, and I’m certainly not going to legislate in fear.”

The surveillance video shows two hooded individuals were involved, but investigators have yet to release suspect descriptions.

No arrests have been made, and LAPD is continuing to investigate, according to Im.