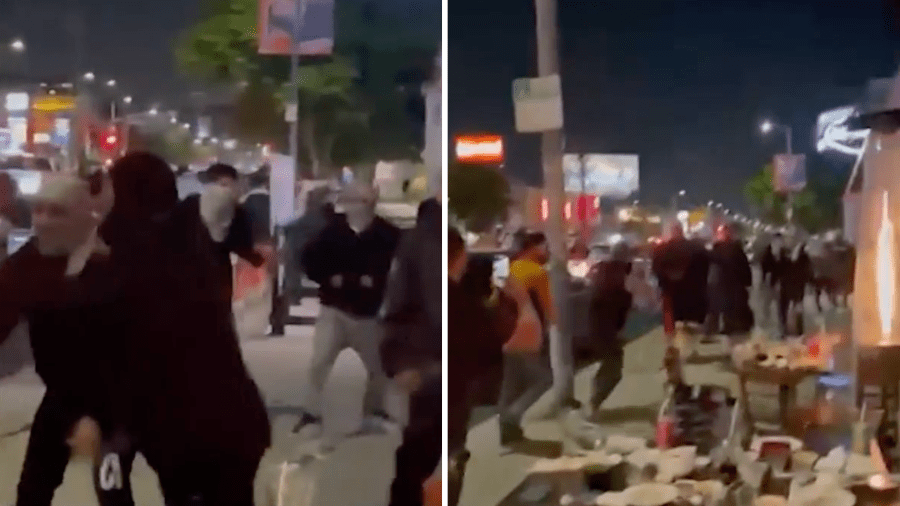 A man was arrested Friday in connection with the attack on Jewish diners in Beverly Grove earlier this week, the Los Angeles Police Department announced.

The man was identified as 30-year-old Xavier Pabon, a resident of Banning.

The caught-on-video incident started around 10 p.m. Tuesday, when a caravan of vehicles displaying Palestinian flags drove by the Sushi Fumi restaurant in the 300 block of North La Cienega Boulevard, a witness who wished to remain anonymous told KTLA.

The witness said that a group of men jumped out of their vehicles and asked some diners if any of them were “Jews.” Two men replied that they were, and a fight broke out with punches and items being thrown between a large group on a sidewalk, according to the witness.

Patrons were rushed inside the restaurant and police were called to the scene to restore order.

LAPD later determined there were five victims involved in the incident, which is being investigated as a hate crime.

Tips from the public poured in, and investigators were able to identify one of the primary suspects and track him down to a home outside Los Angeles, according to a Saturday LAPD news release.

On Friday night, Pabon was taken into custody with help from the United States Marshal Service task force. He was arrested on suspicion of assault with a deadly weapon.

“LAPD has requested his bail be enhanced due to the crime being motivated by hatred,” the department said, adding that detectives will be seeking additional charges for hate crimes.

Officials did not clarify what weapon he is accused of using.

Video obtained by KTLA appeared to show a man using a velvet rope’s metal stanchion to hit others.

“The LAPD will continue to work diligently to identify, locate, and arrest the other suspects in the May 18, 2021 assault,” the department said.

No further details were available.

Anyone with information on the incident is asked to contact the LAPD’s Wilshire Division hotline at 213-922-8230 or email WilshireMAC@lapd.online.  Those who wish to remain anonymous can call Crime Stoppers at 1-800-222-8477.