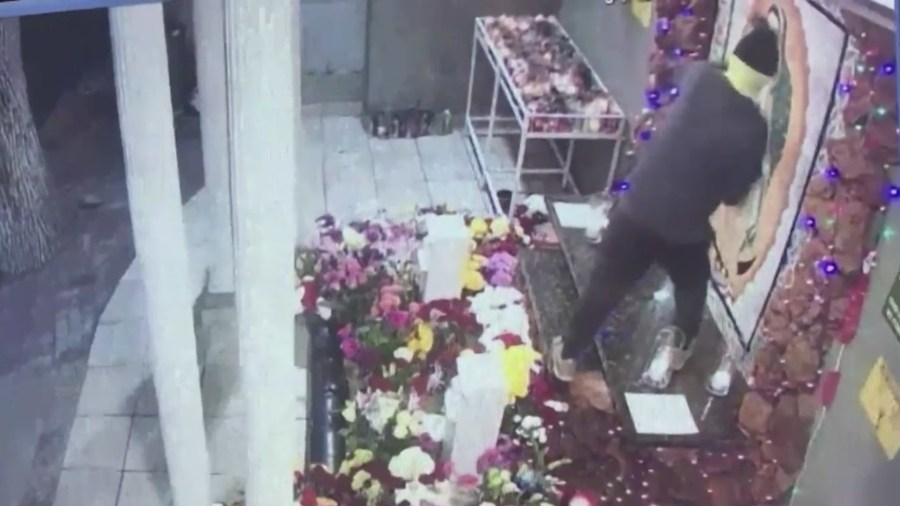 A masked man armed with a sledgehammer was caught on camera Wednesday bashing in the face of a Virgin of Guadalupe statue multiple times at a Van Nuys church.

Father Vito Di Marzio with St. Elisabeth Catholic Church was inside when he thought he heard a few loud knocks.

“I went to my window to see what was happening, but it was all gone,” he said, adding that the devastating news was confirmed to him that morning. “I was speechless and it was unbelievable.”

The mural was hand painted 35 years ago and served as a symbol of unity.

“It’s actually, for me, like doing it to your own mother,” Sister Angelie Marie Inoferio said.

Inoferio said she’s devastated but instead of being angry, she used the act of hate as a lesson.

“It’s a teaching moment for the school. We have to do some kind of reparation and give the children, and the whole school, an example of forgiveness,” Inoferio said.

Still, she’s asking for police to find the person responsible for desecrating the blessed mother.

“We cannot judge what is really inside of him, maybe it’s a cry for help,” Inoferio said. “For now, we are praying, hopefully that person someday will be converted and realize that what he did is wrong.”

The suspect was seen wearing all black and had a yellow or light green gaiter mask around his neck and face.

Anyone who recognizes the suspect is asked to call Los Angeles police.