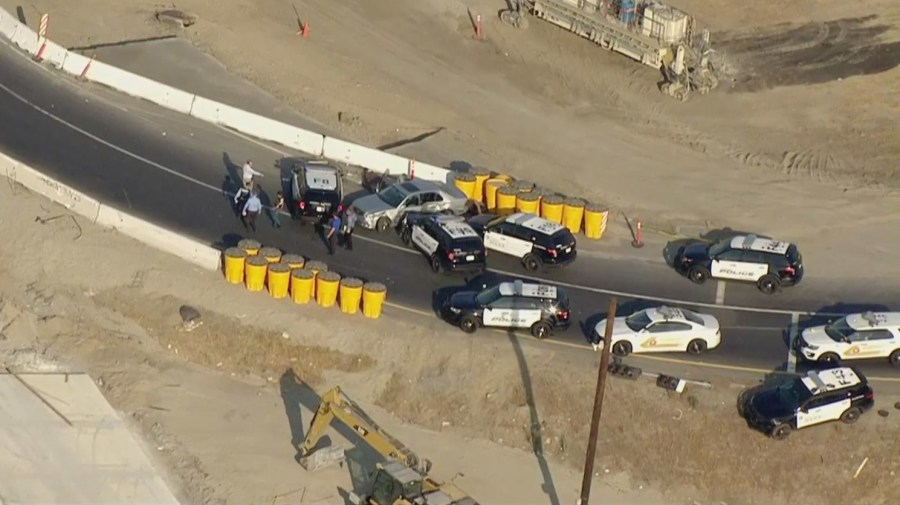 A man died after being shot by police at the end of a pursuit on an off-ramp to the 10 Freeway in Ontario Monday, officials said Tuesday.

Fontana police had initially tried to pull the car over just before 3 p.m. Monday, but one passenger ran from the car and the driver fled with a female passenger in the back seat, the Fontana Police Department said in a news release.

Officials did not say why they initiated a traffic stop, but said the sedan was stolen and had license plates from another vehicle. They also allege that a gun was later seen on the front seat.

Officers chased the sedan onto the westbound 10 Freeway. The driver exited then returned to the interstate several times before getting onto the eastbound 10, where he exited at Milliken Avenue, authorities said.

The man tried to make a U-turn at the top of the off-ramp, and officers executed a PIT maneuver to successfully box him in, according to police.

Officials allege the man then tried to drive his car into police officers’ vehicles, prompting at least one officer to open fire.

The man was struck and taken to a hospital, where he later died.

On Monday, Fontana police said the female passenger was taken into custody, but Tuesday’s new release states she was “pulled to safety” and does not mention her being detained.

The driver was not being publicly identified, pending the notification of his next of kin.

The officer involved has been placed on administrative leave in accordance with department policy.