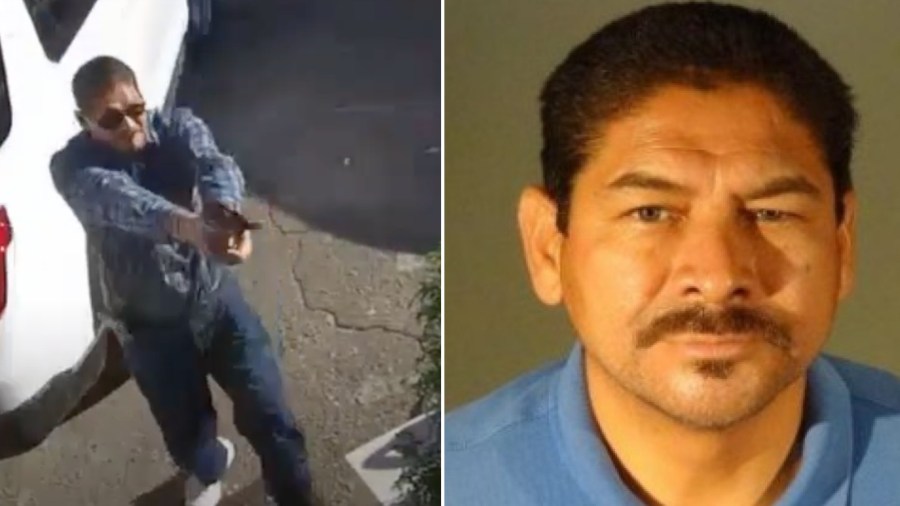 A man who fled after fatally shooting his ex-girlfriend in front of their young child in Pacoima earlier this week killed himself as officers approached him in Irving, Texas, authorities said Saturday.

Herbert Nixon Flores, 46, was wanted for killing his former partner, 35-year-old Karen Ruiz, in the presence of their 3-year-old child on Wednesday morning, according to LAPD.

The Los Angeles Police Department had released footage from a home security camera that captured the incident.

It shows a woman exiting her vehicle and running toward a door while screaming for help after seeing a man who had pulled up behind her. The man chased her and shot her several times near the doorstep, video shows.

A crying child is heard in the video as the man fled, while somebody from inside the home says “he killed her.”

Officers responded to the scene around 9:30 a.m. in the 9000 block of Bartee Avenue, where they found the woman with multiple gunshot wounds. Paramedics pronounced her dead at the scene, LAPD said.

Investigators later identified the shooter as Flores, who allegedly had been stalking and threatening the victim, the mother of his child, for months. The toddler was safe with family members, LAPD said after the shooting.

“[Ruiz] had several reports made against him over the years and most recently she took out a restraining order against him due to some violent acts he committed against her,” LAPD Detective Sharon Kim previously said.

The officer described Flores as an MS-13 gang member with a violent criminal history.

In announcing the suspect’s death on Saturday, the Irving Police Department in Texas said investigators determined that Flores was visiting family in the city.

Irving police said they helped an FBI fugitive task force locate Flores in neighboring Arlington, where officers saw him going inside a vehicle and began traveling towards Dallas.

Ground and aerial units with the Dallas Police Department assisted in tracking Flores, according to Irving police.

“Flores realized that he was being followed, abandoned his vehicle, and began walking on foot,” a statement from the Irving Police Department said. “Once Flores saw marked police pulling up on him, he killed himself with one self-inflicted gunshot wound from a handgun he had on his person.”

Irving police did not disclose further information about the attempted arrest, noting that the investigation is in its early stages.