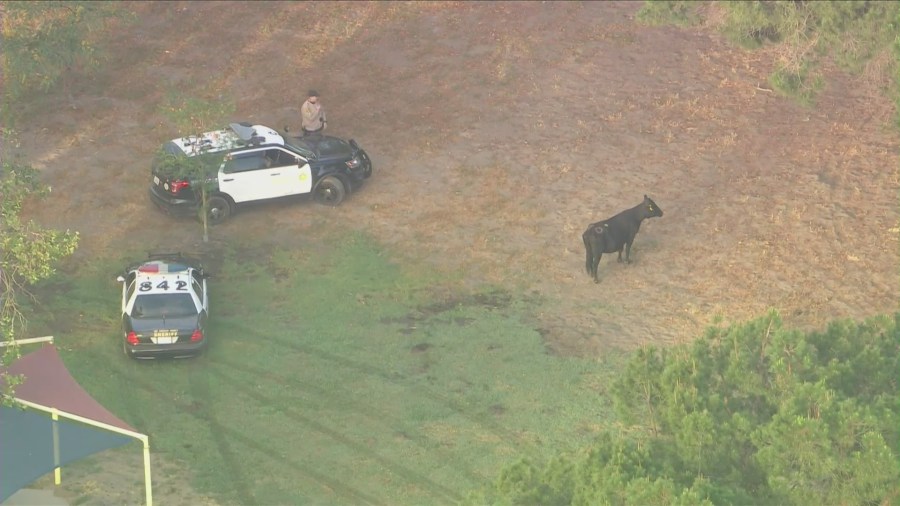 A missing cow that was part of a herd of cattle that slipped out of a local slaughterhouse earlier in the week resurfaced at Whittier Narrows Park in South El Monte on Thursday.

At about 6:30 a.m., video from Sky5 showed the lone cow at a standstill for several minutes in a field at Whittier Narrows Park.

But at one point, the cow forcefully knocked down a man who was at the park with another man trying to wrangle the animal, video showed.

The man got up and continued to try and lasso the cow, who appeared to be tangled in a tree.

Several law enforcement officials also responded to the park and were seen surrounding the cow with their vehicles.

The herd of 40 cows escaped on Tuesday evening about 7:30 p.m. and were roaming around the area of Beverly and Rosemead boulevards, but most of them were corralled shortly after in a Pico Rivera cul-de-sac later that night.

One of the cows was shot by a Los Angeles County sheriff’s deputy as it charged at a family of four while deputies worked to contain the livestock, officials said.

The cows had escaped from a meat packing facility after a gate was accidentally left open.

Yankees’ Zach Britton on substance checks: ‘Optics are absolutely embarrassing for our game’

After pandemic and amid political division, looking for kindness wherever it exists