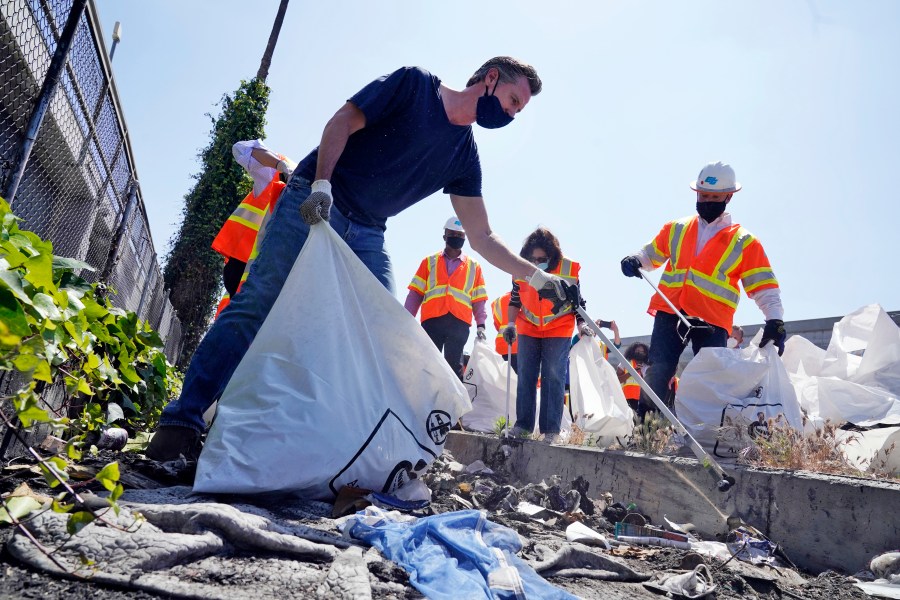 Gov. Gavin Newsom on Wednesday kicked off California’s $1.1 billion plan to clean trash and graffiti from California’s highways, roads and other public spaces, an effort he said will beautify the state and create up to 11,000 jobs.

“This is an unprecedented effort to acknowledge what all of us recognize as we drive around this state: It’s too damn dirty!” Newsom said from the side of a San Francisco Bay Area highway.

At-risk youth and people who were formerly homeless or formerly incarcerated will be given priority for the jobs created by the three-year program. In the last week, he said 400 people have already been hired or offered a job, Newsom said.

The cleanup comes amid growing frustration with homeless encampments that have sprouted under highway overpasses and near freeway exit and entry ramps throughout California in the last few years. The encampments have grown during the pandemic, and many are crammed with discarded sofas, mattresses, and other trash.

An estimated 161,000 people are experiencing homelessness in the nation’s most populous state, more than in any other. Advocates say they can’t house people quickly enough with a shortage of housing units and high rents.

The Clean California program funds are not allowed to be used to displace people experiencing homelessness.

The Democratic governor, who faces a recall election this year, pointed out Wednesday that he has proposed $12 billion to get more people experiencing homelessness off the streets and into homes of their own.

“When our teams are out there on encampments notifying people of our intent to clean up an encampment, we’re doing so with more resources than any time in California history to follow through on our commitment to get people housed, and get people out of these dangerous environments,” he said.

California’s transportation agency, Caltrans, is responsible for maintaining many of the roadways but has struggled to keep up. Newsom’s office said Caltrans collected 270,000 cubic yards of trash in 2020 — enough to load 18,000 garbage trucks.

John Cox, a Republican candidate for California governor, has been campaigning with an 8-foot (2.4-meter) ball of trash to tout his homelessness plan, which calls for forcing homeless people into mental health or addiction treatment before providing them with housing.

The beautification plan will be a partnership with cities and counties, which will receive one-third of the money in grants, the governor said.

“Those dollars will be leveraged well beyond a billion-dollar state investment because we’re going to leverage local dollars with a matching program,” he said.

Newsom first announced a $1.5 billion Clean California initiative on May 14, but the funding decreased to $1.1 billion in the final budget the governor signed last month.