Nicole Kidman’s ‘The Undoing’ Is No ‘Big Little Lies’

Big Little Lies was the right show at the right time. A glossy, star-packed, surprisingly smart murder mystery, it appeared just as it seemed HBO was devolving into the Game of Thrones channel and proved that the brand The Sopranos built could still spin character-driven drama into a cultural phenomenon. Network executives responded by doing what network executives always do: they tried to replicate it. A miniseries adapted from the novel by Liane Moriarty, it delighted fans with a renewal that was never supposed to happen; Meryl Streep joined the cast for the not-bad but not-necessary 2019 sequel. Meanwhile, between the two seasons, HBO hired Lies season 1 director Jean-Marc Vallée to helm another show based on a best-selling whodunit, Gillian Flynn’s Sharp Objects, featuring another A-list, female-led cast. It was a fantastic adaptation, more potent and profound than its predecessor, albeit a bit too dark for viewers craving more Monterey moms.

For a while now, critical and awards darling Succession has filled the role of HBO’s breakout drama. But that doesn’t mean the network is done trying to reverse-engineer another Lies. Its latest attempt, premiering Oct. 25, is The Undoing. Based on Jean Hanff Korelitz’s 2014 novel You Should Have Known, the six-part psychological thriller reunites Lies mastermind David E. Kelley—as creator, writer and showrunner—with star Nicole Kidman. Once again, there’s a big-deal cast and a name director (Susanne Bier of The Night Manager and Bird Box fame). The story features rich, gossipy moms and an elite school and a slowly escalating murder investigation. Yet this time, neither the sharp performances nor the lush window dressing can save scripts littered with predictable plot twists, hoary genre clichés, thin supporting characters and relatively little to say.

Kidman plays Grace Fraser, a Manhattan therapist who has everything going for her: a charming pediatric oncologist husband (Hugh Grant), a curly-headed preteen son (Noah Jupe from A Quiet Place), a super-rich financier father (Donald Sutherland), a multimillion-dollar Upper East Side home and a gaggle of similarly fortunate friends in her fellow Reardon School mothers. A notch wealthier, smarter, more attractive and, by virtue of their respective professions, more outwardly virtuous than the other impressive couples in their circle, the Frasers clearly pride themselves on their self-awareness about the snobbery of that cohort. Into this idyll crashes Elena Alves (Italian actor Matilda De Angelis), a new Reardon parent from—gasp—Harlem who quickly becomes the talk of the fundraising committee. Young, sexy and free enough with her body to whip out a breast and feed her infant in the middle of a meeting, she fascinates Grace, the only mom who offers her anything like a warm welcome.

Matilda De Angelis in ‘The Undoing’

Elena is magnetic; the sexual tension between her and Grace is immediate and almost oppressive, as the younger woman’s tempestuous, exhibitionistic behavior appears to activate her new acquaintance’s professional, psychological curiosity as well as her infatuation. Before that story line has a chance to develop, however, Elena’s older child (Edan Alexander) discovers her dead, the victim of a savage murder. To Grace’s shock and horror, the husband with whom she’s built such an enviable life is identified as the prime suspect. Grant’s character Jonathan has, it turns out, been carrying on an affair with Elena since long before the two women met. By the time law enforcement starts searching for him, Jonathan is nowhere to be found. Is it remotely possible that this guy didn’t do it? And, either way, how could a smart therapist so fully misread her own husband?

The setup feels too familiar: Big Little Lies also placed a young mother (Shailene Woodley) in an older, more moneyed female milieu—a plot catalyst rooted in one man’s horrible secret. As she did in that show, Kidman embodies a character who vacillates between insight and self-delusion, porcelain-doll fragility and quiet determination. She plays this kind of role so startlingly well, with such haunted, heartbreaking physicality, that it’s hard to object to what probably, by now, qualifies as typecasting. The same goes for Sutherland, whose refined, patrician yet selectively vicious patriarch, Franklin Reinhardt, represents a minor variation on his portrayals of J. Paul Getty in FX’s Trust and President Snow in The Hunger Games movies.

But it’s Grant who makes the strongest argument for watching what is, outside of the acting and the top-shelf wealth porn (Grace’s outerwear budget alone must rival New York City’s median annual income), a pretty mediocre show. He imbues Jonathan with the same witty, self-deprecating charm that made the actor such a sensation in the romantic comedies of the ’90s—not to mention got Grant off the hook with the public after a deeply unromantic 1995 arrest, in time to make the prototypical rom-com of the era, 1999’s Notting Hill. All the layers of his image are present in this performance, one that understands the effect Grant has on audiences and so seduces us just as it does Grace. Jonathan might be a classic, caddish but ultimately lovable Hugh Grant character, the kind whose flaws are limited to philandering. Then again, he might be a much darker sort of man who’s deceiving his family with an extremely convincing Hugh Grant act. 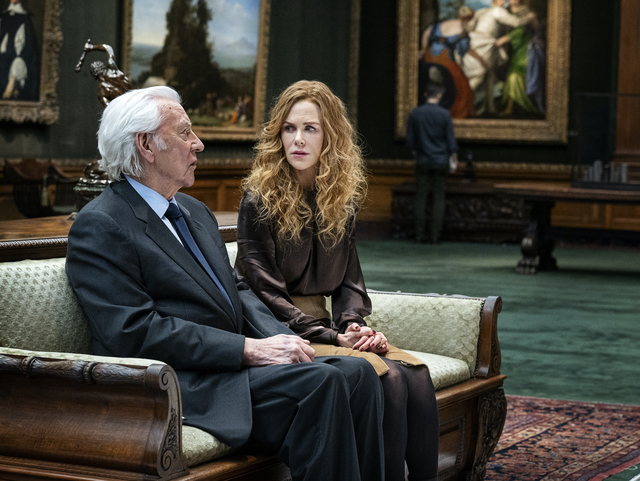 Donald Sutherland and Nicole Kidman in ‘The Undoing’

When he and Kidman are on screen together, The Undoing sometimes achieves the riveting tension that eludes it elsewhere. For the most part, though, the show is weighed down by both lazy writing and an overabundance of similar crime stories in pop culture. Grace and Jonathan aside, the characters are under-developed to an extent that feels, in the context of a murder mystery, almost like cheating. In the five episodes screened for critics, we spend time with a detective (Edgar Ramirez) who has an unexplained chip on his shoulder and a lawyer friend of Grace’s (Lily Rabe) who functions purely to move the plot forward. The Frasers’ son, Henry, is a mature boy who plays violin. And Elena might as well not speak, for all her dialogue tells us. Despite the efforts of talented actors, some characters of color verge on stereotypes: Elena’s husband (Ismael Cruz Córdova) is the angry Latino guy, while Jonathan’s defense attorney (Noma Dumezweni) is the kind of tough, super-competent Black woman who makes white men quake in their loafers. These flat, thoughtless depictions undercut the salient themes of a show that is, in large part, about the distance between the images people project and who they really are.

On a structural level, The Undoing falls into the same trap as many other TV thrillers, planting big twists at the end of each episode while spreading plot points too thin throughout the first 50 minutes. (Now that TV has overtaken film, we’re seeing a lot of miniseries that should’ve been movies.) Kelley touches on intriguing subjects, from the public’s love-hate relationship with the 1% to romance as an act of projection, without offering much insight. We’ve seen a revolution in realistic depictions of mental health on television over the past few years—an overdue and overwhelmingly positive development. But mental illness too often functions as a deus ex machina for crime dramas now, with neat diagnoses such as narcissism or sociopathy or PTSD replacing messily specific characterization; that eventually becomes a problem here, too.

The Undoing is the kind of drama that, in the past, I’ve tended to enjoy regardless of quality. Which is to say, I am its target audience. Unfortunately, TV trends can be a bit like marriages: if they don’t evolve over time, the flaws overtake the pleasures.

Opinion | We Dared to Assemble. For That, We Were Killed.

For Manchin, a Divided Senate Is a ‘Golden Opportunity’ for Action