Pursuit ends in standoff on 91 Fwy in Fullerton with suspect wanted in 3 separate L.A. area shootings 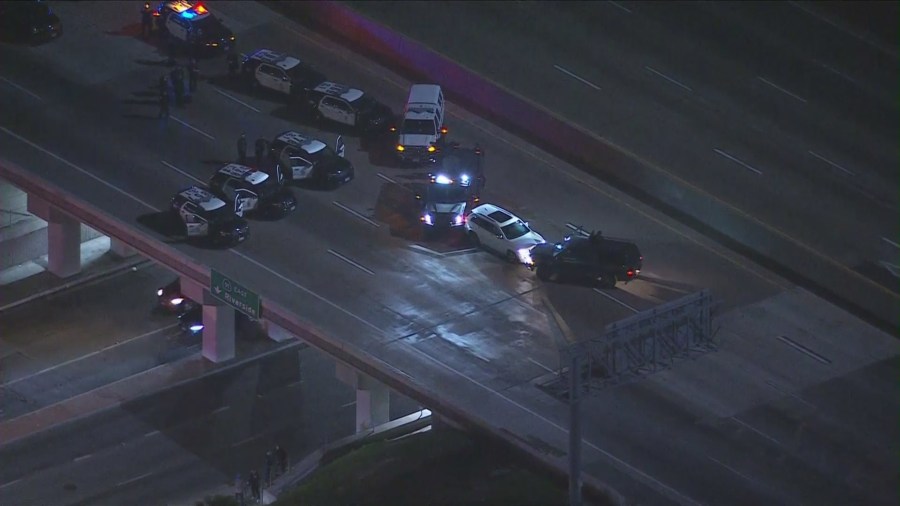 A suspect wanted in three separate Los Angeles area shootings was in a standoff with officers on the 91 Freeway in the Fullerton area near Anaheim early Tuesday morning, according to the Los Angeles Police Department.

The standoff followed a chase of a white SUV that police believe was involved in a string of drive-by shootings that left two people dead.

Video showed the 91 Freeway had almost come to standstill around 4:15 a.m. as police faced off with the suspect, who was in the white SUV stopped between two armored vehicles. The freeway was closed in both directions at Raymond Avenue.

Shortly before 5 a.m., officers were seen deploying what appeared to be some kind of chemical irritant into white SUV, video from Sky5 showed.

A SWAT team then approached the passenger side of the vehicle with their guns drawn. Shortly after, someone from the SUV was then seen being treated by paramedics on the freeway as the closure continued and traffic was being diverted away.

The string of shootings began in Exposition Park near the University of Southern California.

The first of the three shootings was reported at 12:55 a.m. at Figueroa Street and Exposition Boulevard, where the suspect vehicle drove up to a car and fired several shots inside, LAPD said. The victim, a 43-year-old man, was listed in stable condition, though officials didn’t provide information on any injuries.

The second shooting was reported at 1:23 a.m. at a Starbucks drive-thru in the area of 28th and Figueroa streets in University Park. The victim, a 25-year-old man, suffered multiple gunshot wounds and was pronounced dead at the scene, police said.

The third shooting was reported just minutes later nearby at 7th and Figueroa streets in downtown Los Angeles. The victim, a 30-year-old man, was stopped at a red light in his black Escalade when the suspect pulled up next to him and fired several shots inside, killing the victim, LAPD said.

At that scene shortly after the shooting, a man told a photographer he was waiting for his Uber driver, only to find out the driver he was trying to reach was the man killed in the shooting. He showed the ride request on the app on his phone.

No further details were immediately available. Officials have not identified the suspect or men killed.

Indians players ‘free to make their own choices and decisions’ after pitcher’s anti-vaccine post, GM says