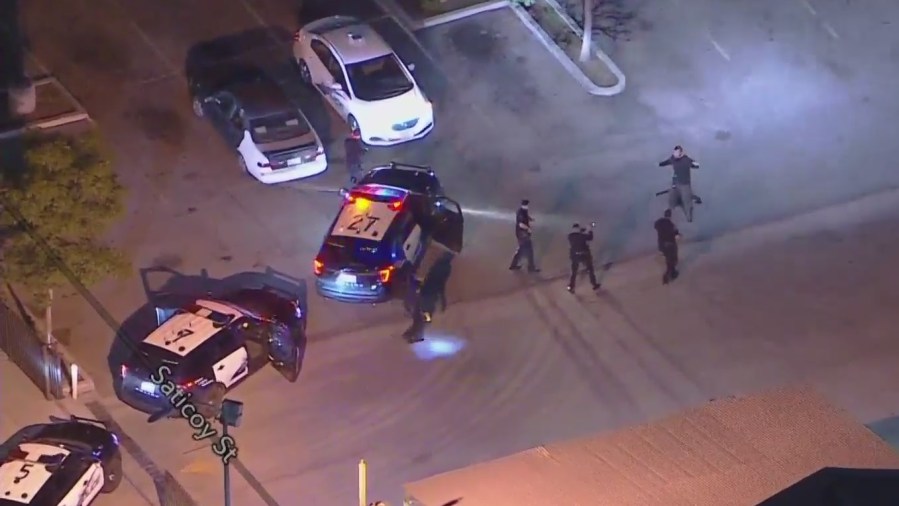 A man suspected of being under the influence when he stole a Burbank police parking enforcement vehicle and fled from authorities was detained in Sun Valley Thursday evening, officials said.

The incident started at about 6:25 p.m., as a couple of parking supervisors were conducting an unrelated parking investigation in the Rancho Marketplace Shopping Center on Alameda Avenue and Main Street, said Burbank police Lt. Derek Green.

A man got into their marked vehicle and “basically stole it,” Green said.

Police believe the man was under the influence of either drugs, alcohol, or both.

The parking officers put out an alert and within a few minutes, officials spotted the car. Police caught up with it in Glendale, and the pursuit went back through Burbank and into the San Fernando Valley.

Sky5 arrived above the chase at about 6:45 p.m., as the car was speeding down Vanowen Street in North Hollywood.

Just before 6:50 p.m., it pulled into a parking lot near Saticoy Street and Tujunga Avenue in Sun Valley, aerial footage from Sky5 shows.

The driver parked the vehicle and got out. Just as he exited the car, at least three patrol vehicles pulled up and several officers confronted him.

Officers approached the driver and tackled him before taking him into custody.

The suspect was subsequently taken to a hospital for toxicology tests and as a precaution because of the rough arrest, Green said.

Police believe they know the man’s identity, but won’t be able to verify it until he’s booked. He remained in the hospital after 9 p.m. Thursday, Green said.

Upon his release, he was expected to be booked on suspicion of grand theft auto, felony evading, resisting police and, likely, driving under the influence, according to Green.