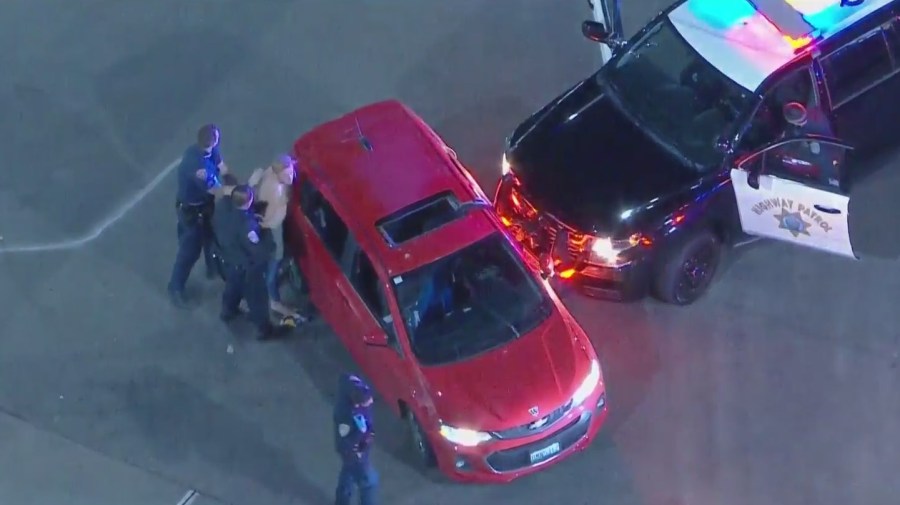 A pursuit of a reckless driving suspect wound its way across several Los Angeles freeways before ending when authorities crashed into the driver at a gas station in Eagle Rock Thursday night.

Sky5 arrived above the chase at about 9:15 p.m. as the car was headed south on the 101 Freeway just north of Hollywood.

The car was moving swiftly with few other vehicles on the road. At least two California Highway Patrol vehicles were chasing it with sirens engaged.

Officials could not immediately confirm when or where the pursuit began, but Los Angeles police Officer William Cooper said the motorist was suspected of reckless driving.

The car exited the freeway at Union Avenue and headed onto surface streets in Westlake and into downtown L.A.

Items appeared to be thrown from the vehicle as it wound around the area, blowing through intersections.

At about 9:30 p.m., the pursuit vehicle got onto the northbound 110 Freeway headed into northeast L.A., where it exited the freeway at Avenue 52 in Highland Park.

Officers pulled back from the chase as the car maneuvered dangerously through residential areas of Highland Park, but continued tracking the vehicle as it headed into Glassell Park.

Eventually, CHP began chasing the vehicle again on the 134 Freeway, and it exited at Figueroa Street in Eagle Rock.

Just before 10 p.m., a CHP SUV crashed into the driver’s side of the pursuit car in the parking lot of a Chevron station at Colorado Boulevard.

Officers pried into the back windows of the vehicle, pulling the driver out and taking him into custody.

Firefighters responded to the scene and were seen placing the handcuffed pursuit driver onto a stretcher. The man sat upright and appeared alert before he was loaded into an ambulance.

Authorities could not immediately confirm the driver’s identity, and no further details were available.