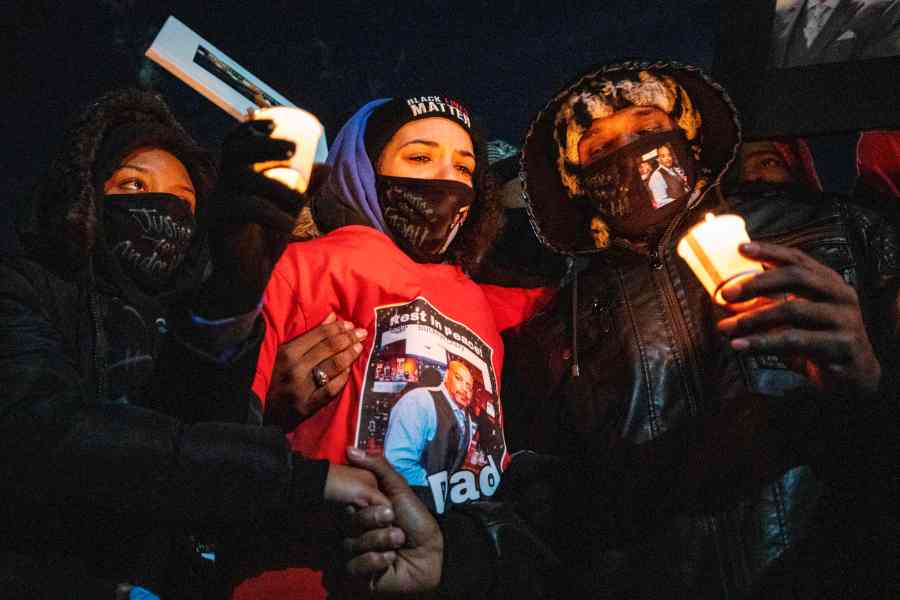 An officer on the scene of the fatal shooting of Andre Hill in Ohio’s capital city last week didn’t perceive any threats and didn’t see a gun, contrary to a mistaken claim by the fellow officer who killed Hill, according to records released Tuesday.

The records provide new details into the Dec. 22 shooting of 47-year-old Andre Hill, a Black man who was fatally shot by Officer Adam Coy, who is white, as Hill emerged from a garage holding a cellphone with his left hand and his right hand not visible.

The city fired Coy on Tuesday, accusing him of incompetence and “gross neglect of duty,” among other charges.

Columbus Officer Amy Detwiler said she saw a man — later identified as Hill — walk away from a car after arriving at the scene of the non-emergency call, according to a summary of her internal affairs interview released Tuesday. Coy had gotten there first. Detwiler didn’t see any interaction between Hill and Coy, but said Coy told her Hill had walked into a next-door garage.

After the officers crossed over to the garage they saw Hill, with Detwiler telling investigators “she felt Mr. Hill may need assistance to enter the residence,” according to her interview.

Coy asked Hill in a “normal tone of voice” to exit the garage and Hill complied but without responding, Detwiler said.

As Hill walked out, Detwiler “did not observe any threats from Mr. Hill,” nor did she see a gun, the internal affairs report said.

No gun was found at the scene, police said.

Reports also indicate that Police Chief Thomas Quinlan felt something was off about the shooting as soon as he arrived, saw the officers and then saw the body cam video.

Coy’s handling of the shooting “is not a ‘rookie’ mistake as a result of negligence or inadvertence,” Quinlan said in his recommendation that the 17-year veteran be fired. Quinlan added that Coy’s actions were “reckless and deliberate.”

A review of Coy’s personnel file shows more than three dozen complaints have been filed against him since he joined the department in January 2002, mostly for rude or abusive language with a dozen for use of force. No details about the allegations are contained in the sparse summaries the city provided from the department’s internal affairs bureau. All but a few were marked “unfounded” or “not sustained.”

Quinlan noted that he had first raised concerns about Coy in 2008, when Quinlan was his patrol lieutenant.

“If sustained improvements are not fully realized a decision whether Officer Coy is salvageable must follow,” Quinlan said, quoting from a letter he wrote.

Coy was fired Monday hours after a hearing was held to determine his employment.

“The actions of Adam Coy do not live up to the oath of a Columbus Police officer, or the standards we, and the community, demand of our officers,” according to a statement from Columbus Public Safety Director Ned Pettus Jr. “The shooting of Andre Hill is a tragedy for all who loved him in addition to the community and our Division of Police.”

Coy had the opportunity to participate in the hearing, Brian Steel, vice president of the police union, told reporters Monday. “He elected not to participate. I do not know why … I would have liked to have him here, but it’s his decision.”

Police bodycam footage showed Hill emerging from a garage and holding up a cellphone in his left hand seconds before he was fatally shot by Coy. There is no audio because the officer hadn’t activated the body camera; an automatic “look back” feature captured the shooting without audio.

Hill lay on the garage floor for several minutes without any officer on the scene coming to his aid.

Detwiler, who joined the department in 2011, has received several commendations over the years for helping injured or stricken individuals. They include a 2018 case in which she and other officers drove a shooting victim to the hospital in a police cruiser after it became clear an ambulance would be delayed, according to a copy of her personnel file released Tuesday.

“Had they not taken this initiative, the victim most likely would have succumbed to her injuries,” the officers’ commendation said.

Trump put Senate Republicans in a real jam. But McConnell hints at a way out.