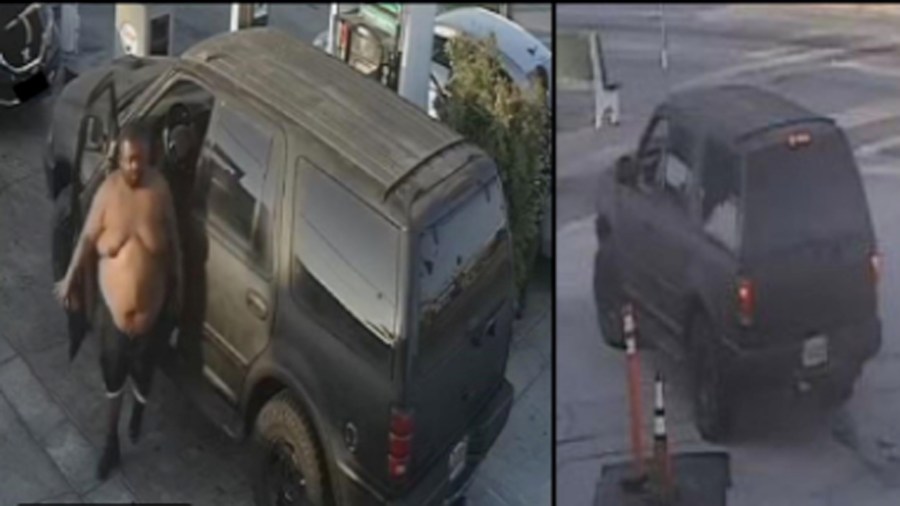 A young mother is sharing her story after a vicious, random beating in which she was the victim was captured on video at a gas station in the Gardena area last week and shared widely in the search for her attacker.

Diana, 25, feels safer knowing that a suspect was arrested later that same day, but she’s still afraid to go outside, she said in an interview Monday at her home in South Los Angeles.

Diana spoke through a Spanish translator and asked KTLA to use only her first name, as she still fears for her safety and that of her 8-year-old daughter.

“I can’t even go to work, and I’m still having nightmares,” she said.

The victim had never met the man who attacked her, unprovoked, on May 30 at a gas station along the 500 block of Rosecrans Avenue. Diana said she was stopping to get gas while on the way to pick up her daughter.

The shirtless assailant, described by investigators as weighing at least 300 pounds, is seen on security video calmly getting out of his SUV before launching into a brutal attack on Diana. He repeatedly pounds and punches her, at one point grabbing her hair and slamming her against her own car.

“I was screaming, and people around me didn’t do anything to help,” the victim said.

Diana said she suffered facial bruising, head trauma and back injuries, but plans to undergo more testing to determine the extent of her injuries.

She says she feels lucky to be alive, but her physical injuries will likely heal sooner than her emotional ones.

“Now I’m afraid this could happen again,” she said. “I don’t feel better, but I feel a little bit secure because he was arrested.”

On Friday, a detective on the case told KTLA multiple people came forward to report they’d been attacked by the same man shortly after the video was released.

US report ‘found that Covid may have leaked from Wuhan lab’