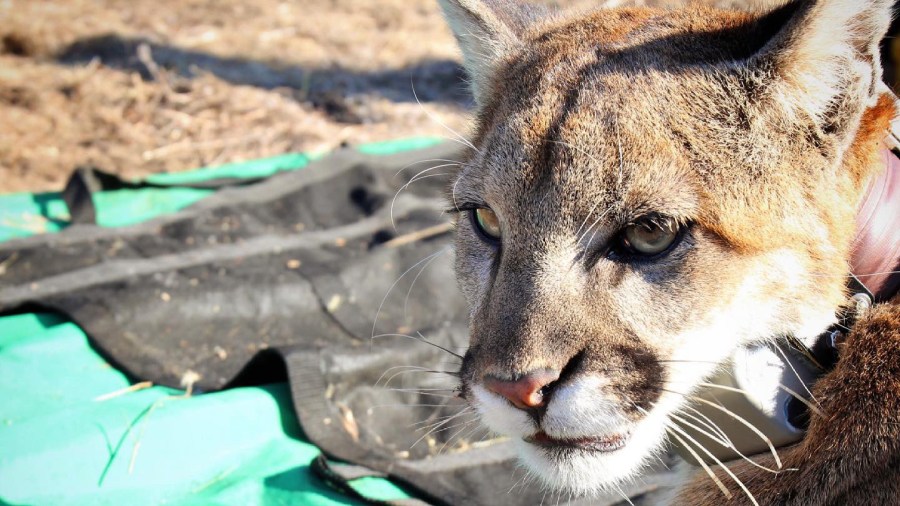 A young female mountain lion is the latest to join the National Park Service’s study of the big cats’ survival in and around the Santa Monica Mountains, officials announced Friday.

The puma, dubbed P-96, was captured Feb. 12 in the Simi Hills and was outfitted with a GPS radio collar that will allow researchers to track her movements, according to the Santa Monica Mountains National Recreation Area.

“There’s a new cougar in town (or, rather, in our study),” the park wrote in announcing her addition on Facebook.

She’s the 96th cat overall inducted into the 18-year study, and joins 10 other cats currently being tracked. Seven of them are in the Santa Monica Mountains, three in the Simi Hills and one — the beloved P-22 — in Griffith Park.

P-96 is estimated to be about 1 year old. She appeared to be in good condition and weighed 59 pounds when she was captured last month, wildlife biologists say.

Officials say she was given “a full work-up,” which included taking her measurements, outfitting her with an ear tag, and the collection of blood, hair and tissue samples for genetic and disease analyses.

Biologists hope the DNA material collected could give them clues about her lineage. The other cat to join the study this year, P-95, is believed to be traveling with his sibling and their mother, but officials did not mention any pumas spotted with P-96.

By tracking the big cats over a long period of time, researchers have discovered that mountain lions are virtually “trapped on an island of habitat,” Ranger Ana Beatriz has said.

Hemmed in by the freeways and the Pacific Ocean, the big cats face myriad challenges in the long-term survival of the species in the Los Angeles landscape, officials say.

Roads represent one major issue, with vehicle collisions among the leading causes of death.

Another threat is the presence of rat poisons, which have caused several mountain lion deaths.

The fragmented territory has also resulted in inbreeding, and the local population has among the lowest genetic diversity ever documented, according to the park service.

L.A. is just one of only two megacities in the world with a population of big cats living in city limits, the other being Mumbai in India.