‘Zoom is not school’: Parents, students rally for schools to reopen in West L.A. 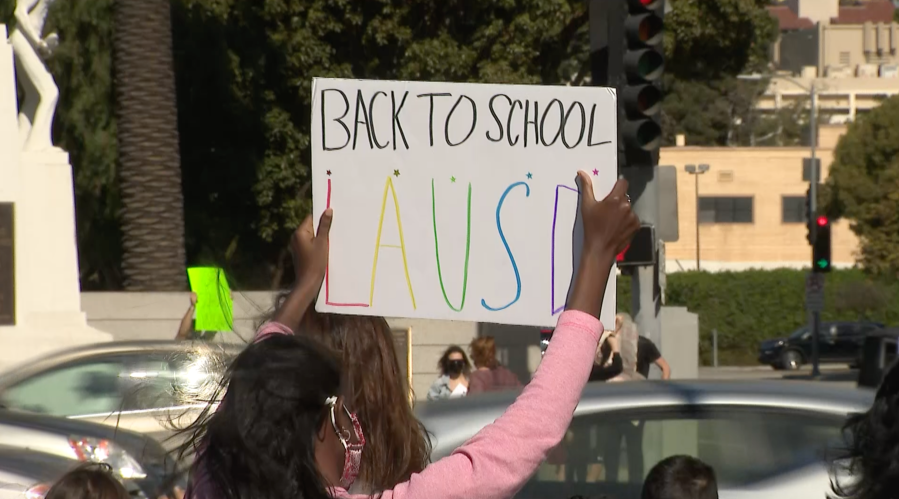 Parents and children gathered Saturday in West Los Angeles to call for schools to reopen, many citing the difficulties students and families faced with remote learning.

One child held up a sign that said “I miss my friends.” Another girl’s sign read “Zoom is not school.” A third raised a crayon drawing of a school bus with the words “open schools now.”

“I still can’t believe I haven’t met my own teacher” one boy told KTLA.

The demonstrators at the West L.A. Federal Building at 11000 Wilshire Blvd. demanded that the Los Angeles Unified School District safely welcome back students for in-person instruction.

Ross Novie, the founder of L.A. School Uprising, a group representing parents, says some kids are being disproportionately affected by the closures.

“We have felt the most vulnerable, we have failed for 180,000 kids of color. We have failed,” he said. “That’s our record so whatever we say we want to do, we’re not doing it, we’re hurting the children, and it’s got to stop.”

On Monday, LAUSD Superintendent Austin Beutner announced schools will resume some services next week for a small percentage of students with special needs, as well as child care and some small group instruction.

But a broader reopening still hasn’t been announced for the nation’s second-largest school district.

L.A. County’s coronavirus case numbers have dropped significantly in recent weeks, enough to reach the state’s threshold that allows the county’s elementary schools to reopen — something Gov. Gavin Newsom has pushed for.

But teachers’ unions and the school district have said it’s still too risky to reopen schools, especially as LAUSD services lower-income communities hit harder by the pandemic than other areas.

“Los Angeles County spans more than 4,000 square miles and communities with very different family circumstances where COVID has had vastly different impacts,” Beutner said earlier this week. “Any average can be misleading.”

The superintendent has pushed for vaccinating teachers to reopen campuses, saying 25,000 people would need to be vaccinated to open just elementary schools safely. He suggested preschools and elementary schools could reopen by April 9.

LAUSD has set up its first school-based vaccination site, but had only received 100 vaccine doses, which were only given to employees 65 and older.

Still a long way to go.

But starting March 1, education and child-care workers of all ages in L.A. County could sign up to get the vaccine, and the health department will be setting aside doses for them.

Newsom announced last week that at least 10% of the state’s vaccines would go to education workers starting in March— that’s roughly 75,000 doses a week.

The U.S. Centers for Disease Control and Prevention has said that in-person schooling can resume safely with masks, social distancing and other strategies, and that vaccinating teachers is not a prerequisite for reopening.

At the rally in West L.A., parents wanted schools open with those safety precautions in place.

“People who are at risk should not go back to school, we understand that,” Novie said. “But there are many more who are OK to go back, and with proper mitigation, we have seen it can be a safe place to teach and work, just like every other workplace that has opened up.”

San Francisco to move $120 million from police to Black community