On Friday, the 31-year-old actress and comedian shared her happy baby news with her millions of followers in an emotional YouTube video.

“Ever since I was a little girl, I’ve always dreamed about being a mom,” she said through tears. “I’ve wanted this for so long.”

In the video, the Netflix star shares the emotional moment in late April where she learned the results of her pregnancy test. Now three and a half months into her pregnancy, Colleen is already showing a growing baby bump.

“I got a bump at eight weeks,” she continued. “I know it’s little. This is my bump and it’s very much showing.”

The sudden changes in her body made it difficult to keep her news a secret, especially while touring the world and making appearances at fan conventions like VidCon!

“I wanted to keep this to myself as long as possible,” Colleen explained. “I wanted to Kylie Jenner all of y’all and let it be just for me … and not talk about it too quickly.”

The announcement video also shares a glimpse at Colleen revealing her pregnancy news to her friends and family – including Frankie Grande, whom she says will be an uncle now.

As for her viral character MirandaSings – who she even starred as in the Netflix series “Haters Back Off” – Colleen hinted that the baby will not stop her from putting on her sloppy red lipstick.

While she tells PEOPLE she “couldn’t be happier” to be a mom, pregnancy hasn’t been easy so far. “It’s been so miserable,” Ballinger admitted, laughing. “I feel like people don’t talk enough about how hard it is. I had no idea.”

“I’ve been very, very sick — just grumpy and moody,” she explained, adding that she’s suffering from “morning sickness” all day. “I’m due New Year’s Day, but I’m hoping it comes this year rather than next. I already feel like I’ve been pregnant for seven years!”

Her mother hasn’t been very helpful guiding her through the process. “When I told her, she had the best reaction — screaming and kissing my stomach. It was very sweet,” Ballinger recalled. “But she told me, ‘Oh it’s wonderful, it’s amazing, I didn’t have morning sickness, it’s going to be so easy, you’re going to love it.’ ” So how’d she and Stocklin learn the good news? Turns out, Ballinger was watching The Handmaid‘s Tale when she started wondering what it would be like to be pregnant. Inspired by the question, she took a pregnancy test — and immediately saw a faint positive.

“I didn’t believe it,” she recalled. “I was so in shock. I probably peed on 40 sticks because I wasn’t experiencing any symptoms yet. I actually told my best friend first to get him to look at one to tell me if I was losing my mind. But there it was.”

She told Stocklin soon thereafter, though he guessed before she got it out. “Later, on the beach, he told me, ‘I just knew the way you were looking at me,’ ” Ballinger explained. “He was so, so excited and had the best reaction.”

Then came their engagement. “He’d been planning it for so long and we’ve been talking for so long about getting married and having kids, but then this happened first,” Ballinger said. “He was like, ‘I don’t want you to think that I did this for any other reason other than that I love you so much.’ It was so sweet.” 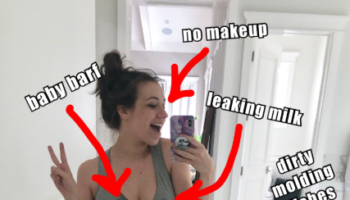